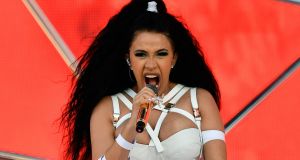 Cardi B: Blame it on the boogie - and the Armenian estate agent. Photograph: Frazer Harrison/Getty Images

Things were bad enough in Nagorno-Karabakh this week before Cardi B decided to get involved. Fighting between Armenian and Azeri forces over the disputed enclave in the Caucasus had already led to at least 250 deaths and the forced displacement of hundreds of thousands of people.

Observers have expressed concern that, with Turkey providing material support to Azerbaijan, and unconfirmed reports of Syrian mercenaries being shipped in, regional powers including Iran and Russia could be drawn into a broader conflict, with unpredictable consequences.

The dispute between the two former Soviet republics has deep and bitter roots, and the contemporary political forces driving the current outbreak are complex and multi-layered.

Who among us has not at some point been unwittingly embroiled in a regional war by their estate agent?

So maybe Cardi, real name Belcalis Almánzar, should have taken more than a moment to think before posting an ad for a fundraiser in support of Armenia to her 76 million Instagram followers on Tuesday.

But the New York rapper, noted for her no-holds-barred feuds with the likes of Nicki Minaj and Azealia Banks, didn’t do so, and as a consequence woke up the next morning to find herself under widespread attack for taking sides, with the topic #cardibsupportsterrorism trending worldwide.

Cue some rapid backtracking. The whole thing, Cardi B explained, was a misunderstanding.

“Yesterday we were trying to sell a property that we have in Atlanta. And our consultant is Armenian and he was really in distress because he was saying there’s a lot of terrible genocides going on in his country, and he said: ‘Can you please post something for a cause, for a good cause, for Armenia?’ And we said: ‘Sure, why not?’ We love to support everybody. And then I wake up and I see a lot of people from Azerbaijan writing me things, writing me stuff, and I did not know that this is a war between two countries.”

Fair enough. Who among us has not at some point in their lives been unwittingly embroiled in a regional war by their estate agent? Unfortunately, it was too late. Cardi’s rapid disaffiliation from the Armenian cause prompted a fresh backwash of outrage. “The fact that cardi didn’t even give a fuck about Armenia and only posted that for some hype or sumn is truly disgusting. @iamcardib you getting cancelled baby” was a fairly typical response.

“I just want peace. I love peace. I want everybody to get along. I don’t want people dying. Nothing. Why do you keep harassing me if keep apologising for it? I don’t know. I don’t fucking know. Have a good night.”

The 24-hour, zero-to-hundred escalation over Cardi’s Instagram post is a function of our hyperkinetic 21st-century social media world, but there’s nothing new about pop stars making idiots of themselves with their pronouncements on faraway conflicts which they barely understand.

During our own Troubles, there was no shortage of ill-informed celebrities ready to offer their unresearched views on the rights and wrongs of the matter.

This week we got a magnificent reprise of that when, in Monday’s instalment of the appropriately titled Armchair Expert podcast, Jon Bon Jovi noted the stark contrast between his own sedate upbringing in suburban New Jersey and that of his near-contemporary Bono on the streets of Dublin.

“His upbringing was obviously very different than mine,” the ageing poodle rocker said. “I never had the Orangemen walking through my neighbourhood saying, you know, get the Catholic kid and beat him up.”

The internet promptly exploded with jokes about Kick the Pope bands terrorising the streets of Glasnevin and Finglas in the 1970s.

“The comments made by Bon Jovi are hardly worth responding to because of their fictitious nature,” a spokesman for the Orange Order said, before, inevitably, responding at some length and inviting the Living on a Prayer singer to improve his knowledge of Ireland’s rich multi-denominational history by visiting the order’s east Belfast museum (a suggestion which, obviously, we should all get behind in the interests of cross-community hilarity).

Of course, none of this matters, you say. Who cares what a bunch of ill-educated narcissists sugared up on their own PR (and who knows what else) think about serious geopolitical issues? After all, it’s not as if these are the kinds of people who ever get into a position to exert real power over real people’s lives. Right?