Writing in the margins: a collection of working-class Irish poetry

We read much about middle-class lives, less about those whose lives are a struggle 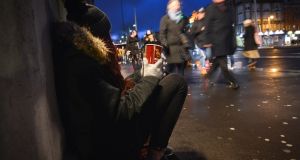 Eoin Devereux’s idea seems mild indeed compared to the solutions to homelessness and poverty presented by Swift in A Modest Proposal (1729), or O’Flaherty’s in A Cure for Unemployment (1931), or Mac Síomóin’s An Immodest Proposal (2014). In our heyday of identity politics, this very first anthology of working people’s poetry in contemporary Ireland highlights another kind of identity – the marginalised, whose concerns are not sufficiently heard: people in precarious employment, unemployed, homeless. The title of the collection – The Children of the Nation – recalls the pledge made by the signatories of the Proclamation of the Irish Republic to cherish “all the children of the nation equally”.

While we read much about comfortable middle-class lives, this is less true about those whose lives are a struggle. This volume seeks to redress that. A non-standard biography for each contributor highlights their connection with the working class, demonstrating that poetry is not an elusive and exclusive domain.

Homelessness is a main theme, casting dark shadows in manifold manifestations. One of these is an overarching feeling of alienation from mainstream society: “The greedy/ rub their hands/ with glee in much the same/ way now as/ they did back then. Over/ a hundred/ and seventy years changed/ nothing. The/ rich get richer and the/ poor grow more/ poor, and most of us have/ nowhere to/ live. For there ain’t no home/ in Dublin.” (Black 47 by Ross J Walsh)

Some poets reflect on being victims of abuse in a society that has relinquished its duty of care for many of its children, its women, its men. Jennifer Horgan and Noel Monahan write heartrendingly about the Tuam babies, or, as Patrick Bolger, about clerical abuse: “The offer is put to me, I should/ accept, I am told as they will never go/ higher, without proof of penetration./ Without proof of penetration./ The eight year old boy, me 23 years/ before this day, should have collected/ evidence. Evidence. My blood. Or his/. Semen.” (Evidence)

Then there is the very real social violence against over 10,000 homeless people. Sarah Boyce evokes this for Belfast: “Its brick-bled and rain-wept heart,/ whose municipal vision cuts through/ its public benches;/ no space here for homeless bums/ Meanwhile, down a high street entry/ great black-backed gulls/ span a crumpled sleeping bag/ in search of carrion. (Its Beating Heart). Tim Dwyer observes in Outside the Garden of Remembrance: “overshadowed, in a curve in the/ Garden’s stone border, in plain view yet overlooked, a grey sleeping bag/ camouflaged against the foundation. A person is hidden, except for the/ crown of the head, some strands of red hair.”

Along with others, Jessamine O Connor highlights hidden homelessness in Notice, which ends: “So my children don’t know what it’s like yet to move, be insecure,/ to not know where you’re going to be, or for how long/, to keep everything always half unpacked –/ but I will never forget.”

Other writers, like Rita Ann Higgins, address unemployment with unrepentant sarcasm: “Hey Minister, we like your suit/ have a bun, where are our jobs?/ But there was no point;/ he was here on a bun-eating session/ not a job-finding session. // His hands were tied./ His tongue a marshmallow.” (No One Mentioned the Roofer)

These themes and countless others emerge from the poetry of people who identify with the disregarded and dispossessed. The anthology is political with a small p. The authenticity of 67 working lives unfolding before our eyes makes for a genuinely unique volume whose contributors hail from Derry to Kerry, Ballaghaderreen to Ballymena, Listowel to Larne, Galway to Dublin, Cork to Cavan and up to Belfast, plus Wexford and Waterford, reflecting both rural and urban experience, and spanning the generations. People in traditionally middle-income jobs, teachers like Billy Craven, forced into short-term contracts by a neoliberal economy, increasingly face the consequences (Ireland’s Having a Boom). Working-class has come to encompass all these groups.

Scott McKendry writes about geese migrating in winter to Belfast’s Shankill Road: “They come at the end of November,/ fleeing the Icelandic freeze; swapping the aurora borealis/ for murals in memory of Stevie McKeag/ and Bucky McCullough;// and those for Cromwell, Cúchulainn, Luther/ and Iron Maiden’s Eddie the Head/ dressed up as The Trooper, moonlighting for the UFF.”(Duck, Duck, Goose).

While all too often, the Irish language tradition is recklessly written out of Irish literature, in this collection gaeilge and bearla stand side by side; indeed the motto for the book is taken from Máirtín Ó Direáin’s poem De dheasca an úis (Because of Usury).

Two of the writers represent the New Irish, Michal Lowkain and Anastasia Kiourtzoglou. Their experience parallels that of several emigrant writers in the anthology, Anne Casey, Aidan Casey or Mike Gallagher, for example. Peggie Caldwell from rural Donegal writes of this experience continuing: “Fallacies echo: Live Register lowest it’s been since 2008.// But in these hills the white noise rebounds,/ the absence of fledgling song deafening us.” (Still They Go)

Along with the British socialist publisher, Culture Matters, the Irish Trade Union Movement was instrumental in bringing this anthology about. Fórsa, UNITE, CWU, Mandate, as well as the Belfast, Dublin and Galway Trades Councils all donated towards it.

Fr Peter McVerry has devoted his life to the cause of the homeless. He is one of the most humane and heroic people in Ireland. We are honoured that he has agreed to launch this book in Connolly Books Dublin, on Saturday, November 23rd, at 3pm.

The Children of the Nation. An Anthology of Working People’s Poetry from Contemporary Ireland, edited by Jenny Farrell, is published by Culture Matters. It is available from Connolly Books, Charlie Byrnes, Galway, Vibes & Scribes, Cork and online