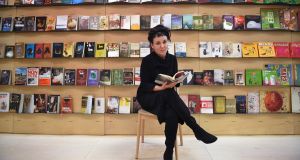 Polish writer Olga Tokarczuk, winner of the Nobel Prize in Literature for 2018, has been longlisted for the International Dublin Literary Award. Photograph: EPA/FACUNDO ARRIZABALAGA

Olga Tokarczuk and Peter Handke, the two latest winners of the Nobel Prize in Literature, are among the 156 authors nominated by libraries around the world for the 2020 International Dublin Literary Award. Tokarczuk, who also won the 2018 Man Booker International Prize for her novel Flight, is nominated for Drive Your Plow over the Bones of the Dead and Handke for The Great Fall.

They are joined on the very longlist by nine Irish authors including Booker Prize winner Anna Burns for Milkman, Costa Novel of the Year winner Sally Rooney for Normal People and David Park, winner of the Kerry Group Irish Novel of the Year for Travelling in a Strange Land.

The other Irish longlisted novels are A Ladder to the Sky by John Boyne; The Woman in the Woods by John Connolly; Begotten Not Made by Conal Creedon; Orchid and the Wasp by Caoilinn Hughes; and Skin Deep by Liz Nugent; and The Trick to Time by Kit de Waal.

With the winner receiving €100,000, the award is the world’s most valuable annual prize for a single work of fiction published in English. Nominations include 50 novels in translation spanning 21 languages with works nominated by libraries from 119 cities and 40 countries.

The book that received most nominations is There There by Native Ammerican debut author Tommy Orange, chosen by 13 libraries in Canada, Greece, Ireland, and the US. The second-most nominated book is Giller Prize winner Washington Black by Esi Edugyan, chosen by 11 libraries in Canada, England, Jamaica, and US. Rooney and Burns each had four nominations.

Organised by Dublin City Council, the 2020 award was launched today by Cllr Mary Fitzpatrick, representing Lord Mayor Paul McAuliffe, patron of the award. Cllr. Fitzpatrick said: “I am very pleased that Dublin City Council continues to support this significant international award. Dublin is a Unesco City of Literature and the Council is committed to further developing the City’s worldwide reputation as a literary destination, a key part of our cultural tourism offering.”

The judges have their work cut out, with just over 140 days to read the 156 titles on the longlist before the shortlist is announced on April 2nd, 2020. Luckily, next year is a leap year. The winner will be revealed on June 10th.

All the novels nominated are available for readers to borrow from Dublin’s public libraries. The full list has been published in a free newsletter, and all details are also on the newly revamped award website dublinliteraryaward.ie.

The award is managed by Dublin City Council’s library service. Mairead Owens, Dublin City Librarian, said: “This great prize affirms Dublin’s commitment to international writers and translators, to literature and creativity. Through this award Dublin, a Unesco City of Literature, brings the worldwide community of readers together to read the works of contemporary writers from all corners of the world.”

US author Emily Ruskovich, who won this year’s prize for her first novel, Idaho, said: “I cannot express how grateful I am to be the recipient of this award. It is very special to me that this is an award in which libraries across the world determine the longlist through their nominations. Libraries are places of kindness, existing for the sole purpose of connecting us to each other and to ourselves.”

2017: A General Theory of Oblivion by José Eduardo Agualusa (Angolan), translated from the Portuguese by Daniel Hahn

2014: The Sound of Things Falling by Juan Gabriel Vásquez (Colombian), translated from the Spanish by Anne McLean

2010: The Twin by Gerbrand Bakker (Dutch), translated by David Colmer

2007: Out Stealing Horses by Per Petterson (Norwegian), translated from the Norwegian by Anne Born

2004: This Blinding Absence of Light by Tahar Ben Jelloun (Moroccan) translated from the French by Linda Coverdale

2003: My Name is Red by Orhan Pamuk (Turkish) translated by Erdag M. Göknar

1998: The Land of Green Plums by Herta Müller (Romanian), translated from the German by Michael Hofmann

1997: A Heart So White by Javier Marías (Spanish), translated from the Spanish by Margaret Jull Costa