Quantum mechanics in Something Deeply Hidden; vicious entertainment in Bunny 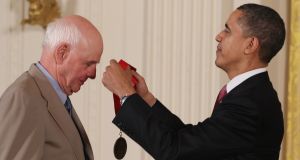 Wendell Berry is an octogenarian Kentucky farmer and writer and these stories chronicle a century of life around the fictional Port William, a small-farming community on the banks of the Kentucky River. The title reflects the idea of loyalty to place, family, neighbours and friends, no matter what difficulties life brings, that underlies the stories. The fate of the Native Americans, slavery, the prevalence of guns – none of these gives any pause for thought to either characters or author. That said, Berry is a thought-provoking writer who uses humour and sorrow to evoke memorable characters, atmosphere and setting. Pray Without Ceasing is a gut-wrenching story of a terrible killing and great forgiveness. By contrast, A Half-Pint of Old Darling amusingly tells of a temperance- and Prohibition-supporting wife getting drunk. – Brian Maye

Before you sit down to read this book, heed the advice on the opening page: “This is a work of fiction. All characters, organizations, and events portrayed in this novel are either products of the author’s imagination or are used fictitiously.” Expect the unexpected and do not expect a straightforward plot. The novel is set at an Ivy League university where a clique of girls who refer to one another as Bunny – think Mean Girls who read Proust over breakfast – attempt to lure the sardonic protagonist Samantha in to their cult. Laden with astute literary references and a cohort of vivid characters, the novel simultaneously parodies and honours female friendship in a highly original manner. It is strange, gothic and viciously entertaining. – Mia Colleran

Sean Carroll is a theoretical physicist working at the Californian Institute of Technology and his latest book explores the central ideas of quantum mechanics, including the multiverse theory, dynamical collapse and particle theory. Using language that is at once functional and poetic, he deconstructs the ways in which those mechanics create a picture of our world and the myriad ways in which we move through time and space. At times overwhelming, at times inspiring, Carroll’s book exists in that liminal space between complex ideas and compelling conversation about complex ideas, providing even the casual reader with accessible insights into the nature of our physical and metaphysical existence. Amidst academic and theoretical controversies that have been raging for years, Carroll offers a voice of qualified reason. – Becky Long

The latest from George Orwell’s biographer DJ Taylor both poses and attempts to answer the question of who the Lost Girls were, examining the concept of women’s creative, personal and social autonomy during a moment in history when the world seemed to be falling apart. The Lost Girls of the title were a group of at least a dozen or so young women operating in London during the Blitz, in a highly manufactured, creative and constrained environment that produced sensational stories of scandal, intrigue and literary achievement. Immersive, intense and dense with detail, Taylor’s latest work is a wonderfully niche and pointed take on lost girls from a lost era; a real-life wartime drama, on an intricate and intimate scale. – Becky Long

Anthologies can be mixed in quality and this, first published in 2006 to mark the 25th anniversary of the Long Kesh hunger strikes, is no different even if contributions come from the heart. Credit to Danny Morrison, nevertheless, who includes enough voices to prevent the book becoming a one-note exercise (a single unionist contributed to this title; would others?). Many pieces feel they’d be better suited as audio. Then you find Colm Scullion’s recollections of sharing a cell with Bobby Sands, composing poetry on the square of wall they have kept clean for this very purpose amidst the no-wash protest. It’s profoundly moving, capturing the conflicted emotions of the time. There are similar images scattered throughout these reflections, adding poignancy to the ongoing narrative of 1981’s legacy. –

Literary characters can be more real for Alberto Manguel than actual people because he believes they have so much to tell us about love, loss and the real world. While he gives his perspectives on characters who are the main protagonists of their stories, such as Alice, Dracula, Faust and Robinson Crusoe, and these are fascinating, of even greater interest and subtlety are his insights into more subsidiary characters, such as Monsieur Bovary, Gertrude (Hamlet), Phoebe (The Catcher in the Rye), Jim (Huckleberry Finn) and Queequeg (Moby-Dick). The characters considered come not only from literature in English but also from other languages, such as the Korean Hsing-Chen, the Spanish Don Juan, the French Émile and the Brazilian Dona Emilia. The thought-provoking interpretations are accompanied by Manguel’s charming illustrations. –