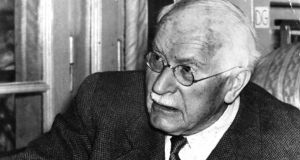 Carl Jung: ‘the only difference between Carl Jung and a madman is that Carl Jung was not a madman’

When I was a student of psychoanalysis at Trinity College, Carl Jung was a figure of faint derision. We were expected to read Sigmund Freud, Melanie Klein and Jacques Lacan, whereas Jung was for your wooly-brained aunt who attends crystal-healing workshops. Beginning to suspect that the bleak materialism into which I had been educated was an inadequate framework of understanding – and that fashion and tribalism are as rife among intellectuals as they are anywhere else – I took an extracurricular interest in Jung’s work, and found it triggered plenty of the paradigm-rocking insights that came thick and fast during that period of life.

To be accurate, I didn’t read Jung so much as the Jungians – the writers who took on the task of communicating Jung’s often stodgily expressed ideas in more inviting prose. The one primary text that did leave a major impression on me was not straightforwardly written by Jung either. When he was in his 80s, Jung had a series of recorded conversations with his colleague and secretary Aniela Jaffé, and the pair shaped from these raw materials as richly strange an autobiography as I’ve read.

Jung acknowledges off the bat that he has little interest in retreading the “outer” events of his life: you won’t find much on who he slept with, nor on his friendships and enmities, bar the one with his great Oedipal frenemy Freud. For Jung, the purpose of life is to make conscious the unconscious self in order to achieve individuation. The royal roads to integrated selfhood are myth, symbol and storytelling, whereas rationalism and doctrinairism are “the disease of our time; they pretend to have all the answers.” Memories, Dreams, Reflections is Jung’s personal myth: “Whether or not these stories are ‘true’ is not the problem. The only question is whether what I tell is my fable, my myth.” The marvellous visions he goes on to describe suggest that, to borrow from Salvador Dalí, the only difference between Carl Jung and a madman is that Carl Jung was not a madman.