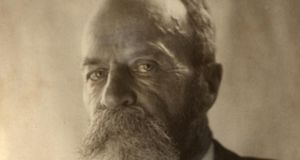 William James helped found pragmatism, a philosophy of free will, action, individuality and authenticity. It was and remains a way of thinking that almost necessitates one’s abrupt exeunt from the crowd.

Goodbyes are a strange social convention. Why not just leave in silence? During a recent trip to London, at a small party in a lovely if claustrophobic pub in Notting Hill, I came to desire nothing more than to vacate posthaste without fanfare. To disappear, really. I didn’t want to be in London at all, but somewhere far away – like Ireland – bidding everyone an “Irish goodbye.”

The Irish goodbye, also known as the French exit, the Dutch leave, or the Swedish exit, avoids the ambiguous, often awkward, moment between staying late and leaving early. Perhaps the term comes from the rapid Irish immigration to America in the 19th century but one thing is certain: the urge is real. It is to cut out – to “ghost,” as we Americans put it – suddenly and without announcement. It is, in a word, rude.

But over the years, and now armed with a philosophical argument, I think the practice isn’t really all that bad. It is certainly better than the “American goodbye”, which is often tantamount to overstaying your welcome and being the last one to depart. It also – in a way that is often overlooked – maintains your sanity and individuality in a culture that seeks to compromise both.

William James, the father of modern empirical psychology and philosophy in America, came to master the act of vanishing. His family had immigrated from Ireland in 1790 and James came of age in Boston, in the bustling bourgeois culture of Victorian dinner parties and intellectual salons. He was well suited to it: brilliant and gregarious, James was no recluse.

“What may be called ‘club opinion’ is one of the strongest forces of life,” James observed. He participated in this force, but he also maintained that it was vitally important to escape it at certain moments. You see, I think the Irish goodbye is suited not to those who never congregate, but those who almost always do. In the 1890s, James helped found pragmatism, a philosophy of free will, action, individuality and authenticity. It was and remains a way of thinking that almost necessitates one’s abrupt exeunt from the crowd.

After James’s death in 1910, his son observed of his father that, “nothing galled him like having to be sociable”. James flourished in his intellectual and cosmopolitan life. But it was also, for him, an unsettling one – busy, public and often tedious. “He allowed his conscience,” his son explained, “to be constantly burdened with a sense of obligation to all sorts of people.”

Teaching at Harvard in the late 19th century, James was exposed to outmoded social conventions, which he came to loathe, and would escape them at the first opportunity. When he and his wife Alice threw the occasional cocktail party at their home in Cambridge, James would disappear after dinner, only to be found in the study, reading by himself or smoking a pipe.

Ghosting can take many forms – vacating a party at your own house or never opening Facebook again – but many of them are therapeutic.

So was James being impolite? Probably – but his friends (and there were many of them) didn’t seem to mind. Perhaps this is due to James’s almost brutal honesty regarding his personal needs and psychological state. His friends basically expected him to leave unexpectedly. And that was enough, an almost endearing attribute of a free thinker.

In the last decade of his life, James admitted that, “[I am] just filled to satiety with the simpering conventions and vacuous excitements of so-called civilization; hungering for their opposite, the divine outlook from the cliff or hill-top over the unbroken forest.”

Like the ancient Cynics, James believed that civilized life and its incessant politeness was largely a waste of time. He was cooped up in his lab, immersed in his work, for so many years, that he always craved a bit of free time. For James, this came in the form of getting back to nature, abandoning the salons of Cambridge and making for the Adirondack mountains in New Hampshire.

As he wrote to Shadworth Hodgeson, “I need to lead a purely animal life for at least two months to carry me through...the..year.” There was, however, something wild about the simple act of abandoning a party, even one that he had thrown. It is the act, albeit modest, of going one’s own way.

“Simpering” and “vacuous” – this is how James described the parties he was subjected to. How many conversations, text chains, Twitter posts, Instagram tags, could be described this way? Some, many, most, nearly all? It is always possible to retreat to some version of James’s “unbroken forest.” The problem with small talk, according to James, is not only its emptiness and lack of vibrancy but also the way that it drowns out our inner voice, the check on becoming something we would rather not.

In a note to his wife, James explains his willingness to go against the grain of social convention, and more specifically to head for the hills without a second thought. In the end, it was a matter of self-preservation: “Now as well as I can describe this … real me … this characteristic attitude in me always involves me…holding my own.”

There is always a difficulty in holding one’s own in the company of others, who inevitably ask us to give up something of ourselves. You might think of the words of the French existentialist Jean Paul Sartre (who read James religiously in the middle years of the 20th century) that “hell is other people”.

But I think a Jamesian might be a bit less melodramatic: go to the party, have fun, but leave when you feel yourself slipping away. And don’t feel bad about it – ever – and don’t waste a moment.

John Kaag is professor of philosophy at the University of Massachusetts, Lowell. His latest book, Sick Souls, Healthy Minds: How William James Can Save Your Life, is published by Princeton University Press.

The movie quiz: ‘Jaws’ appeared in how many James Bond films?
Real news has value SUBSCRIBE