Brief reviews of A History of Ireland in International Relations by Owen McGee, Dead Famous by Greg Jenner, Believe Me by Jessica Valenti & Jaclyn Friedman, The Fabulists by Michael Peel, Love and Other Thought Experiments by Sophie Ward 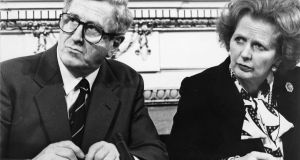 A History of Ireland in International Relations
by Owen McGee
Irish Academic Press, €24.95
This book takes up Garret Fitzgerald’s challenge “for the international economic context behind Irish political history to be fully integrated into the narrative of both the Irish State and its international relations”. Beginning with a survey chapter tracing Ireland’s place in the world from earliest times to 1919, it then follows a chronological approach as its surveys the independence struggle, Free State diplomacy, our evolving relationship with the British Commonwealth, our participation in the UN and the EEC/EU, as well as “crisis diplomacy” during the Troubles. Asserting the rights of small nations, campaigning for international disarmament and human rights, contributing significantly to UN peacekeeping and enthusiasm for overseas development aid are some of the salient and consistent characteristics put forward in this valuable addition to Irish historiography. – Brian Maye

Dead Famous
by Greg Jenner
W&N, £18.99
Greg Jenner is a historian and broadcaster as well as an author and upon finishing his latest title, no reader should be surprised to learn that he is a consultant on the BBC Horrible Histories TV series. This history of celebrity begins in the 1700s and continues at a breakneck pace into the 1950s. Jenner maintains a wonderfully acerbic, even mockingly urbane tone throughout, always pushing against the contemporary perception of what being famous really meant while sprinkling historical facts about these figures around like confetti. As a tour guide through centuries of celebrity culture, Jenner acts as a kind of Oscar Wilde figure, dispensing wisdom and wit in equal measure, producing a fiendishly enjoyable and thoroughly engaging look at other people’s lives. – Becky Long

Believe Me: How Trusting Women Can Change the World
by Jessica Valenti & Jaclyn Friedman
Seal Press
Phew! I need a moment to digest this. In Jessica Valenti and Jaclyn Freidman’s latest essay collection, an assembly of powerhouses have been brought together to answer the question “what would happen if we believed women?”. Contributors fluently attest to how our world could change if we trusted survivors of rape and sexual harassment; if we took women’s pain seriously and accepted gender identities. And what if we went further and matched this belief with justice and a rebalance of power. These are intelligent, courageous voices addressing issues of contemporary feminism. Think less of a choir obediently following the same hymn sheet, and more of an ensemble of individual voices who have come to sing together in unity. – Brigid O’Dea

The Fabulists: The World’s New Rulers, Their Myths and the Struggle Against Them
by Michael Peel
Oneworld, £18.99
Here is excellent investigative journalism exposing global corruption. It’s a devastating picture – from Duterte’s death squads in the Philippines to dark realities behind the surface social progressiveness in Saudi Arabia; from Brexit to the fall from grace of Aung San Suu Kyi in Myanmar. Most countries are complicit: “The dishonesty and double standards of democratic countries have powered the rise of autocratic myth makers.” Despair comes with fake news and populism. Hope comes with brave people fighting corruption in all countries, including Romania, Slovakia and Bulgaria. They prove that there is a truth worth fighting for. As murdered Maltese journalist, Daphne Caruna Galizia, wrote: “There are crooks everywhere you look now...The situation is desperate.” An up-to-the minute X-ray of a sick world. – Kevin Gildea

Love and Other Thought Experiments
by Sophie Ward
Corsair, £14.99
Actor Sophie Ward has been a presence on stage and screen since the 1970s. Her literary debut is a conceptual novel that unfolds through a sequence of interlinked stories, each unpacking a different famous (or infamous) thought experiment. Ward’s project holds the potential for coldness but her prose is far from clinical and her characters are believable, relatable and anything but predictable. At the heart of the novel is the relationship between Rachel and Eliza and their decision to have a child together. Ward weaves observations on the nature of reality and the subjectivity of perception into a genuinely affective family narrative that is emotionally compelling as well as intellectually stimulating. Surely not since Jostein Gaarder’s 1991 novel Sophie’s World, has an author produced such an imaginative and original synthesis of fiction and philosophy. – Becky Long