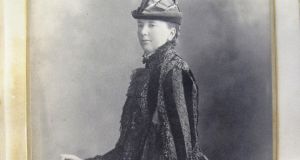 Irish novelist and naturalist Emily Lawless (image courtesy of Marsh’s Library). Her 1892 novel Grania contained detailed descriptions of the natural world, shaped by her own scientific inquiries, which were praised by Darwin.

In most of the world, expertise is making a comeback. We are placing our faith in healthcare professionals such as Dr Tony Holohan and Prof Philip Nolan to lead us through the current pandemic. In the US, where the ascent of experts is on shakier ground, Dr Anthony Fauci is the target of both immoderate adulation and inexplicable death threats.

As the period of isolation begins to wind down across Europe, however, some countries are looking beyond doctors and scientists to other forms of expertise. In Germany, for instance, philosophers, historians and theologians are being pressed into service to help map out the origins and future course of the crisis.

In Ireland, Prof Daniel Carey of NUI Galway has called for a significant investment across the fields of the humanities and the social sciences in order to address the effects of a crisis that threatens not only our physical health but also our social, political and economic wellbeing.

Part of the challenge we face is learning to ask the right questions, which, when answered, will help prevent another pandemic. We don’t just need a vaccine for the disease. We need an interdisciplinary approach to diagnosing and treating the conditions that enabled it to proliferate in the first place.

Such a holistic approach will mean broadening our understanding of the kinds of expertise needed at a moment like this. Pathogens and people together make a pandemic, and we cannot eradicate the pathogen without understanding, respecting and working with people. Doing so takes the co-ordinated efforts of historians, anthropologists, artists, sociolinguists and writers, all of whom are experts in narrative and representation – in short, scholars and practitioners of the humanities.

In our present crisis, however, it can seem like the sciences are tasked with finding a cure while the arts and humanities provide consolation and entertainment. It is true that many of us are turning now to literature and the arts for “a portal to the most profound human connection’”, but the humanities offer even more when understood as a set of approaches that enrich scientific inquiry as well.

This crisis should, for instance, bring increased attention to the field known as the medical humanities. Ida Milne’s recent book on the Spanish flu in Ireland has unexpectedly and tragically become a handbook for our times, offering insights into the demographics and progression of the disease, as well as the impact of political decisions on the pandemic. The Spanish flu made its way into the literature written in its wake – including WB Yeats’s The Second Coming – and we can anticipate that much of our understanding of the human experience of Covid-19 will be revealed to us through the world of the arts in the coming months and years.

As we explore in a collection of essays we have recently edited, this cross-fertilisation of the sciences and the humanities is far from new in Ireland. In fact, the period that produced some of Ireland’s most famous and most experimental writers was also, and not coincidentally, a time of the greatest cross-disciplinary flowering of innovative ways to understand our physical world and our place in it.

What made the practitioners of “modernism” in Irish literature so famous (think Yeats, James Joyce, Elizabeth Bowen, Samuel Beckett) was their active participation in a broad range of ways of thinking about what makes our world modern. The history of these imaginative collaborations to find complex answers (and questions) for a complex world is one that we would do well to remember today.

Among the well-known Irish writers at the turn of the last century were established scientists such as novelist Emily Lawless. Her novel Grania (1892) was a model of precise, detailed descriptions of the natural world, shaped by her own scientific inquiries, which were praised by Darwin. Meanwhile, the naturalist Maude Delap was busy crossing and recrossing the boundaries of natural history, life-writing, and ethnography.

Medical doctors too were part of the revolution in Irish writing and ideas, with Oliver St John Gogarty perhaps equally famous for his wit and his poetry as he was for his skill as an otorhinolaryngologist. While St John Gogarty was a household name in his time, many of us now know him better from his appearance as Buck Mulligan, the medical student in James Joyce’s Ulysses.

With its painstaking attention to the rhythms of the heart, Ulysses is a psychosomatic treatise as much as it is an extended diagnosis of Irish life and culture

Joyce himself was a sometime student of medicine, and his lost first play featured a doctor living and working through an outbreak of the plague. This alternative career path is written all over Ulysses. As critic Enda Duffy has argued, Joyce was inspired by world-famous 19th-century Irish cardiologists in his clinical rather than metaphorical treatment of the heart. With its painstaking attention to the rhythms of the heart, Ulysses is a psychosomatic treatise as much as it is an extended diagnosis of Irish life and culture.

The extraordinary cross-fertilisations of literature and science at the time were not just the domain of those with specialist scientific training. Indeed, some of the greatest insights into the contemporary world of science came from those who kept their distance from it.

Samuel Beckett, for example, had no formal scientific training, but he was obsessed with conditions of the mind and body, and read widely in scientific scholarship. His reading shaped the endless parade of diseased, afflicted, and impotent characters in his work. But as Chris Ackerley writes, Beckett also cast a critical eye on popular advances in biological sciences.

Beckett was writing when the pseudoscience of eugenics, a key inspiration for the racial theories of Hitler, was on the rise, and Beckett’s skeptical glance at the science of the body sounded a note of warning. His was an early voice in the field of what we know today as bioethics; his work drew on scientific innovations, but he was also willing to resist and even oppose those innovations when they lost sight of our common humanity.

It is not the case, as we might suspect, that the arts simply “represent” or “communicate” scientific knowledge. Though it is true that many modernist writers were enamoured of engines or entranced by quantum mechanics, a closer look reveals there has long been two-way traffic (as Gillian Beer puts it in her study of Darwin) between science and the creative arts.

We can find a concrete example of this in the work of Erwin Schrödinger, director of the Dublin Institute for Advanced Study in the 1940s. A believer in the inextricability of science, philosophy and literature, Schrödinger admitted in his 1944 book What Is Life? that the mysteries of how life is made and sustained eluded the explanatory powers of the science of physics.

Flann O’Brien (Brian O’Nolan/Myles na gCopaleen), an avid reader of popular science, wrote in one of his Cruiskeen Lawn columns in The Irish Times that Schrödinger’s admission was a clear acknowledgment of his and others’ indebtedness to the imaginative work of writers and artists for his comprehension of the “life-cell”.

Many of Schrödinger’s contemporaries in the scientific disciplines saw themselves as taking part in the discovery and invention of a more complex world, right alongside Pablo Picasso and Mainie Jellett, Yeats and Joyce. As literary critic Mark Morrison has argued, the early years of the 20th century saw not only an artistic and literary modernism but also a “scientific and technological modernism”.

Einstein, Heisenberg and Hubble understood their work as being driven by imagination, artistic experimentation and the avant-garde, not separate from them. But this history of the disciplines working together to forge a new and a better world has been obscured in the intervening decades.

Right now is the moment for us to take a page from this forgotten history. What a thorough historical and critical examination of modernist literature tells us is that science, technology and the arts and humanities are richer together: not simply parallel, but intertwined. And what is needed now is a recognition that our field of knowledge about the pandemic is shaped by science, certainly, but also by stories, by assumptions, by politics, by history, by rhetoric – by the very things that humanists study. If these go unexamined, our solutions to the crisis will only go so far.

In responding to the Covid-19 crisis, Ireland has an opportunity to learn from its pioneering past and to understand again the vital place of the arts and humanities in discovering how humans fall ill and how they heal.

Kathryn Conrad (University of Kansas), Cóilín Parsons (Georgetown University), and Julie McCormick Weng (Texas State University) have recently edited Science, Technology, and Irish Modernism (Syracuse University Press, 2019), from which many of the ideas in this article are drawn.