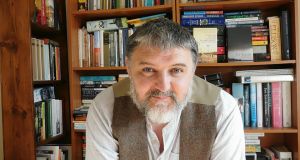 “Billy O’Callaghan’s style is rich and sonorous, and he surveys his characters’ ageing bodies and dwindling horizons with a dauntless eye, yet with such compassion that the final effect is to enhance their dignity.”

My Coney Island Baby by Billy O’Callaghan and For the Good Times by David Keenan have been shortlisted for the 2020 Encore Award, which was set up in 1990 to celebrate the achievement of outstanding second novels. Sally Rooney won last year for Normal People.

Also shortlisted are Patrick McGuinness for Throw Me to the Wolves; Shiromi Pinto for Plastic Emotions; and Luiza Sauma for Everything You Ever Wanted . The winner will be announced on June 25th.

Judge Eley Williams said: “For the Good Times collars the reader and takes them on a headlong, giddy dash. This is the past written as spirited and brutal conjuration: incendiary, intimate, absurdist and disquieting story-telling by a master of his craft.”

Fellow judge Edmund Gordon said: “A wise, tender, and exquisitely tuned novel about the end of a love affair in middle age. O’Callaghan’s style is rich and sonorous, and he surveys his characters’ ageing bodies and dwindling horizons with a dauntless eye, yet with such compassion that the final effect is to enhance their dignity.”

Saturday’s books pages
Freya McClements talks to Dara McAnulty about his debut work, Diary of a Young Naturalist, and Joe Humphreys interviews Dutch historian Rutger Bregman. Reviews include Breandán Mac Suibhne on Ireland’s Empire by Colin Barr; Andrew Hadfield on Radical Wordsworth: The Poet Who Changed the World by Jonathan Bate; Mia Levitin on Resistance: A Songwriter’s Story of Hope, Change, and Courage by Tori Amos; Anna Carey on The Oppermanns by Leon Feuchtwanger; Niamh Donnelly on The King of Warsaw by Szczepan Twardoch, translated by Sean Gasper Bye; Oliver Farry on Dying for an iPhone by Jenny Chan, Mark Selden and Pun Ngai; and Sarah Gilmartin on Latitudes of Longing by Shubhangi Swarup.

Orwell Prizes shortlists
Girl by Edna O’Brien has been shortlisted for the Orwell Prize for Political Fiction, won lasdst year by Anna Burns for Milkman. Also shorltisted are Booker winner Berrnardine Evaristo for Girl, Woman, Other ; Goldsmiths Prize winner Lucy Ellmann for Ducks, Newburyport; Pulitzer-winning The Nickel Boys by Colson Whitehead; The Wall by John Lanchester and Heaven, My Home by Attica Locke.

The shortlist for the Political Writing prize, won last year by Patrick Radden Keefe for Say Nothing, features Royal Society Science Book Prize winner Caroline Criado Perez’s Invisible Women: Exposing Data Bias in a World Designed for Men; Underland: A Deep Time Journey by Robert Macfarlane ; The Age of Surveillance Capitalism by Shoshana Zuboff; Appeasing Hitler: Chamberlain, Churchill and the Road to War by Tim Bouverie; Some Kids I Taught and What They Taught Me by Kate Clanchy; The Windrush Betrayal: Exposing the Hostile Environment by Amelia Gentleman; and Margaret Thatcher —Herself Alone: The Authorized Biography Vol 3 by Charles Moore.

The winners of both prizes, each worth £3,000, will be revealed on George Orwell’s birthday, June 25th.

Edna on Joyce
James and Nora: Portrait of Joyce’s Marriage: A reading by Edna O’Brien will be broadcast on RTÉ Radio 1, on Saturday, June 13th, at 6.30pm. The book of the same name will be published by Weidenfeld & Nicolson on June 11th.

Hubert Butler Essay Prize
The 2020 prize-giving of the renowned international Hubert Butler Essay Prize, which encourages the art of essay-writing across Europe, is to be held on October 23rd, to be presented by President Michael D Higgins at a ceremony hosted by Kilkenny Arts Festival, to mark the 120th anniversary of Butler’s birth in Kilkenny. The annual prize is organised by HEART London, an arts charity which promotes the best of the European liberal values that Butler embodied.

Submissions are now open and the title for this year’s essay is “Communal solidarity and individual freedom: antagonists or allies?”. The application form can be found at hubertbutleressayprize.com and the closing date for submissions is September 4th.

Judged by Catriona Crowe, Roy Foster (chair), Nicholas Grene, Eva Hoffman and Barbara Schwepcke, the first prize will be £1,000 with two second prizes of £500 each; in addition the winners will be published in the series Haus Curiosities.

This literary prize is designed to reflect Hubert Butler’s interest in the common ground between the European nation states that emerged after the first World War; his concern with the position of religious and ethnic minorities; his life and writings as an encapsulation of the mantra “Think globally, act locally”; the importance of the individual conscience; and his work with refugees.

John Banville, honorary patron of the award said, “The Hubert Butler Essay Prize is a splendid thing, both a tribute to one of the very greatest exponents of the form, and a venture aimed at ensuring the continued health and vivacity of the form itself. Montaigne would approve, and so would Orwell. Write on!”

Butler’s daughter Julia Crampton said, “My father lived his whole life in Co Kilkenny and was deeply involved in many local projects there including the Arts Festival. That the celebration and prize giving will be in Kilkenny this year, with the support of Kilkenny Arts Festival, is a wonderful way to remember Hubert Butler who got little recognition during his lifetime. Perhaps this year’s essays will give us some ideas of what Hubert might have thought of the world today in all its extreme chaos.”

Washington began writing Lot in 2016 with an ambition to chart the city of Houston’s geography, focussing in on the interior lives of his marginalised fellow citizens. From a young woman’s affair detonating across an apartment complex to the aftermath of Hurricane Harvey, Lot presents a formidable yet tender collection of interlinked tales of uncertain existence and a stunning insight into what makes a community, a family, and a life.

Prof Dai Smith said: “Bryan Washington’s collection of short stories, LOT, does what all great fiction does, finds a style that can open up a world that is otherwise unknowable and he does it with wit and grace. It is a real voice, unique, unforgettable, generous, and warm and one which provides us with a sense of community and the full experience of life. As one of the judges said he has a country and western kickass voice.”