Why we need to eat, sleep and live like cavemen

Eat like a hunter-gatherer, be an active commuter and connect with nature 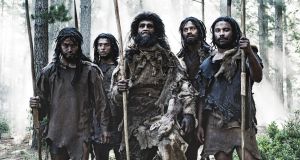 Anatomically, we remain broadly “palaeolithic”, much as we were before towns or large-scale farming developed about 5,000-10,000 years ago. Photograph: Coco Van Oppens / BBC

Modernity marches on: for the first time in human history, more of us live in towns than in rural communities. Indeed, by 2050 the global population will have risen to 9.6 billion and even more cities will be built to accommodate those people. But are we building the right types of town?

Although there are major benefits in city life, there are also major costs. These include the seemingly unstoppable rise in obesity, coronary-related problems, Type 2 diabetes, Alzheimer’s and various types of cancer, all listed by the World Health Organisation in the 10 most common causes of death in modern, urbanised societies.

Some say these deaths are an inevitable result of old age, but those fatal conditions are rare or non-existent in un-urbanised communities that still maintain an “ancestral” lifestyle, such as in Kitava, Papua New Guinea. Arguably, aspects of modern urban living are to blame for the epidemic of “western lifestyle diseases”.

The problem is this: humans gradually evolved over 6 million years as “hunter-gatherers”, living off the land in tribal societies. They developed symbiotic relationships with nature, breathed fresh air, drank fresh water and ate fresh foods. That’s what we were – and still are – designed for. Anatomically, we remain broadly “palaeolithic”, much as we were before towns or large-scale farming developed about 5,000-10,000 years ago.

Culturally, however, society changed at a remarkable speed. There’s now a mismatch between modern urban living and that ancient unchanged part of our DNA supporting “hunter-gatherer” lifestyles. And skeletal studies of ancient cemeteries graphically show how the transformation from ancestral practices to farming and urbanisation damaged our collective wellbeing. We need to return to our roots: we’re not born to live in towns. And towns are killing us.

A possible solution is suggested by research developed at University College London. For starters, can we, in the 21st century, eat like hunter-gatherers? Archaeologists and anthropologists have already collected hard data on the best evolutionary-concordant diets.

We know what really worked for us during our long evolution, and thus what our unchanged metabolism and digestion still need today. It’s clear there’s no one-size-fits-all-wonder diet. Humans were and are adaptable creatures, living in contrasting environments and latitudes in the Arctic, Australia, Africa and the Amazon. Studies show that some tribes depended more on fish than plants or meat; others more on plants than meat or fish; some more on meat than fish or plants. But none consumed the prodigious quantities of sugar-based or industrialised products we enjoy today.

For modern lives, there are problems with staples like breads, and not just for those with a gluten intolerance. Eating too much simply displaces other foodstuffs from your table, limiting the range of macro and micro nutrients you really do need to be consuming. Ancestral diets included a wide variety of fruits, vegetables, berries, nuts, roots, seeds, fish, shellfish, grubs, insects, eggs and meat, innards as well as muscle. The only basic rule is to collect a wide variety of fresh foods, in season, daily. Regrettably for some, there’s little mention of beer, bread or biscuits in tried and tested evolutionary concordant diets.

The human race is genetically adapted for a life of regular activity rather than long sedentary periods: walking, lifting, bending, climbing and carrying, be it wood, water, food or children. A typical distance covered might be up to 10 miles per day. The necessary daily activities would require an average energy expenditure of between 3,000 and 5,000 kJ, perhaps five times greater than many modern sedentary adults. Consequently, hunter-gatherers were usually lean and rarely obese, which reduced trauma to joints and minimised diet-induced inflammation. In addition, these vigorous activities were conducted primarily in the open air, thus maintaining vitamin D levels. This vitamin is another evolutionary determinant of our health, since it enhances our ability to absorb calcium, iron, magnesium, phosphate and zinc. Unfortunately, few foods contain vitamin D, and thus direct exposure to sunlight is the normal way to obtain this crucial benefit.

Today, we need to simulate such energy-consuming regimes if we are to avoid becoming overweight or worse. A physiology designed for an active life needs to undertake such tasks regularly, or conditions such as osteoporosis might ensue. Active commuting (ie walking or cycling at least part of the route to work) would make a good start as do sports, dancing and gardening, to name but a few activities that we need to indulge in regularly for the sake of our physical and our mental health.

Active days still need sleep to allow the body to repair and rebuild itself, while the brain needs downtime to process the information absorbed during the day. In antiquity, this was all part of the natural cycle, the circadian rhythm of night and day, before such differences were dissolved by electric light and the demands of 24/7 cities. Sleep is clearly important to our ancient bodies, as sleep deprivation studies prove. Its loss leads to incipient depression as well as the craving of dense carbohydrates, and thus weight gain. Individuals with a good night’s sleep will ultimately overtake over-caffeinated over-achievers operating ineffectively on four hours’ sleep a night.

Our ancestors lived their lives with the unpredictabilities, for good or ill, of weather, predators and the seasons. That crucial connection with nature with its flora and fauna is still with us, but is much constrained by modernity. Nevertheless, we know that those living closest to greenspace in modern conurbations enjoy better physical as well as mental health. So why should this be?

Microbiological research suggests that it’s all about effective immune systems, working through the actions of macro-organisms, microorganisms and microbiota that live on our skin and in the gut. Without these tiny organisms, our susceptibility to allergies, autoimmunity and inflammatory bowel disease increases. The problem is that we are not born with these microbiota: they are derived from the mother’s birth canal and subsequently from soil, plants, animals, the air or from contact with other humans. This highly effective personalised ecosystem co-evolved with us during the many millennia we lived as hunter-gatherers.

Living in towns, however, limits our exposure to microbiota in the natural environment while also increasing our susceptibility to crowd infections. A reduced engagement with nature in cities is therefore damaging for our physical health. We still need the micro-organism that only animals, pets, plants, trees and soil can give us: towns therefore need parks, greened streets, allotments and football pitches if we are to build and maintain effective immune systems.

We can’t un-invent urbanisation, but we can reconfigure our city lives, our building designs and even our town plans on evolutionary-concordant lines that better fit our biology. By respecting our inner hunter-gatherer, we can much improve our urban wellbeing.
Gustav Milne is an archaeologist and academic specialising in urban archaeology and author of Uncivilised Genes - Human Evolution and the Urban Paradox