Tom Murphy: a life in the theatre

As Trinity College Dublin’s library launches a digital exhibition ‘Tom Murphy: A Life in the Theatre’, its co-curator Liam Harrison explores his life and work 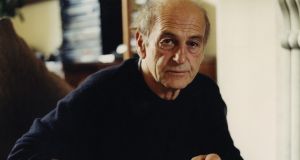 Tom Murphy in 2001: “the most restless imagination in Irish theatre”. Photograph: Paul McCarthy

“No characters such as these exist.” Such was the response of the Abbey Theatre director Ernest Blythe in 1959, upon reading the manuscript of Tom Murphy’s The Iron Men, later renamed A Whistle in the Dark. Blythe did not stop at writing a mere rejection slip. He let loose on Murphy, damning the play for being “unreal” and contesting that no such people as those portrayed could be found in Ireland.

Blythe bluntly denied that the play might be any kind of nicely polished looking-glass for Irish self-reflection. Nor did he consider that it might express the “transience that is at the heart of the emigrant experience”, as Michael D Higgins recently put it, when conferring Murphy with the Aosdána Torc, Ireland’s highest arts honour.

After his rejection Murphy swapped Tuam for London. Like many other great Irish artists of the 20th century he had to take his work abroad to find success. A Whistle in the Dark eventually premiered in the Theatre Royal Stratford East in 1961 and was greeted with both plaudits and horror.

A Whistle is a brutal tale of violence begetting violence. The protagonist Michael attempts to start a new life in Coventry, but is followed by his brothers and father who drag him down into the bloodshed he has tried to escape. Michael is caught between two suffocating worlds, between vicious tribalism and alleged modernity. This sense of two or more worlds colliding, of simultaneous histories clashing, is a feature in all of Murphy’s works.

Harold Pinter’s menacing play The Homecoming is often compared to A Whistle. However, Murphy’s play is more confrontational and visceral, as the playwright himself puts it: “I wanted violence on the stage, immediate, direct, as against the Pinter sort of bollocks writing – ‘Pass the salt dahling’, which means: ‘I hate your guts, I want to kill you’.”

This directness was remarked upon widely by the English press reviews, with no shortage of racial stereotypes about the “wild Irish”. Milton Shulman wrote in the Evening Standard, “The only thing that separates his characters from a bunch of wild gorillas is their ability to speak with an Irish accent”. Kenneth Tynan in the Observer called the play, “the most uninhibited display of brutality that the London theatre has ever witnessed”.

Murphy’s plays often contain a family ripping itself apart at the seams. Fintan O’Toole, an early advocate of Murphy’s theatre, claims these broken families serve to dramatise “the breach of order in the world”. But these breaches of family and order are not always as brutally violent as A Whistle.

Murphy’s A Crucial Week in the Life of a Grocer’s Assistant (1969) details the stunted life of a young man in a small Irish village. He is unable to stay at home yet incapable of leaving, caught in the nets of family and religion. The play was seen by chance by several members from the International Commission on the Use of English in the Liturgy in 1970. The group were in Dublin discussing the revision of the Latin Mass, and its conduct in the vernacular. The members were so impressed with the play that one of them invited Murphy to contribute to their project.

Murphy, whilst stressing that he was no longer Catholic and that he “would not wish his Catholic background on anyone”, tentatively accepted. He attended meetings in Rome, Washington and Toronto, making suggestions which helped shape the prayers of millions of Catholics. The unlikely experience led to Murphy’s most controversial play, The Sanctuary Lamp (1975), where the sacraments of the church are merged with the vaudeville of the circus.

In The Sanctuary Lamp, and across his work, Murphy does not use religious language and imagery at surface value. Instead he subverts it, extracting both the pain and the hope from religion and dramatizing it in an expressive form or action – a strongman miraculously lifting a church altar, a quack psychologist singing opera. These actions maintain something of the numinous quality of religion, whilst moving away from the dogma which Murphy found so unfulfilling.

In 1972 Murphy joined the board of the Abbey Theatre which he served on for 11 years – putting the Blythe episode well and truly behind him – and the theatre has since featured almost every Murphy play. Murphy has also had a highly successful partnership with Druid Theatre and the director Garry Hynes, which began and blossomed in the 1980s. It was the decade he wrote two masterpieces, The Gigli Concert (Abbey 1983) and Bailegangaire (Druid 1985).

In The Gigli Concert a property-developing, nameless Irish Man approaches a “Dynamatologist” (Murphy’s own concoction, think mindfulness meets psychoanalysis) with his ridiculous, Faustian wish to sing like the legendary Italian tenor Beniamino Gigli. In what is debatably his greatest work, the sublime is brought crashing against everyday reality, reflected in the play’s common refrain, “How am I going to get through today?”.

The Gigli Concert suggests that music might transform the mundane aspects of everyday life. It is this transformative quality which gives music its central place in Murphy’s plays, and he often repeats Walter Pater’s idea that “all art aspires to the condition of music”. Murphy manages to craft a symphony out of fragmented conversations. His plays are full of characters talking incessantly but unable to express what they mean, as in the pub drama Conversations on a Homecoming (1985). But this fraught, broken dialogue creates a musical rhythm which, in his own words, allows “the inarticulate to sing with feeling”.

Almost as important as music in Murphy’s work is his sense of place. Plays like Famine (1968) and Bailegangaire explore a localised Irish poverty, both physical and imaginative – from the infants buried in the night with no names to the toxic claims of family and property. However, these plays cannot be reduced to a single place, as they address multiple histories at once. Through this multiplicity they perform a longing and lostness which strives beyond local tragedies.

Murphy’s artistic response to this state of lostness cannot be found in ideologies or aesthetic manifestos, which he has always shunned. He has a paradoxical imaginative process, and would often completely switch style and genre after finishing one project and moving on to another. As such, his career does not line up in an easy trajectory of realism leading to experimentalism. Murphy’s style of work, rather, has always been improvisational, writing in whatever form the characters and voices demand. This has led to many impracticalities in the theatre, as in A Thief of a Christmas (1985) which required 50 people on stage at once, with the original cast including a young Anne Enright squashed amidst the crowd on stage.

The Wake (1998) gives voice to an Irishwoman whose bodily independence and ability to grieve are taken away from her by the twisted parochialism of family politics. The crux of the play has its roots in Murphy’s only novel The Seduction of Morality (1994), which was then whittled down for the stage. The 2016 production of The Wake inadvertently but quite fittingly lent its name to the Waking the Feminists movement, as it had inspired the Abbey’s original title of its much criticised programme, Waking the Nation.

Whilst Murphy’s early plays On the Outside (co-written with Noel O’Donoghue in 1958) and A Whistle in the Dark focused on particularly masculine frustrations, many later plays – Bailegangaire, The Wake, The Alice Trilogy (2005) – have closely explored the marginalisation of women. Early drafts of Bailegangaire initially included a male character, but Murphy scrapped him in favour of keeping the cast an all-female one – still a rare spectacle on the Irish stage.

Brian Friel claimed Murphy has “the most restless imagination in Irish theatre”, and ultimately any attempt to box Murphy’s protean forms into a political or ideological corner is misconstrued. As Christopher Murray perfectly puts it: “Such playwrights as Tom Murphy are not interested in ideas or theses as primary at all; each is concerned to present the nature of experience as passionately and directly as a musician. If you say, ‘well, I don’t understand modern music either’, the reply must be: ‘you don’t have to’. You let it register firsthand, as sense experience. Forget about intellectualising it. It is what it is as it reaches you.”
Liam Harrison has co-curated the digital exhibition ‘Tom Murphy: A Life in the Theatre’, along with Emeritus Professor Nicholas Grene. The exhibition is hosted by the Library of Trinity College Dublin and can be accessed here