John Banville: Novels were never the same after Henry James

James invented the ‘psychological novel’ in The Portrait of a Lady. How could I not follow the fortunes of its heroine? 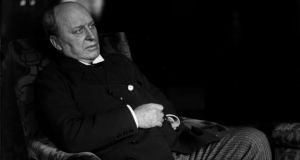 Although I often feel that I have been reading him since I was in the cradle, the somewhat embarrassing fact is that I came late to Henry James. It was in the mid-1970s that I first read The Portrait of a Lady, the great achievement of his middle years, if not the greatest of all his novels, as many readers consider it to be. I fell at once under the spell of the Master, and have knelt at his knee ever since.

That first encounter with The Portrait took place in Florence, where I was staying with my wife and son, in an eccentric little hotel run by two cadaverous but kindly and almost identical brothers, in the Via della Scala.

The hotel we were in stood only a few streets away from where, a hundred years previously, James had begun the composition of the novel, in a room overlooking the Arno, a river that is less river than slow-moving mudslide, thick as it is with alluvial marl the colour, and probably also the texture, of Colman’s Mustard.

Indeed I was also situated even closer, had I but known it, to the lodging house on Piazza di Santa Maria Novella, just at the end of the Via della Scala, where James was living at a later stage in the writing of The Portrait.

For me, therefore, the book is shot through with the tawny sunlight peculiar to the Tuscan capital, even though its opening chapters are set in rural England, and for almost the entire second part it is in Rome that Isabel Archer, the eponymous lady, lives and suffers.

I say I came late to James, but in fact I had read The Turn of the Screw in the early 1960s, after seeing The Innocents, Jack Clayton’s movie version of the novella, skilfully adapted – the odd couple of Truman Capote and John Mortimer shared the writing credits – and superbly shot, which is hardly surprising, since Clayton had made his reputation as a film cameraman.

I must admit that at the time I was not overly impressed by The Turn of the Screw. I thought it less well-crafted and not half as effective as the movie, or a fraction as frightening.

It amazes me now that the book, surely James’s finest short work, seemed to me then dry and rather precious, and the prose almost impenetrably dense. It was published in 1898, and marks, I believe, the transition between the more or less straightforward works of James’s middle years, including The Portrait of a Lady, and that trio of extraordinary and revolutionary late masterpieces, The Ambassadors – the author’s own favourite among his novels – The Wings of the Dove and The Golden Bowl.

Anyone who has read, or has attempted to read, late James will know that sense of being at once dazzled and dazed by the prose style he evolved in the first decades of the 20th century, a style designed to catch, with immense, with fiendish, subtlety, and in sentences of labyrinthine intricacy, the very texture of conscious life.

James Joyce was always ready to acknowledge that human beings do not really think in the form of stream of consciousness – a concept formulated by Henry’s brother William James, a philosopher and psychologist – that he employed to great and innovative effect in Ulysses.

Henry James’s modernist technique was very different to Joyce’s, but was, I believe, just as radical, in its way.

It would be foolish to claim that any person has ever gone through a single waking hour recording his or her thoughts and impressions in the kind of prose James employs in those tremendous and sometimes wearyingly opaque late novels.

All the same, the dauntless reader immersed in, say, The Golden Bowl, will be aware, at however obscure a level, of being caught up in an experience very like the experience of consciousness itself.

There will be the same sense of groping vagueness, of distracted wonderings, of guesses entertained and abandoned and then entertained again, the same suspicion of knowing something without knowing it, along with, now and then, sudden clearances, sudden dispersals of the fog, sudden steppings into the light of revelation and blissful certainty.

This, we realise, is exactly how it feels to be sentient and astray amid the bewildering complexity of quotidian reality.

“Art makes life,” James famously insisted, in a letter to that relentless paragon of common sense, HG Wells. The claim will seem excessive, until we realise that what the artist – and James was never less than an artist – meant was that art gives a shape to that incoherent process of stumbling-but-not-quite-falling that constitutes our state of being in the world. We do not remember our birth, we shall not know that we are dead; all we have is the mess in between these two extremes of eternal nonexistence.

On the contrary, even the most seemingly disruptive work of art is a completed, burnished thing, a golden bowl without, as in James’s novel, a tell-tale hair-line fracture, and yet, amazingly, at its best it looks and feels and sounds and tastes like life itself.

The secret is style

The secret of this glorious magical trick is style. “In literature,” James wrote, “we move through a blest world in which we know nothing except by style, but in which everything is saved by it.”

People in real life do not speak as James’s characters do – a thing for which we must be thankful – yet when we read a page of his dialogue we are persuaded that we are eavesdropping on living, breathing, feeling and, above all, thinking human beings.

James’s people would never for a moment consider leading an unconsidered life; they, like their creator, notice everything, register everything, even when they are at their most deluded. They are always conscious, and conscious of being conscious.

James transfigured the novel form, or at least offered it the possibility to be something entirely new. If I were asked to identify the place where he effected this change, I should point to chapter 27 of The Portrait – “obviously the best thing in the book,” in the author’s opinion – when one night Isabel Archer sits alone by the fireside in the palace in Rome where she lives with her husband, Gilbert Osmond, and contemplates the disaster that she, with the secret connivance of others, has made of her life.

Here, in this chapter, as it navigates the stream of Isabel’s consciousness, was the “psychological novel” born.

And here, too, was born the novel as an art form. Novels would continue, and do continue, to be written in the old ways: the novel of manners, the political novel, the comic novel, the adventure novel – James had the highest regard for Robert Louis Stevenson – the novel as simple entertainment, as pastime, as pure pleasure; but after The Portrait, the novel need never again be “mere” novel, a work about things, but rather could be, as Beckett said of Finnegans Wake, the thing itself.

How could I not have taken up the invitation held out by the Master, when he drew The Portrait to so oddly abrupt an ending? How could I not have followed the fortunes of Isabel Archer? She is one of literature’s great creations, one of art’s great consciousnesses, and, for all her flaws and failings, a true heroine.

“Chapeau!” the French say when they wish to acknowledge greatness; and in Mrs Osmond I, in vernacular Irish fashion, take my hat off to HJ.