In White Ink by Elske Rahill 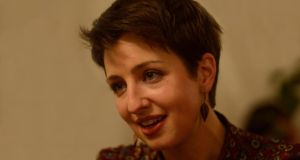 Readers familiar with Elske Rahill’s visceral debut novel Between Dog and Wolf will know that the Dublin author doesn’t shy away from the darker currents of relationships. Set on Trinity campus, her debut explored the sexuality and sexual politics of three very different students. Her first short-story collection, In White Ink, is similarly abrasive, though the humans – and some of the characters barely qualify as such – she presents are older, often jaded adults looking for meaning in life.

Rahill offers an interesting mix of mothers in her 11 stories, the most affecting of which is the first-person story of the titular In White Ink, whose title pays homage to the French feminist writer Hélène Cixous. A young mother gives a searing account of trying to keep her infant son safe from her vengeful ex-partner. A baby book works as a clever narrative device, offering tender snapshots from her son’s life. The details of the relationship are in stark contrast: “The tedium of slumber rape, the horror of daily sniping . . . his laugh a spray of bullets – huh huh, huh huh, huh – giving you suck, giving him head, cleaning the toilet.”

The intimacy of In White Ink is sandwiched between two stories that depict older mothers in crisis. In the opening story Toby, Valerie hates going to the hairdressers, “being helped into the black robe like an invalid”, but she has been expertly schooled by her own mother in the importance of appearances. Even in labour she kept up the façade, “biting down for the final push, determined not to scream, not to make a spectacle of herself”. Rahill’s compelling story charts a day when the façade finally falls.

With her school board position and shellacked nails, Kathleen in A Wife is similarly shiny on the outside. Her third-person narrative reads at times like caricature but is saved by small scenes of enlightenment – a stranger’s smile across a foyer, the silence in the car afterwards as Kathleen and her husband drive home.

Terraforming shows another mother, Caitriona, who signs up for a space mission because she wants to do something extraordinary with her life. The drudgery of the domestic is a recurring theme, recalling the English author Helen Simpson’s excellent collection Hey Yeah Right Get a Life. Rahill’s scope is much larger, however, sometimes to the collection’s detriment, offering multiple perspectives on the subjects of parenthood, marriage, love, violence and sex. In its focus on the deviant aspects of sexual relationships, there are also similarities with June Caldwell’s recent debut Room Little Darker.

In Bride, wife Anne is in denial about her husband’s paedophilia. Tragic consequences force her to admit she knew the truth: “They had honeymooned in Thailand. There were street children selling flowers. It wasn’t the way he looked at them. It was the way he didn’t look.”

In Manners, a lawyer hit by the recession has sold his Mercedes and gets the Luas to work where he admires the blooming sexuality of young Traveller women before taking a call from his daughter about her Leaving Cert results. Adrian mulls over the economy, mortgages, antique oak floors and that time he paid a woman to urinate on him. His weariness contrasts nicely with the excitable traveller girls in a complex picture of modern Dublin. He has higher hopes for his daughter, another recurring theme: “He wanted someone to fall in love with her for real, not as an aspiration.”

Other stories are more like interludes, a glimpse at two broken marriages in Playing House as Lily shares a takeaway with her landlord, or the young girl in Dolls who is sent to stay with relatives in France when her mother can’t take care of her. Rahill currently lives with her family in Burgundy and the story skilfully depicts the tensions within France’s multicultural society.

The least successful story in the collection is the fragmented narrative of Right to Reply, which sees multiple narrators tell the story of a Belgian couple who settled in Ireland after the second World War and set up a successful business, only to be hounded by the media decades later as alleged war criminals. It is noteworthy historical material but too many voices tell the tale.

Much stronger are the stories told by a single captivating voice. Pregnant teenager Donna in Cords is a sympathetic narrator as she mourns her grandfather and attends her suicidal brother in hospital. The closing story Tasteless is a poignant account of a bereaved father watching his daughter’s best friend get married. Instead of shifting narrators, Rahill stays with the emotional Eoin, making the glimpses of his sad, stoic wife at the table beside him all the more affecting. The majority of the stories in Rahill’s engaging collection have this impact. Bright bullets that ask readers to consider what matters in life.