Protestant and Irish: The Minority’s Search for Place in Independent Ireland 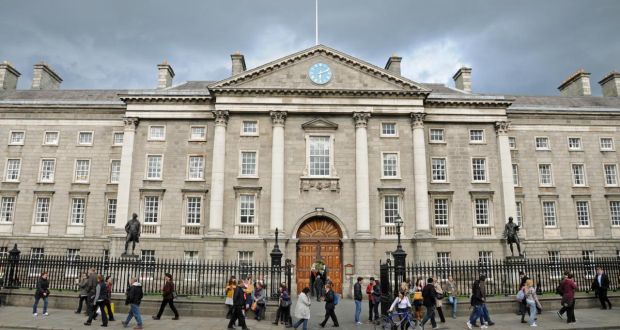 Trinity College Dublin: some decried how “the third university of the British Empire” was being reduced to “the university of an Irish Ireland”.

Book Title:
Protestant and Irish: The minority’s search for place in independent Ireland

“Those Protestants”, chuckles Father Ted about Rev Green in a game of Cluedo, “up to no good as usual”. Our island’s largest minority has often seemed mysterious to its Catholic neighbours – they like flutes, don’t like ABBA, and keep their toasters in cupboards declare the teenagers of Derry Girls – especially those from south of the Border, a community that has often “kept the head down” since independence. “How Irish Protestants see themselves and their place in their wider society is one of the remaining mysteries of Irish life,” remarks Joseph Ruane in this important new volume of essays that asks overdue questions, and offers some vital clues.

Despite the growth of a Catholic middle class in the late 19th century, British Ireland before the Great War was a country where the minority remained ascendant in power and wealth. Yet despite the strong unionist views of many Protestants – baptised, the Church of Ireland Gazette said in 1920, “not only into a religious faith but into a political camp” – the revolutionary period was not a sectarian struggle. Martin Maguire catalogues the long list of prominent republicans with Protestant backgrounds, from Constance Markievicz to Sam Maguire, Dr Kathleen Lynn to Seán O’Casey, and multiple essays argue that violence against Protestants was generally provoked not by an attempt at “ethnic cleansing” but by public hostility to republicanism and longstanding disputes over land. Independent Ireland, Roy Foster writes, would retain a “Protestant intonation, and was all the richer for it”.

Editors Ida Milne and Ian d’Alton emphasise that stereotypes of unionism and the “big house” obscure a diversity of Protestant experience. As Deirdre Nuttall writes of stories and memories being assembled by the National Folklore Collection, “shades of grey” have long been ignored, and there were many different reactions to independence. Some, d’Alton argues, lived in a sort of parallel “Protestant Free State” focused on the fact that in the “conservative, landed and devout” Ireland of the 1920s, “nothing much had changed”. In a fascinating essay on cartoons, Felix Larkin highlights a 1934 Dublin Opinion satire of a céilí at the Kildare Street Club, where the “old order” lives on beneath a Gaelic veneer: the announcements are in Irish, the statue of the king is covered over, but the dinner jackets and monocles remain.

The Free State, however, developed an increasingly Catholic character that was hard to ignore. In an exploration of the Irish Grants Commission (a British compensation scheme for victimised Irish loyalists), Brian Hughes notes that even if there was no Protestant “exodus”, communities from Cork to Cavan experienced an atmosphere of anxiety. “It is tragic,” WB Yeats told a Seanad debate on the banning of divorce in 1925, “that within three years of this country gaining its independence we should be discussing a measure which a minority of this nation” – that which had produced Swift, Emmet and Parnell – “considers to be grossly oppressive”.

Conor Morrissey highlights the career of peace campaigner and clergyman Bolton C Waller, who argued in 1930 that “all-embracing” Protestant nationalists like Thomas Davis would have “scorned and despised” the creation of a “Catholic Ireland” in which the minority were “ignored or merely tolerated”. A Protestant “intelligentsia” – Butler, MacNeice, Bowen, Russell, Shaw, and more – criticised the insularity, parochialism and censorship of that Ireland, but they are not the stars of a collection that sees a story of Protestant “unhappiness and alienation” as misleadingly simplistic.

Many Protestant families and communities “just got on with it”, often in surprising ways. Milne reveals the small but notable numbers of Protestants in the GAA. “Religion makes no difference,” a Church of Ireland hurler from Offaly recalled: “hurling is the religion around here”. Mass was omnipresent and aliases sometime necessary due to the ban on foreign games but a Leitrim footballer spoke for many ordinary Protestants when emphasising that there were no issues of national identity: “the Tricolour is my flag as well”.

The flag was more fraught at Trinity College, an institution many saw as the last bastion of Protestant unionist ascendancy. Tomás Irish explores how students and scholars tried to chart a precarious course “between the new state and the old union”. While some decried how (as one member of the College Historical Society put it) “the third university of the British Empire” was being reduced to “the university of an Irish Ireland”, others argued that the college had to “become Irish or go under”, to turn its minds and hearts (as Éamon de Valera told students in 1934) “in the direction of their own people”.

By the 1940s, Trinity had stopped flying the union jack and negotiated an annual grant from the State, and other ancient institutions too had to adjust. Miriam Moffitt reveals the controversy over the changes required in the Church of Ireland’s Book of Common Prayer after the Republic of Ireland Act came into force on Easter Monday 1949. With the president replacing the monarch in the “State prayers”, some congregations had tearful or defiant last renditions of God Save the King. The Kilmore, Elphin and Ardagh Diocesan Gazette was more stoic: “Protestantism is still Protestantism, and quite independent of Pharaoh whether he be Seán [John A Costello] or Seoirse [King George VI]”. Rev Ernest Daunt of Killiney noted that younger Protestants were unconcerned as they had all “gone green”.

Religious divides were slowly fading away. Catherine O’Connor’s study of inter-church marriage in Wexford shows that “emerging modernisation” in the 1950s and 1960s was eroding cultures of prejudice. Frank Barry shows that, into the 1950s, “most firms were known as either Protestant or Catholic”, with general awareness that the managers of Bank of Ireland, Guinness, Denny, Arnott’s, Jacob’s and other iconic names “dug with the other foot”. But the economic liberalisation of the 1960s (and the mergers and competition it brought) swept away the old ways of doing business. The remnants of Protestant privilege that remained were evidence of a “glass floor”, not the institutionalised sectarianism entrenched north of the Border. As independence neared its half-century, the editors write that even if the State remained “chilly” for some Protestants, “the temperature was improving”.

This thought-provoking collection will hopefully spark future research into Protestant stories during the decades of Troubles and transformation that followed, especially as the increasing diversity of our Republic today highlights the need for us to consider how minority experiences can be overlooked. As renewed debates on Irish unity emphasise our responsibility to engage with Protestants and unionists in Northern Ireland, these timely essays are a reminder that narrow narratives do no justice to our history.

Christopher Kissane is a historian and writer