Liam Kirwan’s ‘inside’ look is repetitive, hectoring and devoid of nuance or context 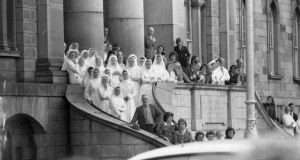 Nuns and staff at the Mater Hospital await the funeral cortege of president Éamon de Valera in 1975. Photograph: Independent News and Media/Getty Images

An Unholy Trinity is an almighty mess. Written by Liam Kirwan, a professor of surgery who worked for 35 years “in a large public hospital in the Irish health service” and is thus characterised as an “Irish medical insider”, its publication might be seen as timely given its preoccupation with the Mother and Child Scheme controversy of 1951 and the origins of the dysfunctional Irish health system at a time when debate rages once again about maternity care, religious influence and state responsibility. But Kirwan adopts such a bizarre and outlandish approach to his project that much of the book reads like a comic novel.

Certainly, there is a thesis here: that the seeds of the two-tier health system we have today were sown with the defeat of Noel Browne’s Mother and Child Scheme by the Catholic bishops, the Irish Medical Association and spineless politicians. But the thesis is flawed because that episode was not the sole cause of what exists today in Irish healthcare. The failure to create a national health service in Ireland over the past 60 years is so serious that it surely requires a serious approach to historically analysing the interaction of medicine, politics and religion and the triumph of vested interests. This book offers no such thing.

Kirwan’s account is drowned in verbiage; he has an addiction to sledgehammer analogies and a self-regard that punctuates the desperate prose as he adopts, ironically, a Voice of God narrative. It is repetitive, hectoring, devoid of any nuance or sufficient context, and is just far too flimsy and flippant to be taken seriously.

Kirwan, it appears, read a few archival letters from 1950 and 1951 and decided he could use them as the basis for an almost 300-page book, not by contextualising or building on those letters, but by giving a rambling, incoherent sermon that is so shallow he resorts to composing fictional letters in order to wish a personality change on the characters in this historical drama: “we might here indulge in the composition of an imaginary letter . . . all of this, of course, was unsaid”.

In any case, Kirwan traipses clumsily over well-trod ground in dwelling on the mid-20th century travails of minister for health Noel Browne as he sought to provide free medical care for all mothers and children, the determination of Catholic Church leaders to retain control over what they regarded as their domain, and doctors to protect their private income. Others have done it far better. The real pity is that Kirwan does not offer something new as a medic who insists his profession “has indulged in little critical self-analysis”. A book built around such analysis would be a welcome novelty.

Occasionally, he introduces important themes and perspectives: the fear of public maternity services when they were desperately needed; the contribution of religious orders to the development of hospital services and the manner in which some of those institutions became privatised; the poor standards in Irish medical schools in the 1940s; the imperiousness of mid- 20th-century Catholic bishops; and the dressing up of State funds as “Catholic church largesse”– but these are too often mere sideline comments. His main preference is to indulge in caricature and offer unnecessary chunks of the blindingly obvious: “Great upheavals in the affairs of the world have an unhappy way of upsetting comfortable equilibrium”; or “most of the clergy of that day have been swept away by time”; or “of money in Ireland in 1950 there was very little”.

He also simplifies the politics of healthcare during the 1940s and 1950s, arguing that only the British and American models were relevant. He suggests, “Ideological lines in Ireland were clearly drawn between those supporting two extremely diverse systems of healthcare provision; state intervention or laissez faire”. Ever helpful, he tells us “the respective ideologies are those of Robin Hood and Scrooge”, but it was not that clear-cut.

It is true that “the medical establishment had little difficulty in sowing alarm in the minds of their Lordships” about greater state intervention in the provision of health services, but this is not explained or teased out in any depth. Instead, we are presented with Browne and the Catholic Archbishop of Dublin, John Charles McQuaid, as “the two great protagonists”, and so commences the cartoon history.

According to Kirwan, Browne’s “credibility, integrity and reputation have been fortified with every passing year”. They have not: in 2000, former minister for health Barry Desmond depicted Browne as an embittered man with a persecution complex who was “quite incapable of consistent loyalty to the democratically elected executive of any of the parties he joined, and one who “craved political love and acclaim”. While acknowledging his political naivety, Kirwan insists Browne was “a man of great procedural correctness”, though his colleagues found he was often the opposite.

McQuaid was from “an obscure place made famous by Percy French” (Cootehill), and was a “high profile and vociferous Martinet whose conservatism was beyond any scale of measurement”. It was not: it can be measured according to the ethos and power alliances of that era, a time when, as Kirwan rightly points out, the bishop’s letters and utterances could be “unctuous and condescending”.

McQuaid was a “hippopotamus in the parlour at Drumcondra” who at a later stage of the book is transformed into a “wily old fox”, then turns into a fish (“rose to the lure as a trout in a western lake to the mayfly”). He was also “entirely ready to resort to Islamic methods in the form of punctuated public calls to prayer” as “their Lordships bestrode the land like Ayatollahs”.

We are also treated to an elaboration on the crozier: “the crozier, while serving as an added decoration to their already much gilded Lordships, and while lacking the military origins and symbolism of the mace, did nonetheless have utilitarian function”.

He refers to the “doyens of medicine . . . pouring into the receptive ear of his Grace tidings of a most alarming kind”, but we are not told who they were or offered evidence as to what they were “pouring”. He suggests the legislature in 1951 was “perhaps excessively endowed with lawyers” without bothering to check if this is true (there were 14 lawyers in the Dáil at that time out of 147 members; there were a hell of a lot more farmers).

He also summarises, in a spectacular generalisation, “the difference between the English and Irish character; the former orderly and obedient, the latter intractable and truculent”, a pathetic stereotype invoked by those who justified British imperialism in Ireland.

There are bizarre assertions about other things: “It is a feature of all trade unions, particularly those of doctors and lawyers, that they will abandon all rational thought and reason.” Has Kirwan uncovered a previously undocumented episode of Irish history when a trade union for self-employed lawyers went mad? Unfortunately, but unsurprisingly, there are no further details provided.

Browne, meanwhile, “in real life” was an accomplished sailor: “he was however alas less competent at managing the metaphorical Episcopal wind than the real meteorological wind”. At another stage Browne’s tone was “somewhat evocative of John McEnroe’s outburst to the tennis umpire: ‘You cannot be serious’!”

Enough! Surely it is Kirwan who cannot be serious? And what was The Liffey Press thinking in publishing this dross?

Diarmaid Ferriter is professor of modern Irish history at UCD