Australian author Tim Winton on why writing is like surfing, why a tiny fish gives him hope, and why the next generation has a right to be angry at the mess they've inherited 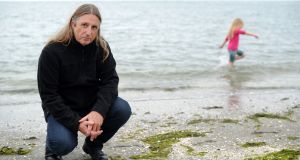 Tim Winton: “When our children ask us, ‘What did you do during the war?’ they’re not talking about guns and bombs. They’re talking about what we did during the battle to save the world.’ Photograph: Aidan Crawley

Last January, a group of marine biologists carried out research in the Kimberley region of Western Australia – an area of river gorges so remote that many of them can be accessed only by helicopter. It turned out to be worth the effort: they discovered a whopping 20 new species of fish, one of which they promptly named Hannia Wintoni after Tim Winton.

Now, how many novelists can say they have a new species named after them? “Yeah,” Winton chuckles. “That was a funny thing to happen. But don’t get too excited. It’s another species of grunter. Winton’s grunter. It’s a pretty little fish.”

Joking aside, this unusual tribute actually says a lot about Winton. His fiction has always been immersed in the landscape of western Australia. But in recent decades, he has also been increasingly involved in environmental activism, joining the fight to save Australia’s endangered coral reefs, and becoming a patron of the Native Australian Animals Trust.

His new book, The Boy Behind The Curtain: Notes from an Australian Life, is a collection of essays on topics that range from his own childhood to hospitals, class consciousness and sharks. The playful Barefoot in the Temple of Art describes how, after a week-long journey to Melbourne from Perth, the Winton kids were refused entry to the newly-opened National Gallery of Victoria because they weren’t wearing shoes. Stones for Bread doesn’t take national institutions so lightly: it’s a searing indictment of Australia’s policy on illegal immigrants.

The title essay paints a disturbing picture of Winton’s 12-year-old self, standing behind the curtain of their house, aiming his father’s rifle at strangers in the street. He never shot anyone – he never even loaded the gun. But the act haunts and, he admits, embarrasses him.

“If I’d been seen, if I’d been less careful – or less lucky – then my life would have gone very differently, I’m sure,” he says. Instead, the young Winton discovered words, and never looked back. “I guess that’s how the book came about; reflections on how I got here.”

While this new book is not a memoir – the essays were written at different times and for different reasons – he says it does examine connections and themes which recur throughout his novels. “Sudden turnings. Unexpected things where you feel like you’ve been T-boned. We live in this modern world where we think we’ve tamed everything. You can organise reality; then some small thing happens, and havoc is unleashed. Life’s fragile, and we forget that at our peril.”

In The Wait and the Flow, Winton draws parallels between writing, which he has done all his adult life, and surfing, which he has done since he was a kid. Now in his 50s, he’s still in the water most days. “It has taken me years to figure out that there are similarities between the surfer and the writer – or, at least, a writer like me,” he says. “A swell is simply radiating energy from an event across the horizon – it’s generated by something that’s already in the past. It’s something that happened two or three days ago.

“As a writer, you have to hold your nerve. I show up. I spend most of my time waiting. The waves of energy that come are psychic memories – events, almost all of them in the past, which radiate out. And, like the surfer, I go out to meet them. When something shows up you have to be alert and sharp enough to turn round and paddle hard enough to match its speed, and ride that momentum as far as it will go.”

The Boy Behind the Curtain explores some of the ways in which trauma radiates through people’s lives. “We know now from science that trauma changes our physical makeup,” Winton says. “It’s transmitted in the genes. Holocaust survivors and their children are affected in the same way as first peoples in Australia who were dispossessed. That stuff doesn’t go away. People don’t just suddenly snap out of it. It changes us.”

Winton’s happy suburban childhood was shattered when he was five. His father, a motorcycle policeman, was hit by a drunk driver and almost killed. He survived, and eventually recovered, but “we were no longer the safe, confident people we’d been before”. At the age of 18, Winton himself was a passenger in a car which ploughed into a girls’ school, leaving him “like a ghost in his own body”. Being hospitalised gave him time to think – and made him understand that time was precious. By the time he graduated from university he had written three books.

There are nuggets of information in these essays which will fascinate fans of Winton’s fiction. We see him wrestling to turn Dirt Music from a 1,200-page, six-kilo “turkey” – his word – into a classic that would make the 2002 Man Booker shortlist. We find him living in Ireland in the late 1980s, writing that most iconically Australian of novels, Cloudstreet. Both in print and in person, however, when he talks about the damage we’ve done to the planet – and our marked reluctance to do anything to put it right – Winton the nuanced observer of human nature becomes Winton the winged avenger.

I’m not quite sure how we get from talking about the desperate situation of the Great Barrier Reef to the subject of the former prime minister of Australia. But the mere mention of Tony Abbott sends Winton into what would be, if it wasn’t delivered in his mild, laidback way, a first-rate rant.

“One thing he was good at,” Winton says of Abbott, “was putting a crowbar into the spokes of every wheel. He wasn’t any good at building anything. He never made anything. He didn’t pass anything worth a pinch of shit. But he was a great wrecker. The man who stood for nothing – and shame on him, and shame on his party.”

Abbott’s successor, Malcolm Turnbull, has not been markedly more sympathetic to the environment. If anything, he is less so. How does Winton motivate himself to continue the environmental struggle in the face of official indifference – even sabotage?

“Those of us who are working on that stuff are doing it because what’s the alternative? To accept that we’re cactus? For our generation, when our children ask us, ‘What did you do during the war?’ they’re not talking about guns and bombs. They’re talking about what we did during the battle to save the world. And we’ll have to answer them.

“If ever there was a generation that had a right to be angry, it’s people who have inherited the mess that we’ve made: financially, socially, in terms of policy and, above all, ecologically.”

Is there anything to be said, after all that? There is. There is always a tiny fish of hope, swimming unseen and often unrecognised. Like Hannia Wintoni, perhaps.

“It just shows you what’s out there. It just shows how special Australia is. It may be a prosperous, first-world, post-industrial country. But we still live in this great wild place.”

The Boy Behind The Curtain is published by Picador

Béla Bartók: how music broadened the mind of a ‘nationalist’ composer
Real news has value SUBSCRIBE