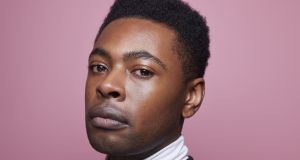 November 1964 saw the poet Patrick Kavanagh travel by train to the newly created Belfast Festival at Queens. After an altercation with the owner of the Club Bar, Kavanagh managed to make it to his gig at the Senior Common Room, and opened with the line: “Twenty years ago I had a great deal to say and nowhere to say it; now I have nothing to say.”

Fifty-six autumns on, the festival enters a period of having plenty to say, but no rooms to show it in. This year’s talks and ideas programme is entirely online, both limiting its physical presence, but broadening its reach through the new frontiers of the internet.

Now called the Belfast International Arts Festival, over the years it has navigated funding shortfalls, political strife and violence and the ending of the relationship with its founding body, Queen’s University.

Throughout all that, the spoken and written word and the brazen discussion of new ideas have been at the heart of the programme, bringing stars such as Anthony Burgess, Alex Haley (bankrolled by Playboy Magazine), Mary Robinson, George Melly and Sally Rooney to Belfast. Allied to that was a mission to bring new voices to Belfast audiences, with the early festivals being a symbol of the flowering of cultural life in ’60s Belfast with poets such as Seamus Heaney, Derek Mahon and Michael Longley being given their first platform.

In this year of pandemic, the festival’s literary manager, John Self, has taken the opportunity of online access to bring a cornucopia of voices down the line to Belfast, without the need for early flights to the City Airport or the scrambling of diaries. Speaking as someone who once did his job, sometimes the ability to wrangle artists to visit Belfast could be an effort, but this year sees no such issues. A new partnership with Westival in Mayo adds to the excitement and possibilities.

So who can we see down the line this year? The sheer range of writers and commentators is startling. Novelists loom large, with Sebastian Barry and Sarah Moss discussing their new works – Summerwater by Moss set in the Scottish Highlands, and Barry bringing A Thousand Moons, the follow-up to his hugely successful Days Without End (Oct 31st).

Perhaps the gig that sums up the global manuscript that this year’s festival is written on is the appearance of Scholastique Mukasonga and Nina Bouraoui. Both hailing from France, with roots in Rwanda and Algeria respectively, these two writers hold towering international reputations, but are largely unknown to audiences in the UK and Ireland (Nov 1st). The festival’s intent to bring the world to Belfast is writ large in a gig such as this and also in the appearance of Bryan Washington and Paul Mendez (Oct 31st). These are two young voices whose writing about being gay and black in America and the UK uncovers stories of resistance and love.

Non-fiction plays a huge role in this year’s festival interrogating the key issues of the day. Helen Lewis brings her Difficult Women, rescuing from history feminist heroes whose contradictions drove the movement for liberation on, while also creating conflict and dissension (Oct 24th). Cultural icon Stuart Maconie argues for the benefits of being raised by a so-called “nanny state”, an angry, humorous counterblast to the lazy received wisdom of postwar Britain’s decline (Oct 23rd). Jenni Murray, fresh from stepping down as the host of Radio 4’s Woman’s Hour after 33 years, comes to the festival with her book Fat Cow, Fat Chance, interrogating our relationship with food, weight and ageing (Oct 25th).

Festivals also give the chance to explore important figures and their lives. Lennie Goodings’ impact on the UK’s cultural life has been enormous (Oct 31st). As part of the Virago publishing house she edited the writing of such luminaries as Angela Carter, Maya Angelou, Marilynne Robinson and Margaret Atwood. Her memoir A Bite of the Apple allows readers a chance to relive the heady days of making literature new in the 1970s.

Readers of this newspaper will also enjoy the chance to see Patrick Freyne (Oct 24th), columnist to the stars, discuss his memoir OK, Let’s Do Your Stupid Idea. It’s as full of knee-slapping humour and compassionate humanity as his journalism.

The hot topics of the day refuse to lie quiet in the programme, with Sarah Churchwell and Michell Chresfield, both experts in US history and culture discussing Trump, Biden and how we got here, two nights before we find out which guy in a suit will be US President for the next four years (Nov 1st). The role of human rights and legal protection of minorities in the UK brings Kevin Maxwell and Nazir Afzal together, examining the modern maelstrom of law, race, prejudice and equality (Oct 24th).

Given the festival’s role in fostering some of the most distinctive postwar poetic voices, the programme is strong on poetry, with appearances from Nick Laird, Colette Bryce, Moyra Donaldson, Gail McConnell and Paul Muldoon bringing verse and rhyme to audiences, exploring history, grief, and our connection with place.

What will be missed this year? The energy of a room packed with hungry minds, the heat and light from an author’s reading and the humour and vitality of conversation heading off into the night and into the pub and beyond. But that will return, some day. And perhaps the intimacy of watching the close conversation between authors and thinkers will bring fresh insights and a new understanding to their work.

What will certainly be there, available to all those with an internet connection, is the world of ideas, words and humanity that the Belfast Festival has always presented, from its early days to these new, uncertain times
The Belfast International Arts Festival runs until Sunday, November 1st. For more information see belfastinternationalartsfestival.com