This year’s shortlist is a strong one, with the winner due to be announced on Thursday 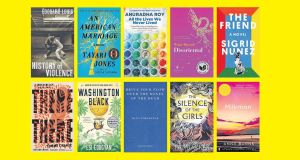 The 10 books shortlisted for this year's International Dublin Literary Award

This year’s International Dublin Literary Award, whose winner will be announced on Thursday, has a very strong shortlist. The long lead time – most were published in 2018 – gives the books time to mature, and several have been shortlisted elsewhere; although this does mean few surprises on the list. Here is a personal ranking, in reverse order of preference.

An American Marriage by Tayari Jones (Oneworld, £8.99, 336pp)
The cover of my copy of An American Marriage has so many medals and accolades you can barely see the title, but its appeal eluded me. The premise is strong: a young black couple struggles to sustain their marriage when the husband is wrongly jailed, and the wife begins an affair with a friend. It’s a talky book, well meaning and well made, but the three narrators all speak in the same ponderous, aphoristic way (“the vast generosity of women is a mysterious tunnel”) and I kept wanting to reach into the pages and mess it up a bit.

History of Violence by Édouard Louis, translated by Lorin Stein (Vintage, £8.99, 208pp)
Enfant célèbre Louis (he’s even younger than Sally Rooney, if that’s possible), in his second autobiographical novel, gives us the least festive Christmas story since Den served Angie with divorce papers. It centres on the narrator’s brutal rape by a man he picks up, the story made more complex by being largely told by his sister as he overhears her recounting it to her husband, with the unreliability that implies. Add in some racism and the odd essay-like digression and this is a short, elegant but fairly exhausting book.

Disoriental by Négar Djavadi, translated by Tina Kover (Europa Editions, £12.99, 352pp)
Kimiâ Sadr’s family lives by Thomas Jefferson’s words: “Every man has two countries; his own and France.” They are torn between Paris and their home country of Iran, where they resist equally the Shah’s regime and the “Ayatollah-ized” revolution. Kimiâ tells their history while waiting in a Paris fertility clinic. It’s vivid if occasionally overwhelming with detail – people, places, events and brand names – but by the end I felt that I’d learned a lot, and lived a bit of it too.

All the Lives We Never Lived by Anuradha Roy (Maclehose Press, £8.99, 336pp)
Rather like Disoriental, Roy’s novel has a character looking back at their family’s life over decades, taking in both personal and political turmoil. Myshkin, an elderly Indian man, tries to untie the knot of his mother’s life, her rebellious spirit and the real historical figures she met. “The older I grow, the less certain I am of certainty,” writes Myshkin, and his wandering story can be a bit inert, though a long section of his mother’s old letters livens up the second half.

Washington Black by Esi Edugyan (Serpent’s Tail, £8.99, 432pp)
This is the shortlist’s fat, smart, historical page-turner: I bet Amazon’s algorithm pairs it with The Essex Serpent. It’s a bold fantasy that wrongfoots readers by starting out like a slavery narrative but turning into a Vernian adventure story that roams from Barbados to London via Canada, taking in aquaria, disfigurement, suicide and heavier-than-air flight (I’ll believe it when I see it). If it has a weakness it’s that the serious undercurrents can get a bit buried beneath the whirligig pace of the ride.

The Silence of the Girls by Pat Barker (Penguin, £8.99, 336pp)
What’s that? Another rewrite of The Iliad? Oh goody. But this one is different, with Barker abandoning the first World War for an account of the Trojan war from the viewpoint, mostly, of the women captured by the Greeks, with Achilles getting the occasional look-in. Barker’s calm, lucid style on the one hand makes sex and violence a bit stately, but on the other fits the classical source well.

Milkman by Anna Burns (Faber, £8.99, 368pp)
You probably already know the Booker-winning, mega-selling Milkman, which tells the evasive story of a young woman in a shadow version of 1970s north Belfast. It’s a world with violence sewn into it, where sexual terrorism is as prevalent as the ordinary decent kind. For a story set in a time where “whatever you say, say nothing”, Burns doesn’t half tell her story slowly and at great length, with curling sentences and a style that doesn’t give up its secrets easily. Stylistically, it’s the opposite of The Friend (see below), but the time it takes means it stays with you. The struggle is real, but it’s worth it.

There There by Tommy Orange (Vintage, £8.99, 304pp)
The only shortlistee with a title inspired by both Radiohead and Gertrude Stein is a tragedy in the voices of a dozen Native Americans in Oakland, California, as they prepare for a community pow-wow. It’s not romanticised, with gun violence, drugs, mental ill-health and foetal alcohol syndrome; nor is it subtle. But the range of voices and styles – first-, second- and third-person narratives – and pacy energy make it gripping. “No one is interested in the Native American story,” says one character. “It’s too sad, so sad it can’t even be entertaining.” Au contraire!

The Friend by Sigrid Nunez (Virago, £8.99, 224pp)
This book about a woman who, after her friend’s suicide, takes on his dog, has become a popular phenomenon. You can see why: it’s clean and light, nutritious but not too stodgy. It reads more like an essay or memoir than a novel, done in tasteful tones and sprinkled with literary sources – Rilke, Ginzburg, Ackerley and, surprisingly, James Patterson – with thoughts on writing, sex and suicide. The depths therefore may be secondhand, but it’s smart enough to get away with it: “Please say nothing bad happens to the dog!” she imagines the reader imploring. (It doesn’t.)

Drive Your Plow Over the Bones of the Dead by Olga Tokarczuk, translated by Antonia Lloyd-Jones (Fitzcarraldo Editions, £8.99, 272pp)
Tokarczuk cocks a snook at mere mortal prize-winners Burns, Jones and Nunez by being the only Nobel laureate on the list. But the Nobel, to put it mildly, is no guarantee of a good read. Fortunately this is more than a good read, a crunchy, chewy novel with just the right mix of strangeness and clarity, about a woman surrounded by characters with names like Oddball and Dizzy, investigating mysterious deaths (or “metaphysical divorces” as she puts it) and using her invisibility (“Nobody takes any notice of old women”) to exact revenge. It’s wonderful.