Visiting Cork, I landed smack dab in the middle of unexpected personal history 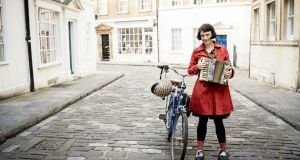 Emma Hooper: Musical identity isn’t a static thing, isn’t solid, but is, like us, a hodge-podge of what, and where, came before

People often say to me, “You don’t sound like you’re from around here.” If they’re brave enough to guess – or assume – where that not-here is, they usually mistake the origin of my exotic accent for one of two places: America (which they always apologise for, after) or Ireland. The first is to be expected; I’m prepared for that. The second, however, took me by surprise.

I’m a Canadian, now living in England. Like a lot of non-aboriginal Canadians, I think of my ancestral background as, “just a big mix of stuff, mostly Europe”, and think of my accent as “just normal (not-Quebequois) Canadian”. And then I went to Ireland...

A few years after I’d moved to the UK, there was a music conference I was meant to be presenting at in Cork. So, for the first time, I took a very short plane ride just a little west, and landed smack dab in the middle of unexpected personal history. As I met and spoke to people, or just listened to conversations around me, I was surprised to find that, yes, actually, there was something similar, something familiar about the way their voices curved around soft vowels, the way they cut the sharp corners of consonants… There was something here after all, a shared linguistic heritage, the hint of a shared voice. And then I went to an Irish pub’s music session…

Back in Canada, I started violin lessons when I was three (switching over to viola as soon as I was old enough to ask). Over the years I played my fair share of Bach and Mozart and the like, but, also, learned and loved lots of local fiddle and folk tunes. There was something deeply gratifying about their scrappy grit, their unabashed release of emotion, whether that be in the joy of a jig or hoedown, or in the unapologetic sorrow of an air or lament. There was cold, calculated beauty, pure and mathematical, in the classical works I played, but there was a raw humanness in the folk. These were the songs that needed no sheet music, no reminders; these were the songs I remembered off by heart, and these were the songs I would play when asked, unexpectedly, to “give us a tune”. These were Canadian folk tunes, this was the music of my home, my past.

Fast-forward to a wood-panelled pub in Cork many years later. I didn’t have an instrument with me, so I was just sat in the corner and listened while the fiddles and flutes around me picked up tune after tune, juggled them around between them, whirled and spun and moved on without pause to the next. There, pint in hand, listening, I realized: like the accents, these tunes were familiar too. They weren’t the same as the folk tunes I’d grown up with, but they weren’t terribly different either, they shared themes, motifs, melodies. They shared roots.

We’ve all had the experience of being caught off guard by hearing something that throws us back into our past. Maybe a Simon and Garfunkel song your parents listened to over and over when you were six. Maybe the song you slow-danced to with your high-school crush. Maybe the lullaby your dad used to sing to you when you were sad or scared. These experiences take you back into yourself, to a time when you were still you, but different, one of the many earlier variations of you that make up who you are now.

Hearing this music in the pub in Cork, and hearing the far-away yet familiar pull of the voices there, was different to these sorts of personal-history examples, but also the same. Listening, I wasn’t pulled back to a version of myself that was six, or 16, but, instead, to a version of myself that came long before I even existed: a self through long time, an ancestral link through sound, music.

Looking into it later, while researching my book, I found that there really didn’t seem to be such thing as a pure “Canadian” folk song; pretty much every tune I studied took me back, eventually, to somewhere else, Ireland, Scotland, Germany. (Unfortunately, and not without controversy, little to nothing remains in our national canon of any aboriginal music.) Music, I realised, and musical identity, isn’t a static thing, isn’t solid, but is, like us, a hodge-podge of what, and where, came before.

There’s a point in my book where one character tells another, “All songs are homesick songs”, spelling out, in essence, this lesson I came to learn about sound, music, history and heritage. Canada may only be 150 years old, but our heritage is much, much older than that. It has been sung and shared across oceans and generations over and over and over again. I am Canadian, but, really, that means I am Irish. I am Scottish. I am German and Aboriginal and Romanian. My self, my music, pulls out and back forever, to other, older times and paces. All my songs are homesick songs. All everyone’s songs are.
Our Homesick Songs by Emma Hooper is published by Fig Tree, price €15. It will be reviewed in The Irish Times on Saturday by Jane Urquhart