Girl With Dove: Capturing a child’s escape into literature 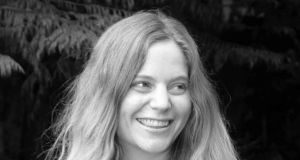 Sally Bayley: Fans of orderly, mapped-out narratives will likely be driven to distraction by her often experimental structure

When Sally Bayley first discovered words, they sat nicely on small squares of white card, much as they did for most youngsters. Soon, the words start to enmesh and come alive, transporting the young reader to different realities. A panopoly of new companions, born of the minds of great writers, were born.

“Reading, my grandmother told me was the stepping stone to better things,” she writes. “If you were a good reader you would never have to face all this.” Bayley’s All This was different to the All This of others.

By her own admission, concrete facts are few and far between in this memoir, but she remembers through a hazy fog of time her seaside town upbringing. Her mother and siblings, a dozen or so of them, live in a huge, dilapidated house, later joined by an indefatigable grandmother, Maze and Aunt Di. The house is freezing and dirty; the main fare, year in year out, is cheese on toast.

One morning, while her mother is boiling nappies, four-year-old Sally is tasked with minding her baby brother David, who “disappears”. Her mother goes to a dark place, taking to bed for a very long time, “two hundred sleeps, maybe more”.

The young Bayley retreats into the various foreign terrains in literature, first devouring the beginner’s books Peter and Jane and Milly-Molly-Mandy, but moving swiftly to the adult section of the library and on to Miss Marple, Jane Eyre, David Copperfield and Betsy Trotwood. Each of the fictional characters take on, to Bayley’s mind at least, the form of real people; as immediate and lifelike to her as the very strange women she lives with. The characters prove a lifeline in a childhood that the reader eventually realises has been pockmarked with neglect, isolation and trauma. The literary characters become her friends, her advisers, her eventual saviours.

Bayley’s family are compelling, but it’s the formidable and moving lines of much-loved prose, sketched long ago in the classics, that provide much of Girl With Dove’s horsepower

“I imagined murderers from St Mary Mead coming through the front-room window and dragging dead bodies there,” Bayley writes. “I imagined Miss Marple peering through her window before picking up the phone to Dolly Bantry. When I read Jane Eyre I imagined I was sitting with Helen Burns, her clever friend whose reading age was far ahead of mine.”

On the surface, Girl With Dove calls to mind another recent title, The Reading Cure, which also benefited mightily from the heft of the canon. Similarly, its writer Laura Freeman retreats into her imagination and recalls her life via the prism of books she has read in her life. When you are borrowing delicious lines from 169 works of literature, as Freeman did, the result is always going to be compelling.

And so it goes in Girl With Dove. Bayley’s family are compelling, certainly, but it’s the formidable and moving lines of much-loved prose, sketched long ago in the classics, that provide much of Girl With Dove’s horsepower.

Bayley recalls the chaos and confusion of her childhood as her younger self. She is a child with a precarious grasp on what’s going on in her own home. There is a powerful and vivid passage where a social worker intervenes, after the young Bayley visits a doctor’s office with malnutrition. The visit sparks a chain of events that sees her abandoned by her family and taken into Colwood children’s home.

Bayley’s blithe and childlike innocence is an intriguing device. Early on in the book, a man is found in the house simply lying on the livingroom floor, and Bayley believes him to be the victim of a wicked spell. “If you listen carefully, you can work out the things that adults don’t tell you,” she says, already in thrall to Miss Marple.

Bayley’s childhood voice allows for a lot of white space around her recollections. Granted, childhood memories are hazy and mysterious, not least in a miserable and disordered life such as Bayley’s. But this device, coupled with the cast of literary greats who flit in and out of Bayley’s life with nary a fanfare, results in a discombobulating reader experience. Fans of orderly, mapped-out narratives will likely be driven to distraction by Bayley’s often experimental structure.

That said, Bayley’s writing style is unforgettable, occasionally delivering lyrical and delicious prose. Once the reader is willing to walk away with many unanswered questions and little in the way of catharsis, Girl With Dove is a great reminder of the classics’ ability to transport, transform and, in some tragic cases, protect.