She was the last giant of science fiction’s golden age and her wit, intelligence, kindness and originality will be sorely missed. She also wrote me a letter when I was 10 years old 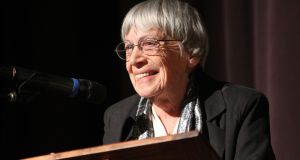 Ursula Le Guin: raised questions in the fields of science fiction and fantasy that no one else was asking at the time. Photograph: Jack Liu via The New York Times

In the long rainy summer of 1978 after a series of dull novels I finally could take it no more and I huffily demanded of the librarian “are there any books in existence as good as The Hobbit?”

The place was Carrickfergus, Co Antrim, and I was 10 years old.

“Yes,” the librarian said, “follow me” and she led me to an author called Ursula Le Guin in the science fiction section. “This one,” she said and put into my hands a copy of A Wizard of Earthsea. I was sceptical. The cover had a pensive-looking boy staring at the ocean in a battered paperback edition. But when I flipped the book open there was a map of an archipelago that didn’t exist anywhere in our world. “Ok,” I said and sat down on the floor and began reading.

The librarian tapped me on the shoulder, “We’re closing up now,” she said. When I looked out the window it was night-time and about four hours had gone by.

That’s what Ursula Le Guin who died on Monday, January 22nd, had the power to do. She created entire worlds that readers fell into and believed in utterly. Her complex, philosophical Earthsea books for children about a young trainee wizard were the gateway drug to her even more psychologically astute and ethically complex science fiction.

Le Guin raised questions in the fields of science fiction and fantasy that no one else was asking at the time. Questions about sexuality, gender, feminism the morality of war and peace. She knew that science fiction was a genre about ideas but a genre dominated by white men in their forties and fifties needed fresher ideas to keep it interesting.

Le Guin’s ideas came out of left field. She didn’t talk about it much (and it wasn’t mentioned in her New York Times obituary) but she went to the same high school and grew up in the same milieu as Philip K Dick. For PKD and Le Guin their big original ideas had to be backed up by consistent internal logic and intellectual rigor. If a planet has three genders instead of two how would that affect society? If a man’s wishes were always somehow coming true what nightmares would that induce? Could a society based on anarcho-syndicalism actually exist and if it could what would it look like? Should a species that doesn’t value its ecosystem even deserve to survive?

Le Guin came from an academic family and she didn’t suffer fools gladly (she wasn’t impressed by anyone in the Trump administration) but she was also an incredibly generous book blurber, encourager of young talent and teacher. I never met her in real life but my wife Leah took a short story class with her once and Leah remembers a mentor who saw patience and kindness as the highest virtues.

Later in that summer of 1978 I walked into a library in Carrickfergus and skeptically asked a librarian if anyone had ever written a book as good as A Wizard of Earthsea.

“You liked it then?” the librarian said.

“You should write to the author and tell her. Authors like to hear that sometimes and who knows she might even write back.”

It was the first time I’d ever written to an author and two months later an envelope came back with a Portland, Oregon postmark on it. Le Guin had taken the trouble to answer all my questions about Sparrowhawk, “the rule of names” and how exactly the magic worked on Earthsea.

Winner of the Hugo Award, Nebula Award, Locus Award, World Fantasy Award, in 2014 Le Guin was awarded the National Book Foundation Medal for Distinguished Contribution to American Letters. She was the last of the giants of the golden age of science fiction and her wit, intelligence, kindness and originality will be sorely missed.