The emperor’s new nose: a new poem about Donald Trump 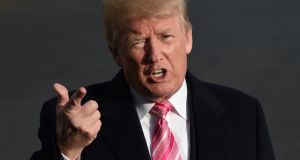 “Just one piece – they will never notice.”
“No, it was not I who cut the nose from Lincoln’s face,” he proclaimed,
As he secreted the piece in his pocket just before
He ordered the summary evisceration of his predecessor.

“It was not I,” he professed as black letters slicked their greasy trail,
Paving the way for war pipes to rumble over ancient bones turning in their sacred graves;
Erected a golden fountain to celebrate his glorious godhead;
Released a blue bird to spread his substitute truths far and wide.

Dodging bullets shot by his minion millions, still they came in their hopeful pink flocks –
Till he ordered every man, woman and child to beat great empty oil drums,
And one by one, famished and exhausted the little birds fell from the sky.
Yet a single pink canary survived, which he plucked mid-flight, stuffed into his voracious mouth and smiled his victorious smile.

“The people are hungry my Lord.” “Let them feast upon my bread!”
He declared, handing the peon a giant slice of empty air –
Which would be instantaneously replicated throughout the walled borders
Of his vast domain.

“Just one more piece – they will never notice,” he told himself as he reached
To snatch the last star from the ravaged sky and gorge upon its fire.