A Force for Justice: The Maurice McCabe Story review: Gathering all the strands into one sheaf

Despite exaggerations, the substance of his claims have stood up – and forced the Garda into being publicly accountable 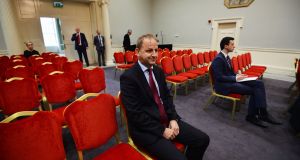 Sgt Maurice McCabe on the first day of the Charleton Tribunal at Dublin Castle on June 14th, 2017. Photograph: Alan Betson

Book Title:
A Force for Justice: The Maurice McCabe Story

Maurice McCabe is Ireland’s best-known garda. By any yardstick, his story is a remarkable one. Since emerging into the public domain as a whistleblower, his allegations have foreshortened the careers of two Garda commissioners, two ministers for justice, and a secretary general in the Department of Justice.

If that were not enough, his story has had another, grotesque twist: egregiously false allegations of sexual abuse that circulated around three State agencies for almost two years, unbeknownst to McCabe and his family.

Until 2007, McCabe’s life and career trajectories were in keeping with that of a rural garda operating in a rural Co Cavan town.

Michael Clifford’s book skilfully describes how that slightly taciturn existence came to an end, and traces the growing schism between McCabe and the force of which he was a dedicated member.

The linear narrative covers all his revelations about serious inadequacies within the Garda Síochána and all the consequences, for him and for others. Most have become very familiar to anyone who follows current affairs: Opposition TDs, particularly Mick Wallace and Clare Daly, raising the penalty points issue in the Dáil chamber; Martin Callinan’s use of the word “disgusting” at a Public Accounts Committee meeting; the inquiry by Sean Guerin; Alan Shatter’s resignation; the O’Higgins Commission; and then the false allegations, which could certainly be classified as Gubu.

Clifford is not conclusive as to why McCabe pursued the cause with such doggedness. There is no doubt it began in a cluster of events in 2007. McCabe made a formal complaint against a colleague for inappropriate behaviour at a crime scene. Some time later the colleague’s daughter made a complaint relating to an incident that occurred almost a decade earlier, which McCabe denied and which if it ever happened was horseplay that did not meet the threshold of criminality. McCabe was clearly aggrieved at the time it took his superiors to exonerate him. It seems it was then the well was poisoned.

Clifford is an Irish Examiner journalist who broke many of the major stories in this case. His prose style is fluid and conversational, and it makes for a very readable account. As well as gathering all the strands and twists into one sheaf, Clifford also effectively describes the toll the ordeal has had on the family.

To achieve that, he had access to the McCabe family and its supporters, but not the same access from the other side. The upshot is if you want to get an objective perspective of McCabe, it will not be found here. McCabe has flaws too but they are often euphemised or explained away.

For example, there are moral and ethical questions about recording every private conversation, which McCabe did to protect himself. Those who subscribe to consequentialism will say the ends justifies the means, as was seen when he was able to contradict a written memo of a meeting with senior gardaí. However, the leaking of his surreptitious recording of a meeting with confidential recipient Oliver Connolly – and particularly an unguarded private comment about Alan Shatter that might not bear scrutiny – effectively shafted Connolly. That incident is portrayed as being unfortunate but necessary in pursuit of a higher goal. But if the tables were turned and such a trick played on McCabe, you could only imagine his sense of injustice.

McCabe exaggerated some of his claims and too easily accused superiors of “corruption” – none of those specific allegations have been borne out to date. That said, the substance – his exposure of incompetencies, slipshod behaviour and malpractice – have stood up and, single-handedly, he has achieved what so many others have failed to do, to force the Garda Síochána into being publicly accountable.

His story is not quite Mr Smith Goes to Washington but not too far off it.