Book review: A former Irish Times columnist’s memoir of wrestling with faith as a boy and seminarian 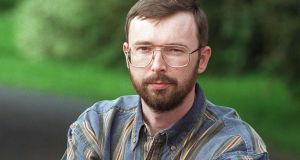 Joe Armstrong: “Religion demands the submission of the mind, heart, will and body to man-made rules and a man-made god […] but submission is the opposite of personal adult maturity, thinking and deciding for oneself.”Photograph: Alan Betson

Book Title:
In My Gut I Don’t Believe: A Memoir

In My Gut I Don’t Believe will stir emotional memories for a generation of men – and it is overwhelmingly about men reared in Catholic households in the 1960s and 1970s.

One of Armstrong’s early memories is praying with his mother on their knees before the picture of the Sacred Heart, she warning him of an all-seeing, all-knowing God. The memory will resonate with a generation of Catholic boys who grew up with a suspicion that their mother had a hotline to the Almighty, or a fear, as Armstrong had, that his mother’s love would be withheld, if God were to be offended in any way.

Armstrong says he felt a need to be seen to be “good”. To avoid disapproval from a mother who was yet to “be prescribed diazepam”. As a child he chose to copy the mannerisms of the local priest saying Mass, leading to whispers from his parents that there may be “a priest in the family”.

The late Pauline Armstrong does not emerge very well from Armstrong’s pages. She was his father’s second wife and he accuses her of chasing his elder half-brothers David and Paul out of their family home, of overzealous piety in a time when Catholics were ordinarily pious and required to “renounce Satan” at special parish “retreats”.

It was also a time when many religious beat and sexually abused boys with seeming impunity, and Armstrong did not escape that unscathed.

Armstrong’s father, Arthur, is portrayed as an opaque, decent man, who once muttered enigmatically about “unbelieviable things” his second wife did, but who died before explaining.

As a teenager Armstrong joined the Charismatic movement. There is a significant moment when in 1979 aged 17 he was at the Phoenix Park for the Papal Mass when Pope John Paul II’s plane flew over Dublin, and in the emotion of the moment Armstrong felt “the hair on my neck stood on end”.

It is an interesting date stamp for others of his generation. Some, including this reviewer, recall we had not gone to see the Pope in the Phoenix Park on the basis that popular claims of “Catholic Ireland” were triumphalism. To an outsider, Catholic Ireland could be seen to be a dark place indeed. Even as the Pope spoke, many of Armstrong’s generation were questioning priestly vocations and numbers of seminarians were on the cusp of freefall.

But it would be wrong to read Armstrong’s book as just another story of emancipation from the darker days of theocratic Ireland. It is a coming-of-age memoir. Two-thirds of the book detail his life from when he moved into the Marist Novitiate at Mount St Mary’s in Milltown, Dublin, aged 18 years. It was, he said, his “new family” and he remained in community for a decade, taking final vows, but leaving before being ordained.

Armstrong’s account of his time with the Marists is aided by voluminous journals kept from those years, searingly graphic in dealing with his struggles for obedience, belief and chastity, perhaps on occasion too honest, in relation to the hardships of espousing chastity.

Among the confreres he found a welcoming community, encouraged to be tactile, to “hug everything that moves” and hug anything that doesn’t move until it does. “If at home I’d felt isolated, here in the novitiate I was included and belonged”. Soon he would write: “Shorn of my religious identity I would be lost”. On a trip to London he recorded: “I felt the need to wear a lapel cross to secure for myself some sense of personal identity in the madding crowd”.

But in terms of obedience he agonised for the best part of a decade. He was hurt when he was not allowed to study psychology; he was hurt when the Marists did not open a facility in Northern Ireland when he wanted to work for peace; he was angered that the order wanted him to teach and ultimately annoyed when his decision to leave in 1985 was, he said, undermined by his superiors, resulting in him staying another three years.

“Religion demands the submission of the mind, heart, will and body to man-made rules and a man-made god […]but submission is the opposite of personal adult maturity, thinking and deciding for oneself…” he said.

His priestly path took nine years to the cusp of ordination; a year’s novitiate; a two-year baccalaurate in philosophy in Milltown, a three-year bachelor of arts in English and history at UCD and a three-year bachelor of divinity degree at Milltown. Twenty hopeful young men entered the novitiate of the Marist Fathers in Dublin in 1980. “All but three of us left, before or after ordination.”

This book details his journey into and out of the Marist community. Armstrong is now “a priest” of another sort. An author, a columnist, broadcaster and a humanist celebrant. As he says himself, it would take another volume to show the transition from belief to unbelief, after he left the Marists. In the end the reader might look forward to that volume. Most people clearly feel priestly vows are not for them, but what of God? Volume 2, please.