The Oxford Handbook of Modern Irish Theatre review: The best single volume on the subject 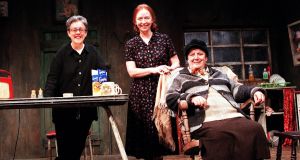 Gary Hynes, director, Marie Mullen and Anna Manahan on the set of ‘The Beauty Queen of Leenane’ at the Gaiety Theatre. Photograph: Cyril Byrne

Until quite recently, there was a fairly simple story about modern Irish theatre. It began in 1904 with the foundation of the Abbey Theatre. Its great figures were WB Yeats, John Synge and (less great but indispensable) Augusta Gregory, followed by Sean O’Casey and a few later figures: Samuel Beckett, inevitably but rather awkwardly; Brian Friel certainly; Tom Murphy perhaps; but probably not John B Keane. Women had relatively little to do with it, at least as far as the all-important dramatists were concerned. By far the most significant thing about it were the plays themselves – it was a literary theatre, valued primarily for the quality of the writing. At its heart was the Irish Revival, and at the heart of the Irish Revival was a dense linguistic fabric woven by poets of the stage.

Since the late 1980s, scholarly and critical work has been largely about unravelling this story, or at least complicating it beyond recognition. The excellent Oxford Handbook of Modern Irish Theatre, which takes its place as the best single volume on the subject, is the culmination of all that slow, careful work. It is one of those moments when you suddenly realise how all the chipping away by so many hands has completely transformed the statue, turning it in this case from a heroic monument to the Revival into a fluid modernist sculpture, all angles and approaches.

It is impossible to summarise the work of 41 contributors (representing three generations of scholars based in Ireland, Britain, the US, the Czech Republic and Australia) without resorting to a somewhat schematic overview. What that overview reveals, however, is that there are five big shifts at work in the way modern Irish theatre is now understood.

The first is in the notion of the Revival itself as a big-bang moment in which an Irish theatre came into existence from the void of a sleveen provincialism that merely aped English manners. This was, of course, the myth created and sustained by that propagandist of genius, Yeats himself. It is not that there is any desire in the Oxford Handbook to downplay the importance of the arch-poet or of the great Synge, who are given their proper due in superb essays by Terence Brown and Mary Burke. It is, rather, that there is a recognition that there were many very Irish things already under way long before the Abbey came on the scene. The handbook rightly fixes Dion Boucicault as a founding figure and brings Oscar Wilde and Bernard Shaw back into the frame, not just as exiles in distant London, writing to please English audiences, but as recurring, provocative and continuing presences on the Irish stage. There are, the book suggests, many revivals.

The second shift is the consequent revaluing of the work of women. When you move out of the shadow of a single Revival with its Mount Rushmore of great male playwrights, you get a sense of the richness of female engagements with the theatre as dramatists, choreographers, directors, designers and performers. Cathy Leeney’s chapter is a fine summary of her own groundbreaking work on female playwrights, with especially sympathetic treatments of Gregory and of Teresa Deevy (who has been more thoroughly re-examined in recent years in New York than in the Abbey theatre that inexplicably and shamefully dropped her.) But just as important is the strong presence of women ranging from Máire Nic Shiubhlaigh to Máiréad Ní Ghráda and from Siobhan McKenna to Garry Hynes. Arguably, Marina Carr might have been given a more extended consideration, but Melissa Sihra does a fine job of summarising her utterly distinctive body of work.

The third shift is a change of emphasis from play texts to living theatre. This represents a huge challenge to scholarship. The essence of theatre is, of course, that it is a form of presence – it happens in some mysterious connection between an actor and an audience. But words on the page are much easier to study. Reconstructing or evoking what actually happened is far tougher. It has, though, become possible, not just with changes of attitudes but with the availability of archives, many of them digitized by institutions, notably the James Hardiman Library at NUI Galway. The handbook is the first great flowering of this new archival approach, with terrific essays like Lauren Arrington’s exploration of the relationship between the Abbey and the State and Chris Morash’s fascinating work on theatre spaces, including such startling finds as the plans for an open theatre on Achill Island in 1941.

But most importantly there is a consistent foregrounding of actors, from Adrian Frazier’s splendid tour through Irish acting in the early 20th century to Nicholas Grene’s masterly overviews of the key performers of recent decades. When, for example, Lionel Pilkington recounts the story of the infamous prosecution of The Rose Tattoo in 1957, he focuses not just on the familiar political scandal, but on the subversive power of Anna Manahan’s central performance.

The fourth shift is away from the dominance of Sodom and Begorrah, the Gate and the Abbey. Both institutions are thoroughly considered – the Gate not just in the era of Micheál Mac Liammóir and Hilton Edwards but through Julie Bates’s comprehensive piece on Michael Colgan’s Beckett festivals. So, however, are the multitudinous alternatives, from the nationalist Theatre of Ireland before the Rising to the little theatres that kept hope alive in the 1950s to Field Day and Druid and Pan Pan and ANU. And the final shift is away from an inward-looking focus and towards an understanding of Irish theatre as a global form, both responding to international currents and making its presence felt on the world stage.

There are, inevitably, absences – one I especially regret is the unjustly neglected Kerry surrealist George Fitzmaurice. But the book as a whole is a wonderful achievement. It is always readable and jargon-free, illustrated with photographs, designs and posters that are often fresh to the eye and edited with a judicious balance between overall coherence and individual style. Such a hefty (and hideously expensive) tome might have felt like a mausoleum in which the tiny, evanescent moments that actually constitute a national theatrical tradition would be entombed and sanctified. Instead, it feels like a magic circle in which the shapes and voices of the living and the dead are summoned up to memory. It is a tribute to modern Irish theatre that it deserves such a book and a tribute to the editors and writers that they have given the Irish theatre the book it deserves.

Fintan O’Toole is a columnist with The Irish Times. He is editor of Modern Ireland in 100 Artworks which has just appeared as a book.