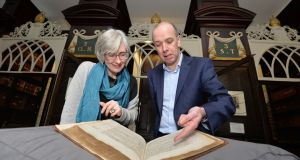 Amanda Bell, author of The Lost Book, and Jason McElligott, library keeper of Marsh’s Library, Dublin. They are looking at the Galeni Librorum, a rare book that went missing from the library, which is at the heart of Bell’s story. Photograph: Alan Betson

Once upon a time, a man wandered into a junk shop and found a dusty, battered book with a strange diamond pattern on the front. Inside, the pages were covered in letters from an alphabet he didn’t understand, but the ancient manuscript had cast a spell on him, so he bought it anyway. A little detective work revealed the stamp of Marsh’s Library on the inside cover. When he decided to return it to its original home, he discovered that it was a book of enormous significance, which had gone missing in unknown circumstances more than 100 years ago.

This is the premise of The Lost Library Book, a picture-book mystery for young readers by Amanda Bell. The author didn’t need to do too much research before she began crafting the story of the literary treasure hunt: it was Bell’s husband, the barrister Paddy Gageby, who found the missing library book in 2012.

Marsh’s Library, where we meet to discuss the mysterious disappearance of the Galeni Librorum, is tucked away behind a narrow metal gate in a high stone wall that extends from the back of St Patrick’s Cathedral. Despite the treasures inside, you could easily pass the library by without noticing. However, if you follow the peppery smell of leather up the stairs that lead inside, you will discover a tiny haven of history and learning, and a Gothic world in miniature.

Towers of books line the walls from floor to ceiling, their spines sharing secret codes of Latin and Greek that only the initiated can understand. The floorboards creak as you cross them, summoning ghosts from the graveyard it overlooks, including the spirit of Narcissus Marsh, the library’s eminent founder, who is said to haunt the library to this day.

Indeed, the library’s history is rich with stories of ghosts and ghouls. A three thousand year-old mummy was discovered in a cupboard in 1888. Several books bear bullet wounds from 1916, when rebel snipers were fighting on the street below. A cast of Jonathan Swift’s skull glowers behind the bars of a reading cage, in which readers were locked with precious books to prevent them from being stolen.

For library keeper Jason McElligott, the return of the long overdue copy of the Galeni Librorum is a vital new legend to add to the library’s lore. The medical encyclopedia was written by Galen of Pergamum, physician to Roman emperor Marcus Aurelius, in the first century AD. It was preserved in handwritten form until the 1500s, when it was printed for the first time, in five volumes, in its original language, Greek. Soon afterwards, an English medical doctor, Theodore Gulston, took it upon himself to annotate Galen’s text; to update it with the knowledge accrued in the 600 years since it had been written. It was one of the most important books in Marsh’s collection when the library opened in 1707, as the first public library in Ireland.

According to the library’s catalogues, the Galeni Librorum was last seen some time at the end of the 19th century. However, McElligot only discovered it was missing from the collection a few months before Gageby appeared at the library with “the book wrapped up in newspaper; a copy of The Irish Times”. By coincidence, the library had recently hosted “a scholar visiting from Berlin who wanted to study Gulston’s revisions. He was very disappointed that we only had four books from the five-volume study. That was the first time I realised it was missing. So when Paddy came in and said ‘I think this belongs to you. Do you know what it is?’ I said ‘Yes, I do’. And I knew it wasn’t just a rare and precious book we were looking at, but one that was associated with a particularly important person in the history of medicine – that it wasn’t just the book that was important but everything recorded in the margins.”

It was the marginalia that were the big attraction for Gageby when he first saw the book, crammed into a box of junk at his local curio shop.

“I didn’t examine it very carefully,” he says, “but there were a couple of things that caught my attention. I knew it was written in Greek, though I don’t read it. There were some tiny woodworms holes, which had gone all the way through the pages, but there didn’t appear to be any living ones. There were also some really beautiful inscriptions that looked like amendments and corrections and were obviously written with a good-quality stylus, as well as some very old pins attaching extra material to the pages. I really only bought it out of idle curiosity. It didn’t occur to me that it was valuable or that it would be of particular interest to anyone.”

It wasn’t until Gageby brought the book home that he noticed the Marsh’s Library stamp. “I was quite interested in antiquated books as a teenager,” he says, “and had been to Marsh’s Library a few times back then [in the late 1960s]. But I knew they didn’t lend out books. I began to wonder whether it had been sold off as some stage, so I decided to go in and find out.”

Gageby was right. The Galeni Librorum was not a missing loan. As McElligott explains, “it definitely wasn’t legitimately lent out, because we are not, and never have been, a lending library”. However, nor was it sold by the library when it passed on a few books in the 1800s as part of a fundraising campaign.

“The Galeni Librorum is one of a kind. It was hand-printed, so there is no duplicate. We would not have let it go.” Instead, McElligott suggests that the book’s disappearance was probably “an informal case of a librarian lending a book out to an eminent scholar, who got run over by a horse and cart, or something, and wasn’t able to return it.”

There is, of course, the possibility that the book was stolen. Indeed, the library’s catalogues tell a unique history of literary theft over the centuries. In the 18th century, the catalogue records various missing copies of English-language travelogues. In the 19th century, “it was popular novels and popular science that went walking”. In 1863, one user, George Matthews, was sent to prison for 12 months with hard labour for smuggling a book from the library. It wasn’t until the late 19th century, however, “that rare books started to go missing. There was a new awareness that there a market for these early books and the knowledge they contained.”

Libraries don’t tend to talk about thefts. There is a culture of secrecy around the library

Indeed, rare books can command big bucks on the black market these days. In February, a criminal gang stole more than £2 million worth of rare books from a warehouse in Heathrow Airport in a Mission Impossible-style heist, most probably for use as collateral in drug deals. However, “libraries don’t tend to talk about thefts”, McElligott says. “There is a culture of secrecy around the library, linked to the idea of the library as a perfect, infallible repository of knowledge. Also, it is well known that it is not necessarily the readers that are the problem. The most dangerous people in a library are often the senior staff: it is much easier for a staff member to smuggle a book out of the system.”

That sounds like a different type of book than the one Bell has written, which is far more romantic in its celebration of knowledge and the artefact of the physical book; an idea that is greatly enhanced by Alice Durand-Wietzel’s romantic illustrations.

It is a great story that children, and their parents, will delight in reading, and its happy ending is, indeed, the stuff of fairytales.