The Last Days of Mankind by Karl Kraus: translations of an epic drama reviewed

On the centenary of the Battle of the Somme, two versions of a classic antiwar play – one by Irishman Patrick Healy, one by Fred Bridgham and Edward Timms – are well-timed 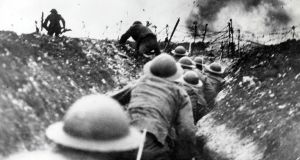 British troops go over the top from the trenches in the Battle of the Somme. Photograph: Popperfoto/Getty

So many ironies, so many truths, so much comedy, so much sorrow, and all expressed with an edgy eloquence shaped by equal measures of anger and genius in a deliriously frenetic kaleidoscopic pageant of an anti-war play.

The Last Days of Mankind (1920) was described by its author, the Viennese satirist Karl Kraus, as being “conceived for a theatre on Mars”. It would take a mere 10 nights to perform. Now, for the first time, the entire text, spanning more than 600 pages, is available in English, in two versions.

The Irish Joycean and polymath Patrick Healy, based in the Netherlands and with a specific interest in German-language Expressionist literature, has put a robust Dublin vernacular to effective use in a lively translation (published by November Editions, Amsterdam) that is meticulously alert to Kraus’s subversive nuance and range of personalities and clever stereotypes.

The formidable pairing of Fred Bridgham and Edward Timms, author of the two-volume Karl Kraus: Apocalyptic Satirist (1986, 2005), has rendered a heavier, more formal version (published by Yale University Press), which is stilted in places. Healy’s advantage may rest in his musicality and feel for the rhythms of speech. He has also recorded Finnegans Wake in a reading, which possibly explains why his Kraus is so vibrant. It also comes with a superb essay so, while reading both is interesting, Healy’s conversational version is more cohesive and engages closely with the linguistic virtuosity, bombastic panache and ambivalence.

In ways the theatrical equivalent of the works of German artist Otto Dix, Kraus’s masterwork is an astonishing collage of voices, representing an entire society: the military, the church, the detached onlooker, the bewildered ordinary citizen, the rich, the poor, the doomed and the hypocritical. There are also the telling asides, cliches and rhetoric.

As the longest play ever written, with a cast of close on 500 characters, it could be seen as a curiosity, but it is not. It is a work chronicling one era which is also relevant for every epoch. Kraus called it a tragedy in five acts and saw its theme as the end of a very specific civilisation.

His opposition to the first World War rings out on every page. Even more virulent, though, is his attack on the press barons and journalists who feed on wars. A self-important reporter named Miss Schalek personifies the very worst qualities of a hack indifferent to humanity and desperate for copy. As she swaggers about in search of quotes she notices a lone gunner. “Is that not a simple, nameless man, standing over there? He might well be able to tell me in straightforward words what it is that makes for war psychology. His task is that of tightening pulling [sic] the cord on the mortar – apparently quite a simple job, but what unforeseeable consequences are tied to this moment, both for the reckless enemy as well as for the Fatherland?”

What is he thinking as he fires the mortar? The soldier looks blank and admits “nothing at all”. Off she walks, seeking something she can write about.

Yes, it is polemical; Kraus spares no one, but is immensely entertaining, shocking and prophetic. Vienna, an ethnically diverse, anti-Semitic city of two million, with a population (more than half of which were not native) conversing in at least 15 official languages, was still the centre of a dying empire of about 58 million souls when Kraus began writing his epic.

Having refined his skills through his journal Die Fackel (The Torch), which he founded in 1899, he was a proven satirist. He remained in control of Die Fackel until his death in 1936 – not before the Nazis burned his writings. Suspicious of the power of the press, he denounced its manipulation of public opinion and its sloppy use of his beloved German language.

Born in 1874 in what is now the Czech Republic, he was the ninth child of Jewish parents whose wealth was based on paper manufacturing. The family moved to Vienna when he was three, so he was considered an assimilated Viennese Jewish intellectual of independent means. His father died in 1900. Confidence mixed with defiance – he had a slight spinal deformity which curtailed his acting ambitions and also made him vulnerable to lampooning – helped hone his satirical response to everything, particularly politics and all cant. It also assisted him in his preferred role, that of what Healy calls “the caustic outsider”.

The declaration of war prompted Kraus to write the play: by 1915 he had completed the prologue; by 1917, the epilogue. Most of The Last Days of Mankind was written between those years, with Kraus at times making changes and also devising a shorter stage version. Such a complex gestation creates problems when explaining its composition history. There is an inspired early comment: when a news vendor cries out that the heir to the throne has been assassinated by a Serb, a man strolling along the Ringstrasse with his wife, remarks: “Thank God it’s not a Jew.”

The declaration of war in 1914 provided Kraus with all the motivation he needed; he had spent years observing the impending disintegration. “Once adversaries have continuously outstripped one another with gas and tanks, they will be replaced by bacteria, and there will no longer be any resistance to the liberating idea of using epidemics, not as a result of war as has been the case thus far, but as the very instrument with which war is pursued. But . . . mankind even then will not be able to do without the romantic cover-up for its evil deeds.” So says the Grumbler, the Kraus figure who spends much of the play in discussion with his dim-witted cheerleader-like opposite, the Optimist.

The Optimist is eager to parrot official jargon, such as “war purifies”. He appears unfazed by the Grumbler’s responses and babbles cheerfully: “The German Kaiser has proclaimed that there are no more political parties – only Germans.” To which the Grumbler replies: “That might be fine for Germany, but people elsewhere may still have loftier ambitions.”

Elsewhere, Falke, a church warden, intones: “This war is punishment sent by God for the sins of the people, and we Germans and our allies are the executioners of the divine judgment.”

The scene moves immediately to another Protestant church, where a speaker shares his conviction: “Wars are the supreme tribunal and divine judgment in universal history. That’s why it’s God’s will that all people in this war make full use of all means and weapons he has made available to them in order to bring justice to the people.” Churchmen are not pleading for peace. “Look around you, the glittering achievements of the German spirit of enterprise,” says Pastor Geier. “It has created the marvel of the submarine. It has developed the miraculous gun whose shots go up into the ethereal celestial regions.”

Karl Kraus – aware that while the Somme raged on, generals dined in Vienna – looked to the sad reality. His fury is profound. The ancient Emperor Franz Josef ponders the hell he never wanted to happen and, no less than God, echoes his words. Kraus has long been a presence, explaining, goading, teasing; he influenced Bertolt Brecht and predates Joseph Roth’s The Radetzky March (1932).

From Vienna’s streets and coffee houses to the devastated landscape of the Somme, where Kraus depicts the dead walking among the gas-masked living, this dazzling indictment declaims anew in its entirety. Patrick Healy’s translation will mesmerise readers and should entice stage directors.