The Irish invasion of the comic book world: ‘We have so much talent’

Once fringe players, Irish creators are now at the peak of the global industry 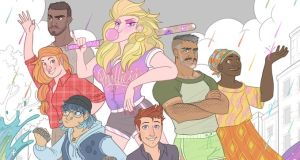 The world of comics has seen an Irish invasion in recent years, with top drawer talent emerging anywhere one cares to look.

Having once been fringe players in the global industry, Irish creators are now at the peak of the trade, and the results can be seen everywhere from locally made small press efforts, to huge marquee work for traditional titans of the comics world. If this is a cultural success story that’s passed you by, here’s just a few Celt-tinged comics for you to peruse.

DC has plenty of Irish representation, from Stephen Byrne’s iconic art for Legion of Superheroes and Wonder Twins, to Cian Tormey’s work on Batgirl and Injustice: Year Zero. The latter’s art on Injustice: Year Zero #3 generated a flurry of publicity this Summer when he drew 2020’s most iconic panel, in which a disdainful Joker clarifying his dislike for Nazis. “I’m a homicidal maniac, not a traitorous bigot” read Tom Taylor’s script, causing a stir among those who found such a sentiment notable in 2020.

“I went to New York Comic Con a couple of years ago” Tormey tells me, “and the number of us there – Irish creators and fans – was significant enough that it was remarked on by quite a few people. We have so much talent here and thanks to social media we can find each other more easily - and be found by editors who are looking for new voices”.

At Marvel, Cork’s Will Sliney has long-since cemented himself as an institution with work on multiple Marvel Star Wars properties and Spider-Man 2099. Younger readers may recognise him from his stint doing drawing lessons for RTÉ’s Home School Hub, but another fine achievement is his mythical masterwork Celtic Warrior: The Legend of Cú Chulainn. Written and drawn by Sliney, it’s a great reworking of the Ulster Cycle, featuring Ireland’s own original superhero (and unapologetic murderer of large dogs).

Another Marvel heavyweight, Ennis’s own Declan Shalvey, most recently drew this month’s cover for Wolverine: Black, White & Blood. His work for Stan Lee’s stable was commemorated earlier this year with The Art of Declan Shalvey, a monograph edition collecting dozens of his Marvel covers, a first for any Irish artist. This year he also wrote the Irish noir Bog Bodies (Image) with fellow Irish creators Gavin Fullerton and Rebecca Nalty (on artwork and colouring respectively). A gritty tale of gangland vengeance in the Dublin mountains, Bog Bodies is one of the year’s best, and most uncompromising, graphic novels, and almost certainly the only one that opens with an excerpt from the Six One news.

No discussion of Irish comics can go too long without mentioning Garth Ennis, unquestionably the most high-profile Irish creator of the past quarter century. Having made his name writing for 2000AD, the Belfast man etched himself into the high pantheon of comics writers by creating crossover behemoth Preacher and, ten years later, The Boys – both recently adapted into much-lauded TV outings. This year saw him write The Stringbags, which ditches the hyper violence and sexual themes of the former, in favour of a straight-shooting naval aviation drama.

Holden has been no slouch in 2020 himself, complimenting ongoing work with 2000AD with other projects, including his ongoing #FolkloreThursday series with writer John Reppion. For this, they post a weekly comic strip on Twitter focusing on some aspect of global folklore, myth, legend or rumour, all of which and more can be accessed by supporting their “holdenreppion” page on Patreon.

On that subject, this year has seen non-traditional and emerging platforms hum with Irish talent. There’s been an explosion of webcomics and ongoing online series. Hugh Madden’s Treasure Island is a case in point, a page by page graphic retelling of Robert Louis Stevenson’s adventure classic. Released entirely via his Twitter (@hughmaddenart) it’s gorgeously drafted in a squiggly, cartoonish style pitched somewhere between Hayao Miyazaki and Nick Park. This is all-ages fun that will have you scrolling for hours, and all for the price of a few taps of your thumb.

If your taste runs to Irish-produced efforts, Dublin’s Rogue Comics imprint has an embarrassment of pulpy delights on offer for the discerning localist. My pick has to be second World War horror Nazferatu, by Wayne Talbot and Kevin Keane, in which a vampiric villain descends upon two soldiers hoping to infiltrate a Nazi weapons factory. Kilkenny’s Stephen Morton espouses an even more local approach or, as he puts it, “I self publish short comics in me shed”. Surreal, offbeat and utterly brilliant, his 16 page opus My Favourite Poet Is Raymond Kertezc cannot be done justice here, so you better just buy it, via stephenmorton.bigcartel.com.

Artist Stephen Mooney took 2020 by storm with his run on Avengers offshoot spy caper, Web of the Black Widow, featuring Jody Houser on writing duties, and Dundrum’s Triona Farrell on colours. He and Farrell also promise more “Dames, Dinosaurs and Danger” with the next instalment of Half Past Danger (IDW). Suffice to say, his series’ “Raiders of the Lost Ark meets Jurassic Park” stylings more than delivered on that promise, and his latest chapter raised over €20,000 on Kickstarter for a Half Past Danger Christmas Special that should be with us in time for the festive rush.

Farrell has done so much great work for Marvel, Dark Horse, Image and Vault, it’s hard to nail down a single thing to recommend. When asked to suggest one herself, she opted for cheerfully demented superhero space opera Lords of Empyre: Emperor Hulkling series for Marvel (script by Chip Zdarsky & Anthony Olivera, art by Manuel Garcia and Cam Smith) saying, “that book was a blast to work on and very, very gay”.

If that only whets your whistle for comics at their most riotously camp and affirmingly inclusive, crowdfunding has also been the route for Dublin transplant Chris Fildes’s Fanny Galactic: Tuck To The Future, in which our titular drag queen heroine is trapped in time, for a sci-fi phantasmagoria that’s out, proud, and laugh-out-loud. Kickstarter has also given life to Glitter Vipers, a Manchester-set fable about a nebulous gang of queer heroes who set out to avenge a homophobic attack on one of their own. Written by Joe Glass, its toothsomely toony art is by Meath’s Kate Fleming whose endearing gay werewolf comic 100 Times, and its sequel 100 More Times (both written with her partner E Kerr) cannot be recommended highly enough.

On the longer front, Luke Healy’s Americana (Nobrow) is a luxuriously roomy account of his hike from Mexico to Canada along the Pacific Crest Trail. It’s smart, funny, restrained and beautifully drawn in the soft reds, whites and blues of its chosen country. The comedy and drama of his 2,000 mile journey is delivered in a hundred lovely little moments of ecstatic truth, making for one of the finest graphic memoirs I can recall reading for many years. Fans of Healy’s work can also avail of In The Monstrous Belly Of The Whale, a tale of adaptation, climate change and at least one actual, monster-sized whale. You can read it for free via his Twitter, or at his website, LukeHealy.info

Monaghan’s Dearbhla Kelly is another colourist making waves across the industry, with exemplary work on 2019’s psychedelic fantasy Queen Of Bad Dreams (Vault) and this year’s Pantomime (Mad Cave). The latter, scripted by Christopher Sebela and drawn by David Stoll, is a genre-mixing action/mystery/crime caper set in a school for children with hearing disabilities. Kelly’s dynamic, fluid colours are particularly skillful in giving life to Stoll’s renditions of American Sign Language, accomplishing the feat so effortlessly you hardly notice the skill it must have required.

When asked how she explains the success of so many of her comic-creating compatriots, Kelly is matter-of-fact. “The comics community tends to be very supportive of each other so if one creator has success they lift others along”.

So Irish comics is just one big happy commune then?

“I actually do have a bunch of American comics pals who say they want to all come live in a big house together in Ireland about once a week” she confirms, “so I guess we do give off that vibe”.