A new work by Paul Murray 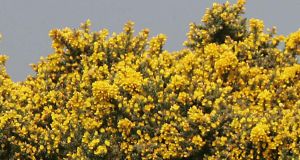 If the Kingdom of God had first been announced,
not in Palestine, but instead in a town, a place
near to the Mountains of Mourne, I feel sure
that the most likely symbol chosen would not
have been a dragnet, or a pearl, or a mustard seed,
and not even, perhaps, that most telling image
of life in the kingdom, the lilies of the field –
no, it would have been a plant, a shrub
so familiar to us we take it for granted, I mean
the gorse plant, that yellow-flowered, spiky,
evergreen bush that blossoms and thrives
all the year round in the valleys and on the hillsides
of Mourne, and flourishes even on the high,
rocky slopes of Slieve Binnian and Slieve Donard.