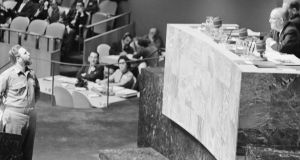 Cuban premier Fidel Castro in a verbal exchange with UN General Assembly President Frederick Boland, right, who had called him to order for a breach of diplomatic conduct when Castro brought up the US presidential election

In September 1960, as world leaders gathered in New York for the 15th General Assembly of the United Nations, the veteran Irish diplomat, Frederick Boland, had a ringside seat.

The general assembly itself opened amid a backdrop of international drama. Cold War tensions, which had begun to ease in 1959, had increased precipitously following the shooting down of a U-2 spy plane over Russian territory in May 1960, and the subsequent acrimonious failure of a disarmament summit in Paris. Meanwhile the newly independent Congo found itself embroiled in Cold War intrigue after Patrice Lumumba, its new prime minister, had accepted much-needed financial and military assistance from Moscow in his efforts to battle a Belgian-backed secessionist movement in the south of the country.

In his opening remarks on the afternoon of Tuesday, September 20th, Boland – who had prevailed over Czechoslovakia’s Jiri Nosek in the election for Assembly President by 46 votes to 25 – expressed his satisfaction and pride that a representative of Ireland had been chosen to preside over the deliberations at what was a critical moment in world history.

He also promised to discharge his responsibilities in a way that would “win the trust and confidence of the Assembly as a whole”. Turning his attention to the bigger picture, Boland predicted that the 15th General Assembly might well be one of the “most momentous” diplomatic gatherings that “the world has ever seen”.

Boland was right: the 15th General Assembly remains one of the most extraordinary in the history of the United Nations. In part, this was because the session saw the admission of more than a dozen newly-independent African nations – including Cameroon, Congo, Ivory Coast, Mali, Nigeria and Senegal. But its reputation as a great diplomatic set-piece of the mid-20th century also owed much to the antics of two individuals: Fidel Castro, the bearded young revolutionary who had seized power in Cuba in January 1959; and Nikita Khrushchev, the de facto leader of the Soviet Union, who had manoeuvred his way to the top in the months following Stalin’s death, on March 5th, 1953.

Barely 24 hours after his arrival in New York, and with wild rumours circulating that the Cubans had been plucking and cooking chickens in their rooms, Fidel – dressed in his trademark drab olive fatigues – had stormed out of his plush midtown hotel after a row with the owner.

After meeting with the UN Secretary-General, Dag Hammarskjöld, and threatening to set up a makeshift camp in the UN Rose Garden, the Cuban leader accepted an offer of hospitality from the Hotel Theresa, the so-called Waldorf of Harlem. His first guest – the black nationalist firebrand, Malcolm X – set the tone for his stay.

Over the coming days, Fidel would receive a rapturous reception from the local African American community, hold court with a succession of luminaries – including Khrushchev, Gamal Abdel Nasser, Jawaharlal Nehru and Kwame Nkrumah – and promote the politics of anti-imperialism, racial equality, and leftist revolution with a fervour, and an audacity, that would make him an icon of the 1960s.

Khrushchev, meanwhile, arrived in New York Harbour, aboard the Baltika, on the morning of Monday, September 19th, to be greeted by jeering, placard-wearing protesters: one sign read, ‘DEAR K! DROP DEAD YOU BUM’. Despite the provocations, in public the Soviet leader was emollient, expressing his “great respect for the American nation”, and joshing with journalists from the balcony of the Soviet Mission on Park Avenue.

Khrushchev also turned on the charm for Fidel – making a point of travelling to the Hotel Theresa, where he shared a very public embrace with the Cuban leader and, a few days later, appearing supremely unruffled when the young revolutionary arrived more than 40 minutes late for dinner, leaving him pacing up and down on the sidewalk.

Inside the Assembly, though, things were rather different. In his acceptance speech, Boland had told the Assembly that it would not be at all surprising if £the fundamental differences of policy and outlook which divide the world find sharp and even vehement expression here in our discussions”. But even he could not have anticipated what was to transpire.

On the afternoon of Monday, September 26th, Fidel delivered his speech to the General Assembly. Lasting for almost four and a half hours – still a record – it offered a robust defence of the achievements of the Cuban Revolution; a long denunciation of US exploitation of Latin America; and a stirring rallying call for the global anti-imperialist movement.

Towards the end, though, Boland was forced to interject twice: first, after Fidel had declared that both Richard Nixon and John F Kennedy – who were battling each other for the presidency – lacked “political brains”; and then when he had threatened to make disobliging remarks about Spain’s General Franco.

But Fidel was a pussycat compared with Khrushchev – whose regular interjections, gesticulations and outbursts from the Assembly floor tested the patience of even some of his Eastern bloc comrades. On September 29th, the Soviet leader took great offence at Harold Macmillan when, in his speech, the British prime minister praised the energy and integrity of the UN Secretary General and lamented the recent failure of the Paris summit to bring about meaningful disarmament.

Glowering, and banging on his desk, Khrushchev leaped to his feet and began shouting – in Russian. Macmillan looked up from his notes, turned to Boland and, in a wry put-down that prompted ripples of laughter throughout the chamber, simply said, “I’d like that translated, if I may”.

Most famously of all, on the afternoon of October 12th, when a Filipino diplomat accused the Soviet Union of practising “colonialism” in eastern Europe, Khrushchev, his face flushed red, leaped to his feet and began pounding on his desk with his right shoe. In his desperate attempts to restore order, Boland banged his ceremonial gavel so hard that it broke, and the session had to be adjourned.

The presidency had, Boland later noted, “turned out to be a very tough assignment”. But his efforts and demeanour earned widespread praise. By his own estimate, when it came to his mailbag, “the favourable comment is about 95% of the total” – although even his many Irish Americans fans complained that he had let Fidel go on for too long.

Meanwhile, Ireland’s foreign minister, Frank Aiken, reported that Boland had “earned great praise for his handling of debates”, allowing heads of state “a certain license” but drawing the line at personal attacks.

In the days after the “shoe” incident, moreover, Boland’s office was inundated with gavels from sympathetic delegations – and even the Soviets apologised: Khrushchev sent him a crate of wine and declared himself “well satisfied with the objectivity of the Chair and hoped it would continue”.

For Boland, as for so many others, Khrushchev was an enigma: “He is the personification of elemental violence … power-drunk and a doctrinaire. These dangerous qualities are tempered in his case, however, by an extraordinarily sharp intelligence, a keen sense of humour and, I would say, a good deal of plain humanity.”

The Fifteenth General Assembly mattered. The admission of more than a dozen new African states, together with the adoption – in December – of Resolution 1514, which declared the process of liberation “irresistible and irreversible” and called for a “speedy end to colonialism in all its forms”, struck a powerful symbolic blow against imperialism.

Meanwhile the excellent personal chemistry between Fidel and Khrushchev, which was on show to the world in New York, served to cement a critically important strategic relationship between those two countries: an alliance that, in October 1962, took the world to the brink of nuclear Armageddon.
Simon Hall is author of Ten Days in Harlem: Fidel Castro and the Making of the 1960s (Faber & Faber). He is professor of modern history at the University of Leeds