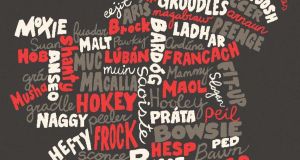 Runner n. (colloq.), a ‘blow-in’, a newcomer to a district (R Drew, Dublin); ‘There’s many a runner in Dún Laoghaire these days.’

Searoost adj., embarrassed, ‘I’d be searoost to speak in public’

Skinnymalink n. (colloq.), a tall bony person. (Origin uncertain; Beale s.v. ‘skinny malink’ gives it as a Canadian variant of skinamalink, which is itself a variant of skila malink (19th-century London slang), secret, ‘shady’; a correspondent quoted s.v. ‘skilamalink’ writes: ‘In my early youth (c. 1910-1925) I occasionally met “skinamalink”, a derisory noun or nickname for unusually skinny and undersized individuals . . . its form is, apparently, based on skilamalink, but its meaning is that of “skilligareen”,’ which is glossed as ‘an extremely thin person’ and as possibly being derived from a slurring of ‘skin-and-bones’; cf. Ó Dónaill s.v. ‘scilligeoir’: ‘1. sheller (of grain, etc.), 2. incessant talker, prater, prattler.’) ‘Skinnymalink melodeon-legs, big banana feet’ (child’s rhyme)

Misfortunate adj., unfortunate < E dial. <mis- + fortunate. ‘That was a quare misfortunate thing to happen to that man’

To make strange phr., to become uncomfortable or nervous or uneasy or distraught ‘That child never makes strange, even when she meets new people – her brother was the very opposite.’

Fit in the expression ‘fit to be tied’, meaning frustrated, angry. ‘I was fit to be tied in the traffic-jam yesterday’

Only adv. 1. Used loosely as an intensive. ‘The music was only famous’ (was really good); ‘You’re only gorgeous’ (Dublin). ‘He never gives me peace, only nagging at me night, noon and morning’

Launa-vaula also launawaula n., adj.,a sufficiency, quite enough; inebriated; the affection shown by people when they are drunk < Ir lán an mhála, the full of the bag. ‘I have launa-vaula here, thanks very much’; ‘They were lán an mhála coming home from the village’

Listen v.imp., the courteous way in which the speaker on a phone call in Ireland signals that he or she wishes to end the call (ML, Mayo). ‘Listen, I’ll talk to you again.’

Peggy’s leg n., a sweet in the form of a longish stalk; a stick of ‘rock’ (origin obscure, but cf. E dial. peggy, the stick used for turning the clothes around in a wash-tub; peggylegs, the supports on the end of the peggy). ‘May Stevens’ was the only shop to sell Peggy’s legs in the village, but now she’s dead’.

Hames n.pl., the wooden or metal pieces forming the collar on a horse, to which the traces are attached (cf. Kavanagh, Tarry Flynn, 62: “The harness wasn’t in the best condition. The collar needed lining and the traces were tied with bits of wire in two places. He couldn’t find the hamesstrap”); fig. a mess, in the phrase ‘to make a hames of’, to make a mess of (possibly because it is difficult to put the hames on a horse the right way up) < ME hames < M Du. ‘You’d use bluestone [copper sulphate] to rub on the sore ness made by the hames on the horse’s neck’. ‘Where is he? Let me at him; he made a hames of my field’.

Lúbán n. 1. Something twisted and its shape distorted; fig. a failure to do something right < Ir < LÚB. ‘You’re making a lúbán of it’ (to someone trying to repair something) 2. A LÚBAIRE. ‘He’s a proper lúbán; he trims his sails to suit the wind’
The Dictionary of Hiberno-English, compiled and edited by Dr Terence Patrick Dolan (who died last year) with a new foreword by Blindboy Boatclub, is published by Gill.