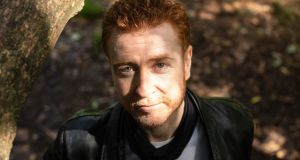 Tony Wright: the former lead singer of And So I Watch You From Afar and author of Chapter & Verse(ChorusVerse). Photograph: Fionn Crossan

Every morning I sit down at my desk in my living room, open my laptop to get on with whatever it is I need to do. Sometimes it’s creative, sometimes it’s menial, but every day I’m there.

And every morning, usually around 11, the curtains in the flat across the road from me open, and there he is. He’s about 20 years older than me, usually topless as he’s just awake. When he opens his window to have a cigarette I watch him as he looks down on the street below to see what’s going on. At this point I usually slide my chair slightly to the left so we’re not facing each other.

I hate him. I hate seeing his old skinny, flabby torso, his weathered face and his disappearing head of hair. I hate seeing him flick ash onto the street and dropping the cigarette onto the street below. But luckily this little session of my own personal malice only lasts as long as the cigarette. After this he closes the window and disappears from sight. I go back to not being distracted. Distracted by my thoughts of him.

The day goes on and then in comes the evening. I might still be at my desk if I’ve hit a patch of creativity or I’ve fallen behind in my admin stuff. Maybe I’m watching some television. I’ll hear some voices outside and my curiosity tends to get the better of me so I’ll look outside to see whats happening. Often one of the voices will belong to my adjacent neighbour arguing with himself as he walks back to his building, drunk, and carrying alcohol with him.

My disdain builds again. I watch him struggle to get his key in the front door, and sometimes I watch him hammer all the buzzers and kick at the front door, shouting, because he’s forgotten his key. What a fucking waste of space I think. I always think that to myself. I know it’s not very good to be for thinking that way about my neighbour. But I think it anyway.

When he’s back indoors, I see the light from his apartment flick on through the thin curtains, and then go off again to be replaced by flashing lights. These are probably from the television, which is on far too loud, the sound bleeding from his slightly open windows across the road to my slightly open window and into my flat. Where I’m sitting actually, also watching television.

This morning, I sat at my desk as always, and went about my work. Shortly before 11, he pulled his curtains back, appearing in front of me topless again. I expected him to open the window and smoke, completing steps two and three of his observed ritual – and he did, in time – but first, he turned to his left and reached out for something.

This was new. I hadn’t seen this part of the process before. To his left, never before noticed by me, was a large birdcage. He opened the door and a pale blue bird flew out and onto his shoulder. The man smiled, raised his hand and fed it some seed, and then the bird flew from his shoulder and around his flat, stretching its wings.

I stopped pretending to type and looked over as the man, watching it fly around the room, then he turned and left, leaving the bird to enjoy its temporary freedom. I thought, I’ve been all wrong about this man. I’ve seen a whole other side to him, just from this one little detail. A piece of information about his story.

He has another heartbeat in his life, in his home.

And then I hated him a little more.

A little differently though.

Because he isn’t as lonely as me.
Tony Wright is the former guitarist of And So I Watch You From Afar and author of Chapter & Verse(ChorusVerse).  The audiobook version was written, narrated, edited and produced by Tony Wright - completed in May 2020 whilst in isolation in Glasgow where, in a masterstroke of timing, he had only just moved pre-pandemic. Tony would not advise anyone to undertake such a task whilst living alone in a state of lockdown, when the only voice you hear for weeks is your own; re-telling both funny and painful tales from your own past. Not only re-living past trauma but also constantly thinking, ugh, do I really sound like that? Tony's friends, loved ones and therapist fully endorse this advice. Get Stephen Fry, Helen Mirren, Jedward or anyone else to do it instead. Having said that, he is immensely proud of the achievement - from start to finish - and is 100 per cent confident you will enjoy the experience of listening to it, a lot more than he did editing it.  Tony now lives in Belfast again among old friends and is doing marvellously. Or so he says. Chapter & Verse(ChorusVerse) is available on Audible and everywhere else now

John Creedon: The outsiders who left their names in Ireland
4

Let’s Do It: So detailed, we can’t see Victoria Wood for the trees
5