Deirdre Sullivan: I’ve always been drawn to fairytales, particularly the darker ones

The children’s author on Savage Her Reply, a reworking of the Children of Lir 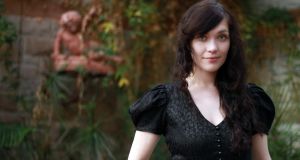 “The stories we hear when we are children shape us, don’t they?” observes Aife, the narrator of Savage Her Reply, a stirring retelling by Deirdre Sullivan of the ancient Irish folktale of The Children of Lir.

The myth was a touchstone for Sullivan herself, who vividly remembers the first time she encountered it, in Michael Scott’s tragic version of the story, which was illustrated with romantic precision by Jim Fitzpatrick. Sullivan chose the book on one of the weekly visits she made with her mother to Galway City Library as a child.

“I became obsessed with the story”, she says. “But I wasn’t just interested in the children transforming into swans. I was fascinated by the character of Aífe. She is a huge part of the narrative, but once she is punished she disappears. I was the kind of child who stayed awake at night worrying about the books I read and I always wondered what happened to her, what being a demon of the air – her fate – entails.”

However, it wasn’t just the ancient story that captivated Sullivan. “When you encounter a story as a child,” she continues, “you can often have an emotional connection to the tangible object of the book. It is amazing really, how this small rectangle made of paper can be a comfort object, and [Michael Scott’s Children of Lir] was one for me. I remember viscerally not wanting to return the book, but I knew the rules, that I had to.” Sullivan borrowed The Children of Lir again and again, and it became an important part in shaping her imagination as both a reader and a writer.

Sullivan is speaking to me on Zoom from her small flat in Ranelagh, where crates of books – “the to-be-read crates” – sit on the floor behind her in front of a stuffed floor to ceiling bookcase that her cat, Arthur Conan Doyle, standing on his hind legs, peruses as we chat. Organised thematically, they include contemporary novels, classic literature, “books by people I know and like”, and, perhaps the largest crate, a towering pile of books about myth and fairytale.

“I have always been drawn to fairytales,” Sullivan explains, “particularly the darker ones, where you feel things could have gone better or a different way. I did like the happy endings but I suppose I was more interested in stories when that is denied to someone in a very truthful way. Like The Little Mermaid: she did everything right and still got punished. Or the nightingale in The Nightingale and the Rose, who gives up his heart to help the student and it ends very unhappily.”

Sullivan began writing seriously while completing a masters in education, when Siobhán Parkinson, who had just established Little Island press, came to teach a course designed to inspire the aspiring teachers’ creativity. After reading her coursework, Parkinson commissioned Sullivan to write what would become the Prim series, a coming-of-age story for young adults told in diary form. Needlework, a dark story of a young woman overcoming a childhood marred by abuse, followed.

However, it was with Tangleweed and Brine, her award-winning modern reworking of classic fairytales, which was published by Little Island in 2017, that Sullivan really found her voice. “I have always considered that books grow from other books,” she observes, and the stories in Tangleweed and Brine reflected both the coming-of-age interests of her first books and her longlife passion for fairytales; their classic structure and archetypal concerns. These types of stories, she discovered, lent themselves to her unique voice and vision.

The Children of Lir fit that template too, and Sullivan originally included a new version of the story in her first draft of Tangleweed and Brine. However, despite the similarities, “I couldn’t make it fit. For it to be a cohesive collection, I needed stories that came from a similar space. The other stories were fairytales, and The Children of Lir comes from a canon of myth and legend. If I were to combine the two, the book would have become a different beast.”

However, Sullivan kept her initial draft, and when Little Island approached her about writing another collection of contemporary fairytales, Sullivan pitched “a small thing, a novella really, based on The Children of Lir. Siobhan Parkinson just said ‘go for it’, so I did, but as soon as I started working I realised that a lot of preconceptions that I had about the story, about Irish myth and folklore, were exactly that and that I had a lot more research and reading to do if I was to do it justice.”

The Children of Lir wasn’t a simple story, as she had first assumed. “It occupied a hybrid space between myth and fairytale, and tangled within it were lots of other stories that I needed to explore.”

She did a lot of deskwork: the endnotes in the book provide a useful resource for anyone interested in similar territory. But there was field work to attend to too. Sullivan travelled to Newry, for example, to find the site of the Sídh of Femuin, where much of the story takes place. “There I was standing in a carpark, littered with crumpled bags of chips,” she laughs. “But it was also a beautiful space, and it was an important trip: it connected me to the story in a very real way. Personally, I have always found it relatively easy to step into the shoes of someone in the 1940s or Georgian Dublin. But when you are writing something that comes from a space that is thousands of years behind you, the picture gets fuzzier and fuzzier. [The trip] helped me to get a clear picture of where I was writing from.”

That said, it is voice, rather than place, that dominates Savage Her Reply; Aife’s voice, which is presented in traditional narrative form and as a series of calligrams interspersed throughout the text. These ogham poems deliberately take their shape from the ancient Irish alphabet. “They give Aife the language to tell her own story,” Sullivan says. “And they helped me give shape to her emotion and her feeling, to pinpoint the deep things she was feeling in her poor heart.”

The “little Children of Lir project”, then, is a different beast than Sullivan first imagined. Beautifully produced in a glossy hardback illustrated by Karen Vaughan, Savage Her Reply is epic and intimate, brutal and beautiful, the story of a silenced woman allowed to speak. It is as assured in tone as you would expect from an award-winning writer with a decade of experience behind her, but it is bold in its experiment with form too, as Sullivan pushes both her craft and the scope of her interests to create a memorable excavation of a story that you thought you knew.

Savage Her Reply is published by Little Island

Savage Her Reply is Sullivan’s 10th book. It is published by Little Island, which also celebrates a decade in publishing this year. Founded by Siobhán Parkinson in 2010, Little Island provides a home to 55 writers and illustrators creating books for young readers, 0-18. Headed by Parkinson, Little Island has been a key force in launching many debut Irish authors, including Sullivan, Meg Grehan and Sheena Wilkinson; supporting established voices such as Patricia Forde; and creating opportunities for Irish readers to engage with international voices by translating contemporary classics of children’s literature into English for the first time.