Aesop’s Fables: The Cruelty of the Gods review: A welcome feast of fables for our times

Carlo Gébler’s book is a wonderful, gloomy and welcome addition to the Aesopic corpus 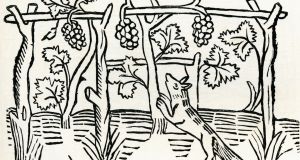 Book Title:
Aesop’s Fables: The Cruelty of the Gods

“The nest of mice lived in an empty old house, bothering nobody.

One day a cat climbed through a broken window and got into the kitchen.

Snap, snap, snap, the cat went to work. The kitchen was filled with the sound; the thudding of the cat’s paws on the floor, the high-pitched screams of the mice as he tore them to pieces and the piteous cries of the mice who escaped . . .”

The Mice and the Cat illustrates Carlo Gébler at his stylish best, brilliantly rewriting an Aesopic fable in prose that crunches on the page.

The standard index of Aesop’s fables, by Edwin Perry, lists 997 fables attributed to Aesop, and many hundreds more not attributed to him. A labyrinthine network of manuscripts containing Aesopic fables has been produced since the earliest collections appeared around the first century AD, and post-Gutenberg this is matched by innumerable printed editions. Now Carlo Gébler has added a new selection to this field full of fables. Why?

He believes the fables have a special relevance today. “In his [Aesop’s] fables, the gods and goddesses who exercise power tend to be capricious, wilful, thoughtless and unforgiving, while the powerless, the mortals (many of whom are animals) . . . tend to be blind, deluded, foolish and careless . . .when we are in trouble, as we are today, we revert to the literature of the ancients.” (p.7)

That some of those in power right now are capricious and thoughtless is beyond dispute. But do Aesop’s fables, in general, convey this message?

Gébler’s selection of 190 fables is drawn from a 1927 French collection by Émile Chambry. Like most editors of Aesop, Chambry would have been selective and subjective. Many of the fables included here definitely illustrate Gébler’s point – that the mighty are ruthless and always win. But the most popular Aesopic fables, insofar as one can generalise about the vast genre, usually promote “the social virtues which make life comfortable . . . loyalty, gratitude, moderation, resignation, industry, and so on.” (Handford, Fables of Aesop, Penguin 1954).

One could add wit and pragmatism to that list. The Crow and the Pitcher tells of the crow who can’t drink from a jug with some water at the bottom. He drops pebbles into the pitcher and raises the level of the water. The Hare and the Tortoise demonstrates the ability of the underdog to vanquish the strong using wit and patience. In many Aesopic fables, the powerful are indeed ruthless, but the underdog comes out on top.

That said, The Cruelty of the Gods is a wonderful, gloomy and welcome addition to the Aesopic corpus. Some of the fables are familiar – The Grapes and the Fox, The Hare and the Tortoise. Many are esoteric. There are fewer animal fables than is usual in Aesop (it’s estimated that 75 per cent of all Aesopic fables are animal fables.) Here, just over a third fall into this category; the rest are about humans or gods, or both.

They have been classified into sections with darkly seductive headings: Caprice, Arrogance, and the Exercise of Arbitrary Power, Jealousy, Covetousness and Greed. The headings provide interpretations of the fables in advance – in keeping with the tradition of the fable to spell out the message. The stories have been re-written in a spiky, contemporary style:

“I am the fastest out of us two,” said the tortoise.

“Don’t say things like that,” said the hare. “They only make you look stupid.”

“But I am,” the tortoise persisted.

“You’re not,” said the hare, who was becoming mildly vexed.”I am. Ask any animal who’s the fastest out of you and me and you will get the same answer every time. Me. The hare. I.Am.The. Fastest” (p. 124)

The content of these pessimistic stories is thought-provoking but what makes the collection absolutely delightful is the vigour and originality of Carlo Gébler’s writing. The illustrations by Gavin Weston are likewise magnificent. The fables attributed to the mysterious Aesop, who probably lived in Greece in the 5th century BC, have always been used to express the point of view of the teller, to suit the mood of the time. They are flexible, which is one reason for their continuous appeal to writers through the centuries. This new selection is quirky and darkly sparkling – a welcome feast of fables for our times.

Éilís Ní Dhuibhne’s latest book is Twelve Thousand Days: a Memoir. She is president of the Folklore of Ireland Society, a member of Aosdana, and an ambassador for the Irish Writers’ Centre.