The Heavens review: The calamities of our age written as an intricate drama of moral philosophy 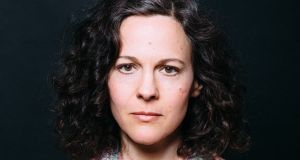 Throughout Sandra Newman’s new novel there is an exquisitely calibrated strangeness.

When Kate and Ben first meet, all is not just well with the world but extravagantly well. It is the year 2000, but rebooted, “a year when you opened the newspaper like opening a gift”. Here the president is an Asian-American woman; carbon emissions are in decline; there is peace in the Middle East. They fall in love extravagantly too, quoting from Apollinaire as they ascend to a Manhattan roof garden. Gazing at Kate as she sleeps, Ben is “in her absolute and permanent thrall”.

In these utopian scenes, and throughout Sandra Newman’s new novel, there is an exquisitely calibrated strangeness. We confront both a recognisable New York, where wealthy socialites cultivate bohemian darlings, and a counterfactual fairyland, outlandishly benign but expertly tricked out. It’s plausible, just about. And it’s heartbreaking. Because here in 2019, opening the newspaper is like abseiling into the Ninth Circle. We can’t deal with this right now. We all have anxiety.

Luckily, everything is about to get worse, not least for Kate and Ben. Their first hours together are heady and rapturous, yet even as they recline on their balcony, there are faint intimations. The night sky is occluded, leaving them to sigh beneath “obsolete stars”. It’s a beautiful aside, but for lovers probably not a great sign. Worse than star-crossed, they are starless. The heavens are deserted.

Oh, and Kate has a question. ‘Do you remember your dreams?’ she says.

Dreams, it turns out, are kind of a thing with Kate. Among her friends it’s a running joke. She has learned to be circumspect. But they’re serious, these dreams. They’re important somehow. In her dreams, she is somewhere else, somewhere unaccountably familiar. But it’s not just that. She is someone else. “She knew the bed, the house, the great city. But it wasn’t Kate who knew them. It was the person she was sleeping as.” In love, her dreams intensify. Within them she awakens, or someone does. We glimpse this person, in passages of miraculously skilful exposition, recognisably, then unmistakably.

Emilia Bassano (later Lanier), was England’s first published woman poet. By some accounts the “dark lady” of Shakespeare’s sonnets, she has long been the subject of scholarly tussling. Here she chews up the pages. Thwarted prodigy and reluctant courtesan, she is subtle, guileful and fiercely alive. It is 1593, a plague year, and London’s courtiers are in exile. Emilia takes refuge at Cowdray, seat of the Earl of Southhampton (himself the “fair youth” of the sonnets) and a household humid with intrigue. As the mistress of the Lord Chamberlain, she is courted by players in want of patronage. Among these is Sad Will, a lugubrious striver with a handful of plays to his name. Guess who.

Readers are often impatient with dream sequences, expecting six or seven pages of portentous italics that need not detain them. Emilia’s sections are no mere distractions, but form a glittering centrepiece which, as an exercise in historical fiction, could easily have stood alone. Newman has business elsewhere, but if she treats Tudor England like she owns the place, it’s because she evidently does. She is simply unerring, deeply read and possessed of a phenomenal ear for diction. She is judicious, though, and sparing with her prithees. The loveliest passages have an unmannered grace, as when Emilia joins a hunt, “her heart stooping as the hawk stooped and arrowed from the sky to pluck a fleeing hare”.

But Emilia’s life is not just immersively real, it is vastly consequential. At Cowdray, she and Sad Will chafe at their enforced idleness, exchanging barbs and sneaking away for trysts. He longs for London, where his stage stands empty, but Emilia is troubled by the prospect. A vision recurs. She sees a dead world, “a burnt Manhattan, its abandoned towers scabbed with dirt and ice”.There is something she must do.

In a celebrated story from 1952, Ray Bradbury imagined a time traveller who crushes a butterfly in the Cretaceous period and returns to find a fascist occupying the White House. Like that could ever happen. At first Emilia’s interventions have subtle repercussions - Kate wakes to “anomalies, discrepancies, attacks of jamais vu” - but then things get worse. Much worse. As the catastrophes pile up, Kate is still anxiously checking whether people have heard of Shakespeare. The thing with Kate, at this point, is that she seems to be nuts.

We get it, though. Kate is all of us. How can people be burning oil still? How can that guy be president? The calamities of our age, in this novel, are also an intricate drama of moral philosophy. Like all dramas, it has a resolution, and one of such eye-popping metaphysical grandeur that I couldn’t spoil it even if I wanted to. The Heavens consoles us with the magnificence of our capacities, but in the end it leaves us in no doubt. Sure, we are such stuff as dreams are made on, but it doesn’t look good for the great globe itself.

Paraic O’Donnell is a novelist and critic. His most recent novel, The House on Vesper Sands, is published by Weidenfeld & Nicolson.