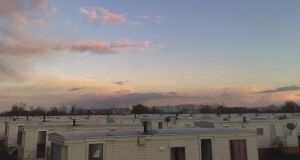 In mid-October 2017, actor Stephen Rea introduced a lecture at NUI Galway on the rights of people living in direct provision. The event was also attended by poet Jessica Traynor who read a piece she had written on the Mosney centre for asylum seekers in Co Meath.

A week later the pair met again at a second event, this time in Derry, as part of the Séamus Deane annual Field Day lectures which centred around the topic of “the right to have rights”.

Fifteen months on, in January 2019, Rea and Traynor announced plans for an anthology featuring the work of artists and writers who had lived through or are currently experiencing life in direct provision. The goal of the artistic collection, entitled Correspondences, was to “call for an end to a system” responsible for “a severe violation of human rights”.

“What struck me was a lot of people had done things about direct provision but nothing ever seems to coalesce into a big statement,” says Rea when we meet at the Epic emigration museum in Dublin. Traynor, who is deputy director of the museum, agrees that a new approach was needed to highlight the lived experience of those caught up in the asylum process.

“As artists we do believe in the power of art to change, to raise awareness and to create empathy,” she says. “We wanted to create a clear message that the anthology is calling for an end to direct provision, not for improvements or half measures.”

Inspired by the words of fellow poet and friend Sarah Clancy, Traynor wanted to highlight the parallels between those living in the system today and the countless women and children who were incarcerated in workhouses and institutions in Ireland throughout the 20th century.

“If you were asked to give a writing workshop in a Magdalene laundry what would you say? Would it be, I’ll go in and won’t it be wonderful for these women who are unjustly incarcerated that they are getting the benefit of writing? Or would you simply work towards shutting down the system?”

Both agree that anti-immigrant, xenophobic rhetoric is gaining ground in Ireland

Traynor aimed to build a collaborative project which would project the voices of immigrant artists with the support and guidance of Irish professionals already established in the field. She also consulted author Melatu Uche Okorie, who has written about the direct provision experience, to avoid “ghettoising people into an anthology”.

“I was wary of the notion of simply seeking submissions, putting things in a book and publishing it. I thought let’s open it up to visual artists, photographers, people writing personal essays and people who simply want to tell their own stories.”

Rea’s collaboration with the project was driven by a sense of despair caused by the failure of most public representatives to address the shortcomings within Ireland’s asylum system.

“No party has made it their mission statement and that’s something I don’t understand. What’s the point in talking about improving society when that’s the first thing they need to improve, it seems to me. The role of the family is acknowledged in the Constitution and that just doesn’t mean native white Irish people. It means any Irish family. And these are Irish people.”

Both artists agree that anti-immigrant, xenophobic rhetoric is gaining ground in Ireland and that efforts need to be made to curb any attempts to isolate or vilify asylum seekers.

Calls for the Irish government to “look after our own” before tending to the needs of those from abroad, reflect the false dichotomy which exists between funding for hospital beds and the arts, says Traynor.

“We feel this disconnect because these people are not integrated into society, they’re locked away. We don’t even see the people in the direct provision centres, they’re kept separate. I firmly believe that my daughter in the future will be sitting me down and going what did you know about this? What did you do?”

Traynor and Rea initially received a huge response to the Correspondences call-out from Irish artists seeking to collaborate but found it more challenging to contact those actually living within the asylum system who are often completely segregated from Irish society.

Among those they did reach, they found many were scared to speak out. “They just don’t have the confidence and I can’t convince them to submit. A huge number of people said they didn’t want to appear ungrateful, that’s been a really common theme.”

You cannot assume that people in direct provision have the spare time to dedicate to an artistic project, she adds. “Direct provision is the busiest, most boring atmosphere in the world. That comes up time and time again from talking to people. It’s intensely boring but you’re scheduled to within an inch of your life.”

Through her work at the Epic museum, Traynor is consistently reminded of the barriers and obstacles faced by the millions of Irish who left this island seeking greater opportunities overseas.

“We cannot celebrate our own emigrant story and shut out all the other stories. The Irish diaspora’s success is the story of the benefits of migration to culture, art and science. We’re a small island, we do punch above our weight but we cannot fall into the trap of thinking that somehow we are more acceptable migrants because of hundreds of years of history.”

The pair plan to continue collecting submissions until they run out of money for contributors. The goal is to publish in September and to include work from both North and South. “I think what will come out of it will be eclectic and interesting,” says Traynor. “It will be an arts anthology rather than simply a writing anthology with some photography as well.”

Those who have heard of the system often simplify asylum seekers into two groups, good immigrants and bad immigrants, adds Traynor. “People are not aware of the complexities and the nuances. I find there’s a huge amount of prejudice, especially towards Nigerian immigrants. The big ticket items like Libya and Syrian, that’s easy to understand, but the various small, local, hidden conflicts, that’s a more difficult story to tell.”