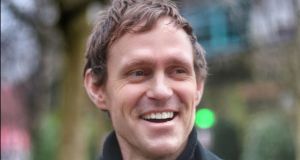 If there are only seven basic plots in storytelling, as the maxim goes, you have to hand it to authors down through the ages for their loaves and fishes way with narrative. David Brennan’s debut novel is a clear case of “a stranger comes to town”, but in the visceral, topsy-turvy world of Upperdown it’s fair to say that the Tipperary author gives us a vibrant new take on an age old story.

From Upperchurch, near Thurles, Brennan has written a book that is in part a modern, twisted retelling of the Pied Piper of Hamelin. One would hope that the parallels between the author’s hometown and his fictional Upperdown are in name alone, for the latter is a grisly place where murder, missing girls and a rat infestation unsettle the close-knit community. Our narrator is a sketchy character, Prof Joe Schultz, a genius mathematician in his 50s whose traumatic family past comes back to haunt him with the arrival in town of the Piano Man. Though the handsome music maestro is both a hit with the ladies and rids the town of its rat problem, the professor becomes suspicious of his motives when people, including the professor’s best friend, start to die.

The big success of Brennan’s book, whose subplots and myriad characters become unwieldy by the end, is in the unique voice and circumstances of his narrator. Both linguistically and in terms of detail, the professor comes to life for the reader. Obsessed with the Riemann hypothesis and prime numbers, even his humdrum existence before he turns amateur detective offers pleasure for the reader: “I boils the pot with 23 eggs inside. I eats two a morning. The 24th egg I always leaves outside. For the fairies.” Brennan has the voice pitch perfect, allowing him to further lift his narrative by peppering the book with interesting asides that chime with the professor’s interior thoughts: “The mind is a treacherous bastard that will swindle you down little squiggly untraceable irretraceable pathways that lead to bottomless nowhere.”

Brennan deftly mixes the professor’s backstory into the enlightenments. Brother Ned has spent years in a mental institution: “Maybe Ned and me is two forms of the same thing? Energy never dies but is transformed only from one kind into another.” Meanwhile, younger sister Nora died in mysterious circumstances as a child: “I knows, knows I, someday I will not see her again. Some processes are irreversible; the second law of thermodynamic, they says. Can you un-boil an egg? Nora.”

Unfortunately from a plot perspective, the backstory of the professor’s family is far more interesting than the present day detective work

The book’s tension comes from the professor’s complicity in Nora’s death – with some genuinely startling passages about the past – and his role in the current spate of murders. As the clues and red herrings pile up, everyone in the town comes under suspicion. In both plot and style, there are strong echoes of the novels of Jess Kidd, Himself in particular, with more distant echoes of Synge’s playboy, the original stranger in town. (The professor even has his own widow who may be a help or a hindrance.) The creativity of the hermetic community in Alan McMonagle’s debut novel Ithaca also comes to mind.

Elsewhere, in poignantly depicted scenes between the professor and his dementia-riddled mother, the gnawing questions about the past have an air of Charles Causley’s Lulu poem: “She fell mother, didn’t she? She slipped into the river by accident didn’t she mother? And why didn’t she put on a coat mother? It must have been so cold mother? So dark mother down there in the river. She couldn’t have seen anything could she have mother?”

A writer with a keen sense of style, Brennan was a winner in The Irish Writers Centre Novel Fair 2017 and was recently nominated for The Irish Times Hennessy New Irish Writer Award 2019. In 2016, he won the Frank O’Connor Mentorship Bursary Award, and he has been shortlisted for the Bristol Short Story award, the Fish Memoire award and the Doolin Short Story award. His way with setting in his debut is commendable, from the offal offering in the town butcher’s, to “the nine carved voussoirs” of the Cathedral, to “Airs n Graces, a shut-down strip shop”. Upperdown is a liminal, transgressive place where malevolent forces are at work both externally and within the mind of the protagonist.

Unfortunately from a plot perspective, the backstory of the professor’s family is far more interesting than the present day detective work. Ultimately there are too many characters and diversions in town, and the book lacks the rigorous structure needed to pull off a good whodunnit. But readers will keep going to the end regardless, caught up in the captivating voice of the professor and the colourful, macabre world of Upperdown. For we are certainly invested by this stage, and as the professor would say himself: “Manners is the line which separates us from the animals.”