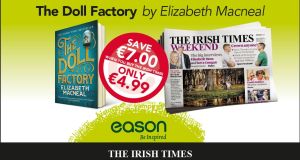 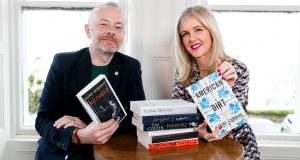 This Saturday’s Irish Times Eason offer is The Doll Factory by Elizabeth Macneal. When you buy the newspaper at any branch, you can purchase a copy of the page-turning thriller for just €4.99, a saving of €7. Anna Carey, reviewing it in The Irish Times, wrote: “Emotionally and intellectually engaging, Elizabeth Macneal’s debut is a stunner”.

The Royal Irish Academy Michel Déon Prize for Non-Fiction 2020 is open for nominations from both the public and the publishing community as of today. Visit ria.ie/michel-deon-prize for more information. Breandán MacSuibhne won the inaugural prize of €10,000 in December 2018.

Rick O’Shea and Sinéad Moriarty have recommended their latest Eason Must Reads for 2020, including American Dirt by Jenaine Cummins; Actress by Anne Enright; Highfire by Eoin Colfer; Big Girl Small Town by Michelle Gallen; and Apeirogon by Colum McCann.

Saturday’s books pages feature a great interview with Sebastian Barry by John Self, tackling many of today’s hot topics from #MeToo to cultural appropriation and commemorating Ireland’s troubled past. In Weekend Review, Turtle Bunbury explores the ancient but little-known Roman-Irish connection; and in Magazine, Conner Habib, an American writer living in Ireland, whose Twitter thread about all the things he loves about this country went viral, warms to his theme in a heart-warming essay.

Our reviews include Joseph O’Connor on Tales of Boomtown Glory by Bob Geldof; John Self on The Good, the Bad and the Little Bit Stupid by Marina Lewycka; Paschal Donohoe on Capital and Ideology by Thomas Piketty; Rabeea Saleem on Laura Cassidy’s Walk of Fame by Alan McMonagle; Bobby McDonagh on Three Years in Hell by Fintan O’Toole; Chris Mullin On The State of Secrecy by Richard Norton-Taylor; Abi Andrews on Losing Eden by Lucy Jones; Eoin McNamee on The Five: The Untold Lives of the Women Killed by Jack the Ripper by Hallie Rubenhold; Sarah Gilmartin on Oona by Alice Lyons; and Claire Hennesy on the best new YA fiction.