Review: Two books explain how to remain healthy for longer; one claims ageing can be cured 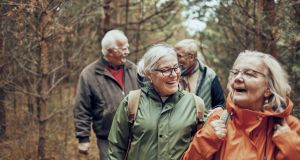 Pollock accepts ageing as an inevitable part of life, to be handled as sympathetically as possible. Steele sees it as a condition not unlike an illness, which can be “cured”. File photograph: Getty Images

The Book About Getting Older by Dr Lucy Pollock (Michael Joseph, £16.99)
Ageless by Andrew Steele (Bloomsbury, £20)

“In 2018, the age at which British women most commonly died was 89; for men the favourite age of departure was 86.” Dr Lucy Pollock doesn’t give information on the situation in the Republic of Ireland, although she refers frequently to Northern Ireland when discussing health services and legal issues, but the Central Statistics Office gives similar figures for Ireland. According to Andrew Steele, author of the second book under review , “the maximum life expectancy has increased by three months every year since 1840”.

8 Before you buy an electric vehicle, ask: Will I drive it enough to make it eco-friendly?

12 Finn McRedmond: Wokeness is dying, another victim of the pandemic

23 Joey Carbery on the Munster bench again for Connacht clash

25 Long Covid in children: New data is cause for concern, scientists say

40 Nanny state? After the mess here in Texas, I’d give my right arm to live in one