South Dublin up in arms about local rates since 1849 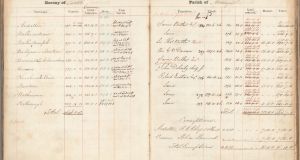 One of the first valuation books

Problems arising from the valuation of property and reluctance on the part of the public to pay local taxes based on property are not new. When the government valuation of Ireland was first carried out in the middle of the 19th century, occupiers in the barony of Rathdown in south Co Dublin were not happy with what was proposed and made vociferous and ultimately successful objection. This barony covered approximately the area from Rathmines in the north to County Wicklow in the south and from Templeogue in the west to the sea.

The draft valuation of Rathdown was issued in March 1849 in the printed Primary Valuation or Griffith’s Valuation, giving the name of each householder and placing a price on dwelling houses, buildings and land that varied from wide tracts of mountain to tiny patches of garden. The procedure allowed every occupier to appeal their valuation. Once finalised it would be used as the basis of two local taxes: poor rates were used to make provision for the poor of the area and county cess was collected by the local authority (in this case the Grand Jury of Co Dublin) to pay for services including roads and bridges. The taxes were levied at a rate per pound of valuation, hence the term “rateable valuation”, and were basically the same as the rates still paid today on some properties.

The valuation was made “in utter ignorance” and “is so monstrous in principle, and so erroneous in details, that the system could not be improved by any species of tinkering”

Appeals in Rathdown were to be heard at the beginning of June, three months after the draft valuation. However, within a few weeks public protest developed, aided by the newspapers that took up the cause. Editorials appeared demanding nothing less than the quashing of the valuation, claiming that the newspaper was inundated by letters of complaint from every part of the barony, that the valuation was made “in utter ignorance” and “is so monstrous in principle, and so erroneous in details, that the system could not be improved by any species of tinkering”. This demand ignored the fact that the valuation applied to the entire country. Objection was also made to Dundrum as the location of the appeal court and the inhabitants were urged to “assemble and protest against this most inequitable valuation”. At least one such meeting was held in Kingstown (Dún Laoghaire) at the beginning of April.

The Commissioner of Valuation, Richard Griffith, was not pleased and responded testily in letters to the newspapers. He considered the protests were over-reaction by the priviledged inhabitants of these areas, while implying that the objections were founded on a sense of entitlement. He was probably also angered by the accusations of incompetence, as great pride was taken in the work.

Large numbers of appeals had been made in other baronies, but the level of public attention in this case was new. Similar objections had been made the previous year in the adjoining barony of Uppercross but were rectified after examination by a deputation of gentlemen (“steady men of business”).

Griffith described Rathdown as containing “Kingstown and villa tenements and the rental is very high”. The draft valuation confirms that a large proportion of houses in this barony had a high valuation, such as those in Longford Terrace at over £100 each, but it also included property at every level, such as the houses of the Ballast Board in Pilots’ View, Bullock at £6-10s each. Griffith claimed that there was an “outcry made by 10,000 occupiers of tenements who, apprehending that other assessments may be levied under my valuation, have one and all objected to it as excessive”. There were “public meetings and remonstrances as well as long editorial articles written in a very unfair and hostile spirit deprecating the valuation and calling it unjust and capricious”.

Who will say that a house in the town of Naas would bring the same rent as a similar house in one of the favoured terraces of Kingstown?

He explained that the “valuation of villas and bathing lodges, and also bathing towns, as Kingstown, is a very difficult undertaking, as the yearly value depends as much, and in many cases more, on a beautiful view or fancy site, than on the ordinary value of the tenement”. He deplored the comparisons made with other parts of the country: “tenements in the barony of Coolock and a tenement held by an extensive merchant in Kingstown” were not the same and “who will say that a house in the town of Naas would bring the same rent as a similar house in one of the favoured terraces of Kingstown?”.

Griffith also took pre-emptive action by writing a letter to the MP William Monsell, asking him to show it to other members of parliament and attributing the support of the newspapers to the fact that their editors nearly all occupied villas in Rathdown. Although expressing surprise at the public confusion, he acknowledged that the matter was complicated with different methods used to establish the valuation for poor rates and for county cess. The difficulty lay in explaining how the latter was 25 per cent lower than the former and both were different from the separate (and now obsolete) valuation for the poor rates that had been made only a short time earlier. To make matters worse, this valuation was based on rents, which had fallen in the three years between the work of gathering the information and the publication of the draft valuation. He maintained that these matters would be taken into account at the appeal hearings.

However, despite Griffith’s annoyance at the public response, concessions were made in the face of the protests in Rathdown. It was agreed that appeal courts would be held in several other places as well as Dundrum and that deputations of gentlemen for each locality would examine incorrect valuations and report in advance of the appeals. Most significantly, the valuations were reduced across the board, although mostly by small amounts, such as £5 in Longford Terrace and 10 shillings in Bullock pilots’ houses. This can be seen as something of a victory for the householders of Rathdown, although rather less than quashing.

The ratepayers’ fears that the valuation might be applied to other uses turned out to be well founded. Within a few years it was used for income tax and by the early 20th century it had developed as a guide for many state interventions, including death duty and stamp duty, and as a threshold of eligibility for many benefits.
Frances McGee worked as an archivist in the National Archives of Ireland for 40 years. Her book, The Archives of the Valuation of Ireland, 1830-1865, is published by Four Courts Press (240pp, €19.95)