Ghost Wall by Sarah Moss: the problem with the good old days 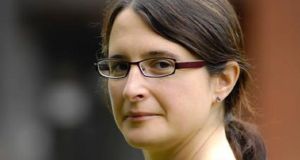 Sarah Moss: her sixth novel has important lessons about idealising the past

“They bring her out… she stumbles. They hold her up. No need to be rough, everyone knows what is coming.”

A girl is bound, frightened and about to be cast into a bog. All of this happens, not just with the acquiescence of her family and neighbours, but with their encouragement. An acceptance of the ways of ritual sacrifice; of the lure of a bountiful harvest, the necessity of offering something to the land. It’s no surprise that the sod-turning opening of Sarah Moss’s sixth novel begins in the past. In her previous work, she moved easily from Victorian Manchester to 19th century Japan, and while the nightmare prologue of Ghost Wall may be historical, it haunts the present-day dreams of a teenage girl called Silvie. That is, when she manages to sleep, given that her nights are spent in a rudimentary bed, handmade by her tyrannical father Bill, who has brought Silvie and her mother on an experimental archaeology trip. Along with a university professor and three students, they are there to live immersively in the past, recreating life in the Iron Age.

The bed, the borderline starvation and the wearing of prehistoric tunics are all part of a quest for authenticity, but it becomes quickly apparent that Bill’s views – on politics, women and power – are also relics. He is a clever amateur historian; a bus-driver with a brick-sized shoulder chip about his lack of education, compared to the middle-class students who are also taking part in the camp. He scoffs at their waterproof tents, their inability to skin animals, and bears a particular animosity towards Molly, a young woman who challenges him.

In her previous work, Moss is something of a miniaturist, using a handful of characters in a compressed setting to talk about something bigger, more timeless and external than that small space. Reading Ghost Wall in the context of contemporary Britain only serves to highlight the folly of wishing for the good old days. Bill’s sepia-tinted nationalism is a naive romanticisation, a jingoistic longing for simpler time.

The book can be read as a Brexit fable, where seppuku levels of self-sacrifice are forged with lemming-like gusto. Bill’s violence and dismissal of women – their views, their bodies, and very act of being alive – is a warped one that finds itself paralleled all over modern discourse, from online life to politics. He argues with his daughter about sanitary protection and how “women managed well enough back in the day”. Silvie briefly loses her fear and finds her voice: “Or they died in childbirth, what with rickets and no caesarians, but you won’t be wanting me pregnant, Dad, for authenticity’s sake?”. The words are barely out of her mouth, when she realises it’s too late, “the slap already airborne”.

Silvie is hemmed in and powerless, an only child to a man who is violent to her and her mother. Further isolated by the archeological game her father insists on, and by her emerging queerness, she recognises her tentative feelings for Molly.

Moss expertly captures the hinterland of being an older teen who is not yet an adult, splicing Silvie’s encounters with shame, curiosity, desire and fear. This is the spectrum of how she regards and navigates the world, which for now, feels nothing but autocratic. There is a spring-taut tension embedded in the pages, which is built up slowly by a number of means. Moss dispenses not just with speech indicators, but runs all the dialogue into regular sentences. It’s both breathless and indistinguishable from the other text, as though Silvie’s voice hides in plain sight, often fearful of what it articulates: wrong words, wrong tone. Slap.

The book’s title is a type of defensive wall – mentioned by one of the characters – that a tribe or clan would have decorated with skulls or bones to scare away invaders. Ghost Wall also operates within a supernatural framework, not least because the spectre of violence, submission and male dominance hovers throughout. It also nods to elements of of folk horror, particularly The Wicker Man, in which a pastoral idyll becomes the site of destruction and fear.

The novel gradually narrows its focus, and the ending becomes a bottleneck from which character and reader feel they can’t escape. It is either an extraordinary mirroring of everything that has gone before, or asks the reader to take a huge leap, even beyond fiction. This doesn’t mean that the two are mutually exclusive, or that it doesn’t work, and in many ways, it feels like the only way to play it out. Moss’s brevity is admirable, her language pristine. This story lingers, leaving its own ghosts, but with important lessons for the future of idealising the past.