My Thoughts Exactly by Lily Allen: a strangely persuasive read

From childhood to pop stardom, this memoir offers a frank look into the drugs, sex and sadness of Allen’s ‘world’ 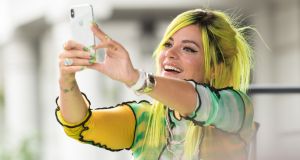 That’s a sly joke. I assure you she is used to them. Allen has routinely been accused of being a fraud. She comes from an undeniably privileged, if ill-functioning, background, so it’s unsurprising that her autobiography has been greeted with that grand internet chorus of who cares? I suppose – for the sake of the next few paragraphs – I do.

Across a number of confrontationally-named chapters (Sex! Rock Bottom! Sex Part Two!) Allen takes us into her “world”. Celebrities always have worlds, while the rest of us merely have lives. It’s a comprehensive view, moving from her childhood, through the height of her musical success to her later marital and financial troubles. She doesn’t hold back, and the book is commendable for its frankness.

At best, reading it felt like spending time with a ridiculous, outrageous friend. At worst, it was like being left stranded with a girl you just met at the campsite on the last day of a festival. She, quite simply, won’t stop talking, and no small amount of what she is saying is questionable. It’s always, and I mean always, about Allen. She admits to being a narcissist. A therapist might ask how she feels about that. She seems pretty cheerful. She gets it from her dad.

There’s something about celebrity memoirs that brings out the worst in critics, as if being confronted with the vulgar desperation – the acres of unsightly flesh – that fame demands makes us furious. Where are the nice sentences? What happened to the plot? There are none. They left long ago. It’s hard not to submit here, cave in, and hate this book with energy and amusing force, but there are two elements that elevate My Thoughts Exactly.

The first is Allen’s resilience. Although she has lived a life cushioned by exceptional wealth and entitlement, it hasn’t been easy. The stillbirth of her child, George, and the confusing guilt, shame and sadness that followed is beautifully handled. She writes well about the emptiness she felt, and the postnatal depression that went undiagnosed because she refused to acknowledge her pain. A mother who has lost a child is too often pushed into a limited role, portrayed only as sad, hysterical or broken. There is no right or wrong way to feel after a tragedy of that size. Allen does her best to open up that conversation.

The second topic Allen tackles with precision is how it feels to be treated as a sex object. She recounts a number of troubling encounters. In places, her descriptions reminded me of the strip club scenes in Rachel Kushner’s recent novel The Mars Room. These are uneasy transactions. She is slowly being worn down. A light is being dimmed. When she eventually lashes out and tries to reclaim a sliver of power (some aspects of which have already, unnecessarily and salaciously, played out in the tabloid media) it seems out of the blue, but the logic is in the years preceding it.

It seems odd to admit that I was rooting for Allen, a privately-educated pop star, but such is the strangely persuasive nature of My Thoughts Exactly. There is one scene in particular where you get a glimpse into what drove her musical ambitions. She is due on stage at a festival after a singer who had humiliatingly rejected her years earlier. This is it. She never wanted to be just some girl, a groupie.

Does she enjoy this moment of quiet victory? Does she deliver to him only a polite, bittersweet, almost cinematic, nod as she takes the microphone? Does she hell. Afterwards, she gets drunk, screams, cries and has to be removed from the venue. Well, here’s to her. It’s a party. But like any party, you can be sure there’s someone, nameless and out of sight, cleaning it all up.