Signifying Nothing: A story by Anna O'Connor 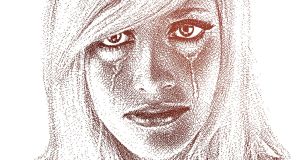 Tears pooled in my eyes, I let them come. They flowed, as sure and as steady as the waves, as the cars. Photograph: iStock

I liked it here. The moonlight was soft, casting a calming glow around the room and the gentle hum of music slowed my thoughts. I sat by the windowsill, watching the constant flow of waves hit against the shore outside, and the steady stream of passing cars in the distance above the cliffs. Children raced past, their costume cloaks spreading out behind them like wings, their laughter carrying in the breeze like wind-chimes.

In that moment, I was reminded of him.

It was funny seeing this room so empty. I was used to a thrilling busyness and seeing it now, void of people, set an uneasy feeling in my gut. The cold danced like pinpricks on my skin and I leaned my head against the window. The lights outside blurred through the glass, creating flares of yellows and reds. I allowed my breath to fog up the window, tracing an unbalanced heart through it with shaking fingers. It felt silly and childish, but oddly comforting. I closed my eyes, and when I opened them again, he was standing there. An outline of a figure against the dim silver light.

He took my hand and led me onto the floor.

We moved in stirring images, our bodies moving in different times, but still as one, together. His smell was familiar, a blend of warm spices and crackling fires. His eyes were autumn leaves and his hands, made for mine. It felt like my soul was singing, soaring above the dark clouds that hung in the skies outside in the cold October night. Above the sea, above the cliffs, above the highest snow coated mountaintop.

No rain could touch me here. No clinging fog. No winter winds.

Here, with him, I was safe.

A warm feeling opened inside me. It was the feeling of coming home.

But I wasn’t. I opened my eyes, in real life this time. Not just a dream, a distant memory of what once was, a wishful thought of what could have been. A make believe scene, performed by actors, when the curtain is lowered and there’s no one around to watch anymore. The end of a story; a chapter that no one will ever read.

A semblance of a goodbye.

Tears pooled in my eyes, I let them come. They flowed, as sure and as steady as the waves, as the cars.

I looked down the long room. Once more, he was standing there. Different this time. Fainter. He stared at me with autumn leaves and I stared back with watered evergreen. He raised his hand to his heart. I did the same. He nodded. Slowly, I returned it. After a moment of staring, he turned, leaving through the old wooden door.

Not a semblance this time. A real goodbye.

I swayed gently in the soft morning light of spring, the sun casting a warming glow through the window, landing at my feet and creating dancing shadows on the crumbling wall.

He followed my movements- like he always did- as they morphed from fleeting indications to fully fledged dances. Our eyes flickered to meet the other’s and there was a tenderness in his that wasn’t there before.

Slowly, we sat, faces unmoving, afraid to break this bond that had formed between us.

His expression gave no reflection of his coming intentions, his next move a mystery, an unknown journey.

I became choked with a sudden emotion. I was afraid.

But I could not be afraid. Because spring is for new beginnings. When hope blooms in abundance and nature itself makes the once impossible journeys seem simple, easy.

He took my hand and pointed outwards in a sure movement. Hesitantly, I followed suit.

My heart was suddenly filled with a glowing happiness. A warmth blossomed inside me that I had never felt before.

For in that moment, I realised that this was not a goodbye. It was a hello, a long waited reunion.

And we would never have to say goodbye again.

This story took shape at one of the workshops run by Fighting Words, which was founded by Roddy Doyle and Seán Love in 2009 to nurture young writers around Ireland. It is now in Dublin, Belfast, Cork, Mayo, Wicklow, Galway, Donegal, Kerry, Wexford and Kildare