The Bears and the Broccoli 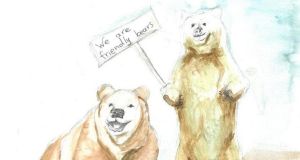 There was once a bear called Snuggles William who was afraid of broccoli. He wanted to be the first bear to ever play football.

He only had one friend and he thought he could make new friends playing football. His friend’s name was Zack.

Zack was taller than Snuggles, a lot taller. The bears were both afraid of bear hunters because the bear hunters needed to survive by catching bears. Snuggles told Zack that he really wanted to play football.

“I’d really like some new friends,” Snuggles said to Zack.

“Why don’t we join the football team?” said Zack.

The local team was called the Jungle Team.

“What if the humans are scared of us?” said Snuggles. “We will just tell them that we are friendly and hope they believe us,” said Zack.

“Let’s go down to the Jungle Team and tell them that we are friendly, not scary.”

The day they went to meet the team, they arrived to find them eating broccoli as part of their training diet. When the team saw the bears they got a fright and they dropped all the broccoli!

“I’m off! said Snuggles when he saw the broccoli.