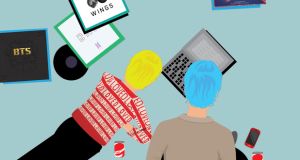 Jimin rushed through the busy streets of Seoul, the rain soaking through his hoodie and his shoes. He shivered violently as he walked to his friend Yoongi’s house. His blonde hair stuck to his forehead as he swerved around the other people on the street. He grunted as the rain became heavier and people began moving faster to find shelter from the heavy downpour. The water under Jimin’s feet splashed as he started to run, no longer caring if he got wetter.

He turned into an estate he knew like the back of his hand. He mustered up his remaining strength and bolted to Yoongi’s house. Jimin knocked rapidly on the door, yelling at his friend to open it. The door slowly opened to reveal his blue-haired, brown-eyed friend. “You do know that you can just walk in, right?” Yoongi said as he stepped aside to let Jimin in.

Jimin rushed inside and removed his shoes, sighing in content as the heat of the house engulfed his cold, shivering body. “I have some spare clothes you can change into,” Yoongi said as he closed the door, not wanting to let the heat out. “Thanks Yoongi,” Jimin said before running to Yoongi’s room and grabbing some clothes.

After he changed, Jimin went to the living room where he found Yoongi lying face-down on the couch scrolling through his feed on Instagram. Jimin smirked and snuck up behind Yoongi before sitting on his back. To Jimin’s surprise, Yoongi didn’t move. He just continued to scroll through his phone. “Are you not going to tell me to get off?” Jimin asked, tilting his head to the side.

“No, because yelling takes effort and I want to conserve my energy,” Yoongi answered, turning off his phone and grabbing the television remote. Jimin grabbed the remote from Yoongi and began flipping through the channels, soon finding the latest episode of Hwarang, Jimin’s favourite show. Yoongi chuckled at how much Jimin liked the show. He had to admit, he did find it cute that Jimin was so heavily invested in such a short show.

Yoongi got up and went to the kitchen, made some popcorn and grabbed a bottle of Coca-Cola with two glasses, and returned to the living room.

When he walked in, Jimin was hunched over, watching the scene intently, as though waiting for a plot twist. Fortunately, the ads began to play. Jimin groaned in frustration, leaning back into the couch. Yoongi chuckled and walked over to the coffee table, putting down the popcorn, Coca-Cola and glasses. Yoongi sat next to Jimin and ruffled his hair. “Stop . . .” Jimin whined, swatting Yoongi’s hand away like a fly. “I like doing this though. Plus, since I’m older, you have to respect me,” Yoongi said as he laid his head on Jimin’s lap.

Yoongi clicked his tongue and rolled his eyes, amused at how stubborn Jimin was. Just as the show was about to come back on, the lights in the house went off. Due to the sudden and unexpected darkness, Jimin squealed and jumped.

Yoongi laughed at how frightened Jimin was. He held his stomach and tried to regain his breath as Jimin huffed and folded his arms, pouting like an angry child.

“Wait here, I’m going to put the fire on and find some candles,” Yoongi said as he stood up and walked to the open fireplace. It took him a few minutes to get the fire going but eventually it took. From the kitchen utility he grabbed a bag of tea lights and placed them around the house, lighting them as he did so.

He grabbed his laptop from his room before rushing back to the living room. Jimin waited patiently on the couch, sighing in discontent as he wouldn’t see the ending of the episode. Yoongi turned on his laptop and waited for it to power up. He began looking through the movies he had downloaded. Jimin looked at all the movies before grabbing Yoongi’s wrist to stop him scrolling past the movie he wanted to watch. Yoongi looked at him in confusion then looked down at his wrist. Jimin removed his hand then pointed at the movie he wanted to watch.

“Train to Busan? We’ve seen that almost 1,000 times,” Yoongi sighed. “It’s a good movie and I know you like it,” Jimin said as he poked Yoongi’s arm. Yoongi sighed in defeat and put on the movie.

As the opening ads began to play, Yoongi poured some Coca-Cola into the two glasses before handing one to Jimin and grabbing the bowl of popcorn. The movie began to play and soon Jimin and Yoongi were engrossed. Reaching for the popcorn at the exact same moment, their hands touched. Jimin was the first to pull away, a faint pink blush rushing his cheeks.

Yoongi, on the other hand, was still thinking about the softness of Jimin’s touch when he felt a weight on his shoulder. He turned his head to see a peacefully sleeping Jimin. Jimin’s hair fell over his eyes and his cheeks still had that pink blush. Yoongi smiled and laid Jimin’s head on his lap. Yoongi removed his hoodie and used it to cover Jimin. As Jimin slept, Yoongi continued watching the movie, running his fingers through Jimin’s hair. As the movie ended, Yoongi started another but kept it at a low volume, not wanting to wake the sleeping Jimin. Yoongi continued watching movies until his laptop died at around 3am. Yoongi felt so comfortable in Jimin’s presence, he slept better that night than he had ever slept before.