Secrets threatened with exposure and a carnival of dark delights

Crime writing review: The Wife by Alafair Burke – The Liar’s Girl by Catherine Ryan Howard – Money in the Morgue by Stella Duffy – While You Sleep by Stephanie Merritt – That Old Black Magic by Cathi Unsworth 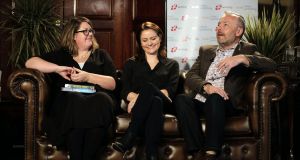 NYU professor Jason Powell, chair of FSS Consulting, TV pundit and bestselling author of Equalonomics, the cutting edge non-fiction title everyone at least pretends to have read, dismisses an intern’s accusation of sexual assault as ridiculous; you can’t say anything these days without melting the special snowflakes. Rachel, the intern in question, when advised that there isn’t much chance of a case being taken, asks if she should have waited for him to rape her so she’d have medical evidence. The DA’s office leaks the details to the press, and when Kerry Lynch, a client of FSS, comes forward and accuses Powell of rape – and claims she has that all important DNA evidence – things look bad for Jason, though not quite as bad as they will when Kerry goes missing.

“How well do you know your husband, Angela?” Detective Corrine Duncan asks, and it’s a question that echoes down the pages of The Wife (Faber & Faber, £12.99), Alafair Burke’s timely, devious marriage thriller. Angela Mullen has her own story – before Jason married her, she went off the map for three years, returning with a young son and a lot of secrets. Now those secrets are threatened with exposure, and the pleasure of this ingeniously plotted, psychologically acute novel lies in watching a desperate woman finally take control of her life. “We were supposed to have a normal marriage, but one half of the couple – me – wasn’t normal, so neither were we.”

The Liar’s Girl by Catherine Ryan Howard (Corvus £12.99) opens in that quintessential Dublin student party location, a flat in Rathmines. A drunk girl can’t quite believe that the magnets she sees on the fridge door are her own, “the ones her airline pilot mother has been bringing home for her since she was a little girl”. Later that day her body will be recovered from the Grand Canal. It appears there is a serial killer at work – but the real Canal Killer, Will Hurley, responsible for five murders, has been in a psychiatric institution for the past 10 years. Is he running a copycat? Will is prepared to talk – but only to his ex-girlfriend, Alison Smith, who has spent those 10 years in the Netherlands, hiding from herself and from her history. Flashing back to Alison’s first year at university, her relationship with Will and her problematic friendship with Liz, who was the killer’s fifth victim, The Liar’s Girl is a tightly structured, highly suspenseful follow-up to Howard’s excellent CWA Dagger-nominated debut, Distress Signals. The city of Dublin is very well rendered, even if Howard has manipulated much of it to her own ends, but what stood out for me were two immensely powerful scenes between women: a showdown with Liz, where Alison speaks alcohol-basted truth to her mean-girl friend; and a highly emotional confrontation with her mother, who urges her daughter to let go of the past: “The problem with you, Alison, is that you had your teenage years too late. You were no trouble at all to us until you went off to college. You decided to have all your adolescent angst then . . . then Will happened and you got stuck there.”

Along with Dorothy L Sayers, Agatha Christie and Margery Allingham, Ngaio Marsh was one of the original “Queens of Crime”. Marsh’s last Inspector Alleyn novel was published in 1982, the year she died. Now, working from three chapters and a loose synopsis, Stella Duffy has written Money in the Morgue (Harper Collins £14.99), the first Ngaio Marsh mystery in 35 years. Set in an isolated hospital in rural New Zealand just before Japan enters the second World War, a Golden Age cast of characters is trapped by a storm. When a bag of money disappears from a locked safe and a murder is uncovered, how fortunate is it that Inspector Alleyn has been staying unannounced in a private room, involved in a secret counter-espionage mission for the New Zealand government?

PD James praised Marsh for the power of her characterisation and the quality of her prose, and Stella Duffy has more than succeeded in sustaining these standards in this elegantly written and always amusing novel. Like Marsh, Duffy is also a theatre artist, and there is an exhilarating level of theatricality at play throughout, not least in a denouement staged with more secret passages than were dreamt of in Ronald Knox’s Ten Rules of Fair Play.

“Everyone who comes here is trying to escape from something.” So says Charles Joseph, owner of the bookstore on the remote Scottish island Zoe Adams has fled to, leaving behind her American family and some undisclosed trauma. Staying in the refurbished McBride house, where a hundred years ago a young widow and her son died in mysterious circumstances, Zoe is assailed by strange and disturbing events: doors that crash open or jam shut; voices keening or laughing menacingly; Skype calls from her son when there’s no internet signal; erotic dreams that feel thrillingly and terrifyingly real. While You Sleep (Harper Collins £12.99), Stephanie Merritt’s beautifully written, wonderfully atmospheric new novel, works perfectly well as a psychological thriller in which demons from the past must be vanquished, but Zoe’s demons are real in more than one sense, and the narrative’s binding of supernatural threat and physical peril is superbly done. Merritt writes especially well about the rekindling of sexual desire as an index of recovery; Zoe’s intensely sexual dreams are of possession by an incubus; in their aftermath she feels “more awake, more aware of her own body . . . unusually vivid.” Folk Horror has been having a cultural moment in recent cinema; While You Sleep is a superlative new entry in the genre’s prose ledger.

Dennis Wheatley’s The Devil Rides Out is a key film in Folk Horror mythology. Cathi Unsworth has hailed Wheatley as her avuncular spirit guide during the writing of That Old Black Magic (Serpent’s Tale, £12.99), and if you set aside the old rogue’s snobbery, sexism, right-wing politics and indifferent style, Unsworth’s delirious, hugely enjoyable novel of Nazi spies, folk song, witchcraft and conspiracy is undoubtedly Wheatleyesque. With an exquisite feel for the English countryside, a sure eye for a lavish occult ritual and a colourfully sketched collection of raffish, bohemian characters, That Old Black Magic is a carnival of dark delights, an alternative history time capsule in which the most important journalists report on matters supernatural and MI5 and Witchfinders go hand in glove, in which a woman’s body is found embedded in a dead Wych Elm and Lord Haw Haw has pledged allegiance to his lord and master, Satan.

Declan Hughes is a novelist and playwright.