What have the Irish ever done for us? (More than you might think)

The Irish are known for many things, but perhaps not for splitting the atom and curing leprosy. We set the record straight 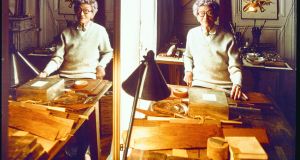 It’s that time of year again when shamrockery, Guinness and “Kiss me I’m Irish” hats come to the fore in presenting a particular image of “Irishness” to the world.

When the sons and daughters of the diaspora will celebrate “Patty’s Day” by eating corned beef and cabbage, downing green beer and jumping around to the House of Pain.

It’s all harmless fun, of course. Though some may not approve of the version of Ireland it portrays, our politicians and tourism agencies will wring the very last drop of green from St Patrick’s Day for maximum fiscal effect.

There is another Ireland that has been making its way in the world for centuries, however, making a positive impact around the globe and what better time to celebrate some of those real Irish achievements.

The son of a Methodist minister and born in Dungarvan, Co Waterford, Ernest Walton was a research scholar at Cambridge where under the guidance of Sir Ernest Rutherford with John Cockcroft he successfully managed to split the nuclei of lithium atoms by bombarding them with a stream of protons. It was the first time an atom had been split and it was for this achievement that Walton and Cockcroft were awarded the Nobel Prize for physics in 1951.

Modernism
One of the most influential figures in the Modern movement in design and architecture was an Irishwoman from Co Wexford. Eileen Gray was little-known in her homeland during her long lifetime but in recent times she has been recognised as one of the most important and influential contributors to Modernism.

A cure for leprosy

Cork doctor Vincent Barry played a vital role in developing a cure for leprosy one of the most feared and misunderstood of diseases. He led a small team at Trinity College working on the related disease tuberculosis. In 1954 Barry was able to synthesise the compound Clofazimine which would become a crucial part of the multi-drug treatment now used for leprosy around the world.

The Angel of the Delta

Margaret Haughery emigrated to the United States as child to escape the ravages of the famine in south Leitrim and once in America was orphaned when her parents were killed in a yellow fever outbreak. Her life was further blighted by tragedy when her own husband and only child also succumbed to disease. Despite her personal tragedies she successfully managed and opened many orphanages in New Orleans becoming known locally as “The Angel of the Delta”. When she died in 1882 her funeral was one of the largest the city has ever seen such was her standing in the community.

Developed by Charles Parsons, son of Anglo-Irish astronomer William Parsons of Parsonstown (now Birr, Co Offaly) the steam turbine was a major advance in steam engine technology. It enabled the direct generation of electricity from steam power and was installed at power stations around the world as well as transforming marine propulsion.

Righteous Among the Nations

Mary Elmes, a Cork woman became the only Irish citizen to be honoured as Righteous Among the Nations by the State of Israel. She joined the University of London Ambulance Unit in Spain to help the innocent victims of the vicious ongoing Spanish Civil War and later worked in refugee camps in southern France following the outbreak of the second World War. At great personal risk she saved the lived of hundreds of Jewish children by smuggling them to safety, often in the boot of her car.

He was a banker, speculator and economic opportunist and a man of great intellectual ability, Kerryman Richard Cantillon is often cited as one of the founders of modern economics. In 1730 Cantillon wrote the work that he is now remembered for, Essai Sur La Nature Du Commerce En Général (Essay on the Nature of Trade in General), inspired by his experiences during the Mississippi bubble. In Essai, as it is commonly abbreviated, Cantillon outlines a systematic modern economic theory covering a range of now core economic ideas including cause and effect, monetary theory, entrepreneur theory and spatial economics. Cantillon’s Essai is now regarded as having huge significance in the development of modern economic theory and influenced many of those who followed including Adam Smith, who cited it in his Wealth of Nations.

Mary Harris, better known as “Mother Jones”, rose from humble beginnings in Cork city to become one of the most effective labour activists in the United States. Once described as “the most dangerous woman in America”, she was a tireless campaigner for the rights of the poor and the working class particularly women and children. She once led a march of women and children from Pennsylvania to the home of President Theodore Roosevelt on Long Island to demand an end to child labour.

Dubliner Edmund Burke was one of the most influential political thinkers of his time. His ideas have had a lasting impact on political discourse in both Britain and America and he is often regarded as one of the founding fathers of modern conservatism. Burke was a vocal critic of British policy towards the American colonies, a policy that would eventually lead to the creation of the United States. He was also a critic of the “mob rule” of the French Revolution and a staunch defender of parliamentary independence.

Dame Ninette de Valois was born as Edris Stannus in 1898 in Blessington, Co Wicklow. When she turned 10 she began attending ballet lessons and became a successful dancer in London with the Ballets Russes under the renowned impresario Sergei Diaghilev. She later founded her own ballet school, the Academy of Choreographic Art, in London in 1926 and established the Abbey Theatre School of Ballet in Dublin. In London she set about defining a new English ballet with its own independent style and approach, founding the Sadlers Wells Ballet School and the Vic-Wells Ballet company that would become the Royal Ballet. She lived most of her life in an unassuming house in Barnes, London with her husband, surgeon Arthur Connell. She passed away in 2001 at the age of 102.
These stories and many more are featured in the new book, What Have the Irish ever done for us? by David Forsythe available now from Amazon