The Oxford Dictionary of Humorous Quotations has no shortage of Irish entries. Here are 10 of the best 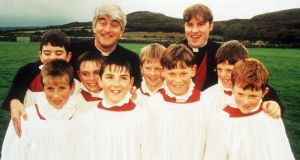 Irish wit and humour are renowned, whether from our comedians or, just as frequently, our politicians. So the Irish are well represented in the fifth edition of the Oxford Dictionary of Humorous Quotations, edited by Gyles Brandreth. With 338 pages of quotations, including more than 1,200 new entries, you need never be stuck for a pithy remark again.

Although Irish women are under-represented, many of our most famous men feature at least once, and Oscar Wilde, topping the poll, has no fewer than 100 quotations. Writers, playwrights and poets appear to be our wittiest grouping, with George Bernard Shaw and Brendan Behan also featuring extensively.

Three quotations from Graham Linehan and Arthur Mathews, in the form of lines from Father Ted, make it in – including the full opening verse of My Lovely Horse in the Animals section – beating their fellow wits Dara Ó Briain and the late Richard Harris, who have one and two quotations, respectively.

Here are 10 of Ireland’s wittiest moments, as featured in the book.

Brendan Behan
Pat: He was an Anglo-Irishman.
Meg: In the blessed name of God what is that?
Pat: A Protestant with a horse.
From The Hostage, 1958

Richard Harris
I often sit back and think “I wish I’d done that” and find out later that I already have.
From the Sun, May 19th, 1988

Oscar Wilde
One of us must go.
Of the wallpaper in the room where he was dying, in 1900

Samuel Beckett
Customer’s voice: In six days, do you hear me, in six days, God made the world . . . And you are not bloody well capable of making me a pair of trousers in three months!
Tailor’s voice: But my dear Sir, my dear Sir, look – at the world – and look – at my trousers.
From Endgame, 1957

Graham Linehan and Arthur Mathews
It’s nice to have a nun around. Gives the place a bit of glamour.
From Father Ted, Grant Unto Him Eternal Rest, 1995

George Bernard Shaw
Alcohol . . . enables Parliament to do things at eleven at night that no sane person would do at eleven in the morning.
From Major Barbara, 1907

Constance Wilde
I think his fate is rather like Humpty Dumpty’s, quite as tragic and quite as impossible to put right.
In 1897

Michael Collins
We’ve been waiting 700 years, you can have the seven minutes.
On arriving at Dublin Castle for the handover by British forces on January 16th, 1922, and being told he was seven minutes late