Irish surnames are among Europe’s oldest; Elizabeth I once banned name O’Neill; a surname is spelled six different ways on one tombstone; Mc and Mac mean same thing 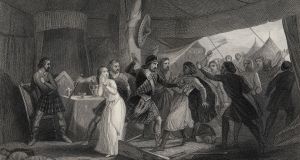 The murder of Shane O’Neill: In the mid-1500s, Sean or Shane O’Neill, the Earl of Tyrone, was causing so many problems for the English crown that Elizabeth I banned the name O’Neill, on punishment of death and forfeiture of property. She would not be pleased to know that today O’Neill is a top ten Irish surname, and Sean is a top ten Irish given name. Photograph: Getty Images

1. Surnames developed in Ireland as early as the tenth century, making them among the first in Europe. The earliest recorded surname is Ó Cléirigh. There are now four O’ names in the Irish top 10 (O’Brien, O’Sullivan, O’Connor, O’Neill).

2. Surnames starting with Mac, meaning “son of”, were in general use in Ireland by the late 1100s. However, the O and Mac names weren’t always family names in the usual sense. If warfare led to land passing to the control of a new clan, the local population often adopted the name of the new chief to help them keep their life and liberty.

3. A century after the successful conquest of England in 1066, the Normans turned their attention to Ireland. Over time, many Norman lords became largely independent of London, and often adopted Irish customs, including speaking Irish and taking Irish names. The government in London became so concerned that a fourteenth-century law required every Englishman in Ireland to use the English language and have an English name.

4. In the mid-1500s, Sean or Shane O’Neill, the Earl of Tyrone, was causing so many problems for the English crown that Elizabeth I banned the name O’Neill, on punishment of death and forfeiture of property. She would not be pleased to know that today O’Neill is a top ten Irish surname, and Sean is a top ten Irish given name.

5. In the 1600s, when English rule intensified, the prefixes O and Mac were widely dropped because it became extremely difficult to find work if you had an Irish sounding name. However, in the 1800s many families began reinstating the O and Mac prefixes. Occasionally, the wrong prefix was adopted, particularly adding an O when the original prefix was Mac.

6. Curiously, putting back the prefix hardly ever occurred with some surnames. For example, originally Murphy was Ó Murchadha, but rarely appears with the prefix. Murphy has been the most popular Irish surname for at least a century, with the highest concentration now in Co Wexford. But more Murphys live in Britain than in Ireland, with the highest concentration in Liverpool. There are more than 300,000 Murphys in the US, compared to 55,000 in Ireland.

7. A few hundred years ago people paid little attention to how names were spelled. One extreme example is on a tombstone in Ireland where the surname for a family of six is shown as McEneaney, McAneany, McAneny, McEnaney, McEneany – and Bird (from the mistaken belief that the name comes from éan, a bird).

8. Strictly speaking, there is no difference between Mac and Mc. The contraction from Mac to Mc has occurred more in Ireland than in Scotland, with two out of three Mc surnames originating in Ireland, but two out of three Mac surnames originating in Scotland. McCarthy is the only Mac/Mc name in the Irish top ten surnames, and MacDonald is the only one in the Scottish top ten.

9. For family and professional reasons, Marilyn Monroe had a number of other surnames: Mortenson, Baker, Dougherty, Norman, Lind, DiMaggio and Miller. She had to drop her Irish name, Dougherty, because 20th Century Fox thought it too difficult for American movie-goers to pronounce. Today, actors are much more likely to keep their own names – such as Saoirse Ronan and Ciarán Hinds.

10. Parents have always been more adventurous when naming their daughters compared to naming their sons. As far back as 1281 the Archbishop of Canterbury warned priests against baptising girls with frivolous names. Parents of babies born in 2015 in Ireland used nearly 4,500 different names for baby girls but fewer than 3,500 names for boys, even though there were more baby boys than girls.

11. Recently, there has been an international trend for parents to give their children uncommon names. Hundreds of US parents have even named their daughter Unique, believing that the name was... unique. In Ireland, parents used four times more names in 2015 compared to 1965, even though the same number of babies was born in these two years.

12. Irish parents have become much more willing to give their children names that clearly reflect their Irish heritage. There are nine such names in the 2015 top twenty: Conor, Sean, Oisin, Cian, Fionn and Liam for boys; and Aoife, Saoirse and Caoimhe for girls. Half a century ago there were only five such names: Kevin, Declan, Bridget, Deirdre and Eileen.

Hello My Name Is: The Remarkable Story of Personal Names by Neil Burdess is published on November 3rd by Sandstone Press at £14.99