Waterstones praises author for ‘cementing reputation as voice of her generation’ 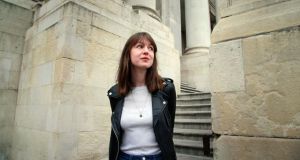 In a win for literary fiction amid declining sales, Sally Rooney’s novel Normal People has been named Waterstones book of the year.

Rooney’s second novel, which follows two young people falling in love in post-Celtic Tiger Ireland, has sold just under 41,000 copies in hardback in the UK since it was released in August – five times the hardback sales of her 2017 debut, Conversations With Friends. At 27, Rooney is the now the youngest winner of the award, which goes to the title which staff at the UK’s biggest bookshop chain most enjoy recommending.

“I’d like to thank the booksellers at Waterstones for supporting this novel so wholeheartedly,” said Rooney. “In the production of books, the work of booksellers – as well as delivery drivers, paper-mill workers, typesetters, proofreaders, and many more – is just as important, really, as the work of writers. So I would like to extend my thanks, if I can, to everyone whose hard work has been so vital to the writing and publication of this novel. I am very touched by the honour.”

Bea Carvahlo, fiction buyer for Waterstones, said the reader response to Normal People had been astonishing. “As well as the universal praise, it has been a huge word-of-mouth hit,” she said, citing examples of customers returning to buy multiple copies as gifts. “Normal People cemented Sally Rooney’s reputation as the voice of her generation and one of the most exciting novelists around today. Its success is testament to the health of literary fiction and demonstrates that there is still significant appetite for excellent storytelling.”

The award, established in 2012, tends to go to books that are already bestsellers in the run-up to Christmas. It has previously been won by the late American author John Williams for his posthumous hit Stoner, the cookbook Polpo by Russell Norman, and last year’s choice, Philip Pullman’s La Belle Sauvage.

Also up for the title this year were journalist Dolly Alderton’s debut memoir Everything I Know About Love, Isabel Hardman’s Westminster study Why We Get the Wrong Politicians, Madeline Miller’s novel Circe, nature poetry collection I Am the Seed that Grew the Tree, colourised photography book The Colour of Time, legal exposé The Secret Barrister and Henry Eliot’s publishing history The Penguin Classics Book. – Guardian

East of Eden by John Steinbeck